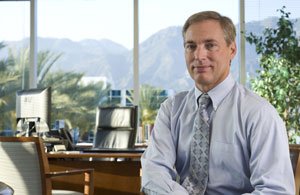 Location. The firm is based about 250 miles north of Rio de Janeiro and it represents a huge opportunity for Tetra Tech as the company tries to break into Brazil, which has a large and fast-growing economy but a reputation for being unfriendly to foreign businesses.

“While this entity is primarily focused on mining, I do expect they’ll give us access to many of the very large industrial clients that are located in Brazil,” Batrack told investors on a conference call this month.

Construction and engineering firms see plenty of opportunity in Brazil, which has vast mineral resources, offshore oil reserves and massive infrastructure needs, especially as the country prepares to host soccer’s 2014 World Cup and the Olympics in 2016. But relatively few U.S. engineering companies have been able to tap in as they face competition from entrenched local players helped by rules that favor domestic businesses.

Pasadena’s Jacobs Engineering Group Inc. and privately held Parsons Corp. have no operations in Brazil. Downtown L.A. engineering and technical services company Aecom Technology Corp. has a small Brazilian presence, with just 140 employees. Aecom also has a contract to design a master plan for the Olympic Village in Rio.

Aecom and Jacobs officials have said they want to acquire Brazilian firms or otherwise do more business there. An Aecom spokesman said he could not provide an update on the company’s acquisition plans. Jacobs officials did not return calls for comment. A Parsons spokeswoman declined to comment.

Analyst Andrew Wittmann, who covers Tetra Tech at investment firm Robert W. Baird & Co. Inc. in Milwaukee, said it’s a good move for Tetra Tech and will help the company establish a foundation in Brazil. However, Wittmann said he’s not sure how well expansion will play out.

“The company has alluded to the fact they’d like to use this as a launching pad, and certainly having a presence there will help their chances,” Wittmann said. “But growing to serve customers (in Brazil) that aren’t legacy customers is difficult.”

Under the deal announced this month, Tetra Tech will acquire the mining engineering practice of CRA Engenharia Ltda., part of Waterloo, Ontario’s Conestoga-Rovers & Associates. Tetra Tech did not disclose financial details of the deal, which will be finalized next month.

The practice was established in 2005 in the southeastern city of Belo Horizonte, the capital of the mineral-rich state of Minas Gerais. CRA specializes in engineering, construction and maintenance work for companies mining iron ore and precious metals.

Tetra Tech started looking for an acquisition in South America about a year ago as it saw major mining firms ramping up their Brazilian operations. Those developments presented opportunities for contracting with the majors. For example, London mining giant Anglo American PLC is expanding an iron ore mine in Minas Gerais and expects to reach full production levels in 2014. Tetra Tech has worked with Anglo American in the past.

“We really want to provide the mining majors – Rio Tinto, Anglo American, others – with consulting and front-end engineering support,” Batrack told the Business Journal last week. “That’s what brought us initially into Brazil.”

The acquisition of CRA began last year when Tetra Tech purchased a small Chilean engineering firm that had a small office in Brazil. Through that connection, Tetra Tech found CRA.

Investors seem comfortable with the acquisition, though it’s not clear if the deal’s announcement had any impact on Tetra Tech stock. Shares climbed slightly after the acquisition announcement May 2, the same day the company announced solid quarterly results. Shares hit a recent high of $27.20 on May 3, then fell to $26.44 on May 16.

Wittmann said investors like the move because Tetra Tech will be working with established multinationals. That should minimize the risks that can come with working in developing countries.

“Not all the markets in the developing world have western standards of doing business,” he said. “But contract law and all the normal things that are great about the Western economy pertain to Brazil when you work for international mining companies.”

Batrack said Tetra Tech will likely look to acquire more Brazilian firms, though the company does not have any specific goals. Future acquisitions might include Brazilian firms specializing in providing services for the oil and chemical industries.

Acquisitions are key for Tetra Tech and other U.S. firms that want to enter the Brazilian market because it is difficult to impossible for foreign firms to get work in Brazil without a local presence and local talent.

Sergio Monaro, managing director and head of project finance in Brazil for London’s global bank HSBC Holdings PLC, said about 90 percent of all engineering and construction work in Brazil is done by Brazilian firms.

“You’ve got well-established, big companies and the services they can provide are really outstanding,” Monaro said. “So it’s not a surprise that local companies would clinch most of the work.”

Even if a foreign firm can find work in Brazil, the country has rules that mandate the use of Brazilian workers, making it difficult to bring engineers or other staff into the country for big projects.

“What makes it different from some countries is that we really need to grow and add resources in the country,” Batrack said. “It’s not somewhere that we can export people or resources from the U.S. That will mandate that we grow, at least initially, through acquisition.”

Indeed, other companies are trying to do the same. Aecom, which has done work for oil companies operating in Brazil and was selected to design the master plan for Rio’s 2016 Olympic Village, has been looking to acquire one or more firms in Brazil since last year.

The next step is for Tetra Tech to uses its Brazilian presence to expand outside of the mining market. Batrack said he hopes to focus the company’s operations on specialty engineering for water, oil and chemical projects. He doesn’t plan to pursue contracts for massive transportation projects, power plants or other public infrastructure projects that will be built in the country in the coming years.

“Brazil has lots of providers of plain vanilla services, so you have to find a niche where you can add value,” Monaro said. “In oil and gas, I see a lot of possibilities for foreign firms who can bring expertise. But in regular sectors, like toll roads – don’t try to bring in someone who will do toll roads. That’s totally dominated by local firms.”