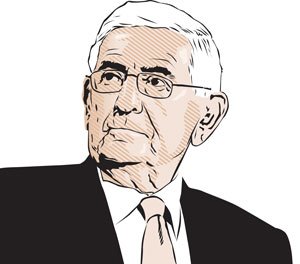 BUZZ: Savvy entrepreneur and arts patron finally got around to putting down on paper his secrets to success with “The Art of Being Unreasonable: Lessons in Unconventional Thinking.” Part memoir, part how-to book describes how asking right questions and setting seemingly unreasonable expectations enabled son of Lithuanian immigrants to build two Fortune 500 companies. Also tweets and blogs wit and wisdom.

Declared in a recent interview that the nation’s wealthy are largely coddled by federal tax code and ought to pay greater percentage of wealth in taxes. Among billionaires who signed the pledge formulated by Warren Buffett and Bill Gates to donate more than half their wealth to charity. Broad and wife, Edythe, actually expect to donate up to 75 percent to favorite causes.

Born in Bronx and raised in Detroit, started out as a certified public accountant. After making first fortune with Kaufman and Broad (now KB Home) in the 1960s, bought Sun Life Insurance Co. of America and transformed it into retirement savings giant SunAmerica. Sold to insurance giant AIG in 1998 for $18 billion in cash and stock. Stake decimated during credit crisis and recession.