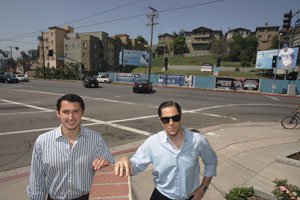 Evanisko, left, and Melaugh with property in background. Photo by Ringo Chiu.

When a Guggenheim Partners affiliate announced in March it would buy the Los Angeles Dodgers for $2.15 billion, it didn’t just provide the baseball team with a boost. The real estate around Dodger Stadium appears to be benefiting, too.

Since the announcement, at least a half-dozen properties in a one-mile radius of the stadium have sold, gone into escrow or been listed. That’s about double the rate of the previous year’s activity.

Brokers said interest in the area is increasing on the belief that the new owners intend to improve the stadium and beef up safety. What’s more, there’s the notion that an attraction will be built on the parking lots around the stadium.

“There’s no question that someone investing $2 billion here is going to enhance the value of the area – like Staples Center did to downtown,” said Frank Evanisko, president of Studio City land brokerage Evanisko Realty & Investment Inc. in.

Evanisko and his colleague David Melaugh last month brokered a $1.4 million sale of a vacant site less than one-fifth of a mile from the stadium to a South Korean developer who plans to build parking for ballgame visitors. The half-acre lot on Sunset Boulevard had been on the market nearly nine months but sold soon after the sale announcement.

In another example, several parcels being sold as a site for a 28-unit condo complex at 957-973 Figueroa Terrace had sat on the market for more than 80 days before going into escrow this month.

In addition, a multifamily property at 738 Bernard St. recently went into escrow after three months on the market.

In the previous year, several properties sat on the market for more than 190 days before they sold.

Of course, some of this interest may simply reflect increasing demand in Echo Park. Between gentrifying Silver Lake and resurgent downtown, the working-class Echo Park area where Dodger Stadium is located has not seen the level of investment or development as its neighbors. Before the real estate crash, developers, assuming Echo Park could become an up-and-coming neighborhood, were entitling sites there for mixed-use and townhome projects. Those projects went away when the market crashed.

But the news that the Dodgers have a new well-capitalized ownership in the financial services group that’s headquartered in Chicago and New York is a significant contributing factor to bringing them back. That and the belief something notable may get built on the now-empty stadium parking lots.

“It’s incredibly positive to have new ownership of Dodger Stadium, the chance to redevelop that land and the chance to make it more family-friendly,” said Lion Managing Director Jeff Weller. “It’s a little speculative in the sense that it hasn’t been built out, but it has all the elements of being a great rental market. The area still needs to be somewhat proven. So there’s still value there.”

Sports stadiums are known for having a positive effect on local real estate by increasing values and real estate activity nearby. UCLA Ziman Center for Real Estate lecturer Paul Habibi estimates that new stadiums can improve values by 20 percent to 30 percent.

While Dodger Stadium isn’t a new development, the new ownership is expected to make improvements to stadium infrastructure. Habibi estimates that an improved venue with some new development could increase values of nearby real estate by 10 percent to 15 percent.

“It will help revitalize that community and a lot of existing landowners are looking at this to be accretive to their land values,” he said.

The new ownership also is expected to improve safety. Gang members increasingly attend baseball games, according to the Los Angeles Police Department, and the area has been perceived as becoming dangerous, a sense that peaked after the brutal beating of San Francisco Giants fan Bryan Stow in the stadium parking lots last year.

But most notably, there’s a belief that former Dodgers owner Frank McCourt may revive plans to develop a large mixed-use project on the parking lots. Four years ago, he proposed a $500 million complex of shops, restaurants and a museum for the baseball team. He would build stacked parking to replace the lost spaces.

No new or updated development plans have been made public. The belief that the parking lots may be developed hinge largely on the facts that McCourt retained a 50 percent ownership in the lots and he now has plenty of money after the sale of the team.

Beyond that, the new ownership includes basketball legend Earvin “Magic” Johnson. He operates real estate investment fund Canyon-Johnson Urban Funds, which provides equity to development projects in diverse working-class neighborhoods – such as Echo Park. Johnson is Guggenheim’s point person on overseeing development at the stadium including the parking lots.

Even before the sale to Guggenheim, others saw the potential. Notable real estate developers, including Rick Caruso, made bids for the team and the stadium.

Nonetheless, the Eastside still has a way to go. What’s more, no development on Dodger Stadium land has been approved and there’s always risk involved in investing on hopes, Habibi said.

“There’s a good amount of question about whether (McCourt) gets entitlements and the market is a sensitive place,” he said. “The rise of the property values will follow in lockstep with the risk being removed.”

Because of that risk, prices in Echo Park still trend lower than neighboring Silver Lake and downtown.

But some developers believe the opportunity outweighs the risk.

“The Dodgers games had become somewhat dangerous and I felt like new ownership would bring back what (previous owners) the O’Malleys had, which is a safe, friendly environment,” said Lion’s Weller. “Over the next five years there’s going to be a ton of development in this area. If the parking lots get developed, that will bring in more residents. It’s very positive. We think it’s probably the best place to put your money right now.”

Lion owns property in Hollywood, Los Feliz and Silver Lake, but Weller said it is actively seeking to expand in the area around the stadium and Echo Park.

And some longtime landowners are looking to test the market. For example, the Barlow Respiratory Hospital, just west of the stadium, went on the market last month for the second time in six years. The operating hospital, at 2000 Stadium Way, is seeking approval to rezone the site to allow for more than 800 condos and more than 15,000 square feet of retail and is looking to sell to a developer.

Evanisko, who is not involved with the Barlow property, said he believes more properties will come on the market and seek prices they may not have been able to ask before.

“This news is giving them a chance to get the dollar amount they hoped for,” he said.