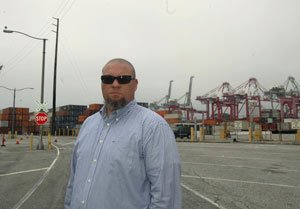 For years, importers whose cargo arrives at the ports of Los Angeles and Long Beach could go online and see if a shipment has arrived.

But importers could lose that ability if unionized port office clerks prevail in contract negotiations and make customers go through them to check the status of their shipments.

That may seem like a fairly small matter, except for this: A labor arbitrator last month ruled that longshore workers at the twin ports could join a strike, which means if the office clerks call for a strike over the issue, the port would effectively be shut down, stranding ships.

“(The union) seems to think the recent ruling gives them a hammer,” said Stephen Berry, negotiator for the Los Angeles-Long Beach Harbor Employers Association, the bargaining group representing shipping companies and terminal operators. “If they really are proceeding on that basis, it could lead to a total port shutdown and that would not be in the best interests of the region or the nation.”

Office clerks picketed four shipping terminals in December after negotiations broke down. The employers association and the union didn’t return to the bargaining table until two weeks ago, but the two sides have yet to agree on even the most basic terms of the negotiations.

At issue are not only the usual matters – wages, hours and lay-off policies – but also the type of technology that shipping companies, terminal operators and their customers can use. John Fageaux, president of the International Longshore and Warehouse Union’s Local 63 Office and Clerical Unit, which represents most office clerks at the local ports, said employers are using technology to get around the union.

“We’re not fighting technology,” Fageaux said. “But we’re not going to let it be used in a way that will let other people do our jobs.”

In some cases, though, those other people are the customers – importers, freight forwarders and customs brokers – who want 24-hour access to information about their shipments. If that information is blocked, local ports could find themselves at a disadvantage. That’s because they compete with other ports on the West Coast. And in two years they’ll be competing with East Coast ports when the expanded Panama Canal opens to larger cargo ships, said Joseph Magaddino, a logistics expert and chairman of the economics department at Cal State Long Beach.

“There are legitimate alternative ports,” Magaddino said. “If you can get better service out of other ports, that does hurt the competitiveness of L.A. and Long Beach. Over the long term, it’s a big issue.”

Local 63 of the Office and Clerical Unit, or OCU, has about 800 members. Unlike longshore workers, who can work at any of the port’s shipping terminals, OCU members work for particular companies, such as APM Terminals Inc., which operates a terminal at the Port of Los Angeles.

Though relatively few in number – for example, ILWU Local 13 represents 7,800 local longshore workers – OCU members play a crucial role in port traffic. They handle bills of lading and other paperwork for the millions of shipping containers that move through the ports each year.

Union leader Fageaux said that they are well-compensated for that work, earning an average hourly wage of $40.50 – that’s $84,240 per year – with a premium-free health plan, a pension and a guarantee that they won’t be laid off.

“Absolutely they are (well paid), and they provide a very good service for the employers,” he said. “They’re responsible for a lot of the great profits these employers enjoy.”

OCU members have contractual guarantees that they will be paid even if there’s no work. But Fageaux said he wants to prevent shipping companies and terminal operators from using nonunion workers to do what has traditionally been union work, or allow customers to do it themselves.

The union agreed to let their employers bring in new technology in 2004 and 2007 negotiations, but Fageaux said that agreement allowed clerks’ work to be done by computers, not other people. A system that scans shipping containers and loads information into a computer system automatically is OK, but a system that allows customers or nonunion workers to enter the same information is not.

“We agreed to let automation take the place of some of our work,” he said. “But now it’s not automation: It’s other people doing it.”

For example: At some companies, OCU clerks have traditionally been the ones who communicate with customers and Customs and Border Protection when the agency puts a hold on a shipping container, either because of something suspicious or simply because of missing information.

But in the latter case, shipping customers can now receive an automatic alert that there’s a hold on their container, provide the missing information and get the hold removed, saving hours or even days. The old process required clerks to call a customer, get the information and relay it back to Customs.

“Taking a hold off a container is something we’ve always done,” Fageaux said. “They want customers to do it themselves, but that’s an issue of jurisdiction we’ve bargained for over the years.”

The union also wants to roll back other technologies brought in over the past few years, such as programs that let customers track shipments online rather than having to call an office clerk for information. Fageaux also calls for a crackdown on employers doing OCU duties with other workers.

But the union is willing to make a deal with employers on technology and won’t necessarily demand the elimination of online customer tools.

“What we have proposed in the technology language, we’re open to discussion,” Fageaux said. “We’re not digging our heels in on that.”

But Berry, the employers association negotiator and a partner in the Costa Mesa office of law firm Paul Hastings LLP, said the union opposes new and existing technology. He said the union achieving its goals would amount to “very limited accessibility” for shipping customers, and would make Los Angeles and Long Beach the exceptions in a system that gives shippers more information about cargo.

Most freight forwarders and customs brokers contacted by the Business Journal declined to comment on this story because of the ongoing negotiations, but some acknowledged that they want as much information and access as possible.

“Technology at the ports is very important to increase efficiency,” said Daniel Meylor, a manager at L.A. customs brokerage Carmichael International Service. “Like with all businesses, you want people to be able to get online and get status reports.”

Los Angeles and Long Beach for decades have had a near monopoly on U.S. imports from Asia thanks to local ports’ location in the massive Southern California marketplace, expansive goods-movement infrastructure and the inability of large cargo vessels to navigate the Panama Canal.

But with a canal expansion scheduled for completion in 2014, cutting off online information in Los Angeles and Long Beach could make local ports less attractive to shippers and result in cargo traffic moving to Gulf Coast or East Coast ports, many of which have expansion and modernization efforts under way to attract vessels from Asia.

Kristen Monaco, an economics professor and director of the graduate program in logistics at Cal State Long Beach, said online tools save time and give shippers more predictability. If they can’t use those tools here, Southern California could lose out.

“If you keep making things increasingly noncompetitive and increasingly inconvenient, maybe people are going to be willing to go in through other ports,” Monaco said. “Even if it’s a couple hundred dollars more expensive to go through an East Coast port, if that port is able to give you more information, maybe it makes sense to pay the extra money.”

But a more immediate risk to local ports is the threat of a strike. When OCU members picketed shipping terminals in December, longshore workers honored the picket lines until a local labor arbitrator ruled other ILWU locals could not join in. But another arbitrator overturned that decision last month. That means if the office clerks picket again or go on strike, the longshore workers could join them, effectively shutting down the harbor.

Fageaux said he hopes it doesn’t come to that, but he didn’t rule out the possibility.

“The last thing OCU wants is a work stoppage,” he said. “But we’re not going to roll over.”