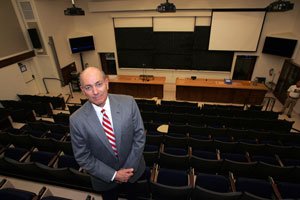 Modern aviation, digital camera sensors, molecular biology. These are only some of the scientific breakthroughs that emerged from the labs of the California Institute of Technology.

But for all the cutting-edge work performed at the Pasadena campus, there’s something not so high tech about it: namely, the aging, more than century-old campus.

Now, the university is in the midst of renovating several historic labs and buildings, and the project is posing a particular challenge to the architects, engineers and contractors hired to do the work.

Consider the lecture hall where physicist Richard Feynman taught. Not only are the walls fragile, but the chalkboard where the Nobel laureate scribbled equations had to be preserved.

“We call it surgical demolition,” said Dana Roberts, chief executive of Pasadena general contractor C.W. Driver Inc. “You have to be careful. It’s part of history.”

Founded in 1891, Caltech spans 124 acres southeast of downtown Pasadena. Many of its 135 buildings were built in the first half of the 20th century; some have been renovated over the years but many have not.

At least 10 buildings are in the midst of renovations, ranging from minor to significant. A total estimated cost for all the works was not available from Caltech. C.W. Driver subsidiary Driver SPG’s six projects total about $3 million.

The school has not spared expenses, though, in carrying out the projects. Big-name downtown architecture firms Gensler and AC Martin Partners Inc. have been hired, for example, to help design some of its new science labs and preserve historical elements.

Ken Hargreaves, the school’s senior director of design and construction, said Caltech didn’t want to make any mistakes while renovating the buildings.

“We want to maintain the feeling of what has been. We don’t do it willy-nilly,” said Hargreaves. “This place has a long memory and we hold many of those features dear. Those things are a part of the fabric of Caltech.”

The challenges presented by the 250-seat Richard P. Feynman Lecture Hall are typical. The structure was built in the 1920s and renamed for the physicist who died in 1988. It still had its original folding wooden chairs, flooring and lighting. It also had nearly no capacity for electrical systems that would allow video projection. Also, seats lacked nearby outlets for students with laptops.

Driver SPG began working on the lecture hall and five other spaces on the campus. In the lecture hall, the firm ripped up the floor and installed wiring for video projection and 60 outlets at the seats. The original wooden seats were torn out and replaced with the same number of cushioned folding chairs. Acoustic panels were added to the walls to soften the sound in the 2,300-square-foot hall. The ceiling also was reconstructed with newer materials and hanging lamps.

Throughout the renovation, workers were careful to avoid damaging the structure’s original clay-tile and plaster fragile walls. Perhaps most important was preserving the original chalkboard written on by Feynman. It also was rumored to have been used by Albert Einstein when he did research at Caltech.

The company built a sturdy plywood cover for the six-piece blackboard that has hung on the hall’s front wall for decades. The cover, created because the company was too nervous to risk damaging the blackboard by removing it, protected the blackboard during the renovation and was removed when work was completed.

The result? The $580,000 project has made the room look new while being faithful to its past.

“Some of the key things that made it the Feynman Lecture Hall – like the chalkboards and the size of the room and a lot of the original wood – they tried to stay true to history with that,” said Caltech spokesman Lawren Markle.

Gensler is designing a $1.5 million reconstruction of three neuroscience labs, all formerly used as biology labs. Construction began last month and should be completed this summer.

The room was formerly used by scientist Michael Dickinson and his research colleagues to study the biomechanics of flies. But now that the study has wrapped up, other students and professors need the space to conduct research on subjects such as nanoscale heat transfer, which may one day be used to provide more environmentally friendly air conditioning.

Architect Ken Lewis, president of AC Martin, said his firm worked closely with the researchers who will be using the space to determine how to redesign it. One tricky feature was building a “clean room” that will be sealed tight to reduce the amount of dust, which can hinder experiments.

“The nature of the science has changed so the building needs to adapt to that,” said Lewis. “We see it as a creative opportunity to find an interesting way to use something they want to keep and keep it authentic.”

Construction on that $575,000 project began last month and is expected to be completed by this summer. Assistant Professor Austin Minnich will conduct energy research there using lasers, optics and cryogenics.