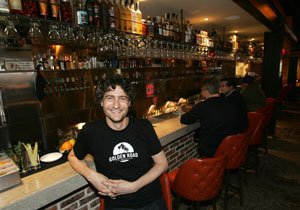 Only three years ago, Tony Yanow was running a quiet Internet consulting business out of his home trying to figure out what he really wanted to do with his life after being fired as chief executive of music video website Music.com. Today, he is one of the most influential figures in L.A.’s growing craft beer movement. He serves dozens of hand-selected beers from California breweries at his successful Burbank bar, Tony’s Darts Away, and the Echo Park restaurant Mohawk Bend, which opened last summer in a converted movie theater. In October, he opened an Atwater Village brewery, where he makes beers for his Golden Road label that are distributed to more than 200 bars and restaurants in the county, and in Whole Foods markets throughout Southern California. The Canadian native, who has lived in Los Angeles for 15 years, also helped found Los Angeles County’s first beer brewer’s guild and has an event group on the side that holds beer festivals. Yanow sat down with the Business Journal at Mohawk Bend to talk about the L.A. craft beer scene; why he wrote a manifesto about 16-ounce pints; and how, at 41, he’s managed to avoid an occupational hazard: a beer gut – all while raising infant twins.

Question: When did you first have a beer?

Answer: I don’t remember the first time I had a beer. There are certain beers that I remember the instance of those beers. The first time I ever drank real ale was in England, and it blew my mind and it seemed so foreign. The first few sips of it I didn’t really like and then, as the evening settled in, I fell in love with them. I’ve been a fanatic ever since. I was 17, I think. I was in England with my parents and snuck out.

Where else have you drank beer?

I’ve done some beer traveling in Japan, and most recently we did a tour through Italy and found all these factories that were making mind-blowing amazing beer. France, Holland and England: (My wife) and I have mostly done European trips. I spent some time in Australia trying craft beers. Wherever we go, we drink beer.

What’s your favorite place for beer?

San Francisco, Toronado (pub). No question about it. I modeled Tony’s Darts Away after the Toronado. A couple years ago, my wife took me for my birthday to San Francisco, and we spent the weekend at Toronado and just drank beer. We stayed at a hotel nearby, would go out for dinner and then come back and have another beer.