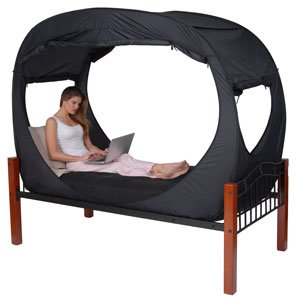 His USC roommate was so annoying that Eric Mear built a private space inside his dorm room.

“He would come back early in the morning after a long night of partying, really loud and obnoxious,” said Mear, who graduated last month. “He wouldn’t really care about waking me up. I thought: What can I do to change this situation? Then I thought about having some kind of tent over the bed.”

Mear started drawing designs and then decided to create the early prototype for his entrepreneurship class.

Faculty and friends thought it was a great idea. So Mear spun the idea into a business: Privacypop.com.

Mear’s invention pops up like a tent, wraps around a mattress and sits on top of a bed frame. Overhanging mesh flaps allow privacy for reading, watching television, or using a laptop or cell phone with some isolation from roommates. And it keeps out sunlight for those who like to sleep in. The fabric panels can be unzipped when privacy is not needed.

Twin-size models cost about $180 and queens about $300. They’re now sold only through the company’s website. Mattresses and bed frames aren’t included.

Privacypop launched earlier this year after Mear, 22, teamed up with Kevin Sperry and Danny Ninete, both 26. Sperry is the older brother of Mear’s girlfriend. Mear pitched the idea to him while on a family vacation.

“We were in Hawaii and he mentioned, ‘I have this idea. I really think it will work,’ ” Sperry remembered. “I said, ‘I think you’re on to something for finding privacy for college students, because that’s a niche market.’ ”

Sperry brought in Ninete; they had previously worked together at a mortgage company and they put up about $40,000 to get the company started. Sperry is the company’s chief executive and Ninete the chief operations officer. Mear is Privacypop’s president.

Sperry thinks the product has wide enough appeal for adoption beyond college dorms.

“The market really crosses into a lot of different people’s lives in situations people find themselves in, sharing a room with someone,” Sperry said, “summer camp, camping, military.”

Sperry also said he sees the Privacypop as a potential tool for relief for disaster recovery.

“Hopefully, (it’s) something families have for disasters as well,” Sperry said. “They might just want to have one in their closet, just in case.”

He hopes to sell the product through major retailers soon. They’re now in talks to get Privacypop into Brookstone’s online catalog.

The company won $5,000 from USC’s New Venture Competition last month. Mear said the company will use the money to buy inventory.

The tents are manufactured in China and the three-person company is headquartered in Century City. Mear wouldn’t say how many units the company has sold, but said the company has had orders from Brazil and Europe through blog traffic.

Last month, he and one of his bed tents were featured on the daytime talk show “Doctors” for a program about the merits of taking daytime naps. Mear said the appearance gave his product validation, but didn’t do much to bump up sales.

Colin Hunter, owner of Ontario mattress company Berkeley Ergonomics, said that Privacypop is too specialized to be a big seller.

“It’s a novelty item,” Hunter said. “It looks to me that this sort of configuration is not in high demand unless the demand is created.”

Hunter also questioned the comfort of the product. In a regular bed, tall people can stretch their legs off the side of a mattress, but they can’t do that with Privacypop’s flaps closed.

Bill Jahn, owner and president of Seahawk Designs Inc, a Riverside furniture manufacturer specializing in products for the bedding industry, believes it could be more than a novelty. And he thinks demand is there.

“It seems like something that has a lot of uses,” Jahn said. “I think younger people would want it.”

Albert Napoli, an adjunct professor at USC who helped Mear develop the product, said the Privacypop isn’t for everyone, but still thinks there’s a big market for it.

“It serves a very specific niche and that’s college students,” Napoli said. “It gives you your own space.”