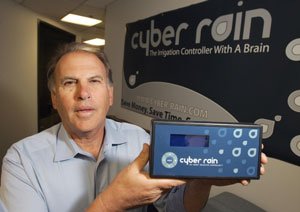 It takes a lot of water to keep Los Angeles County’s chaparral green.

Landscape watering accounts for as much as 60 percent of household water use, and a lot of it winds up as runoff.

As a result, an Encino company has been trying to help people save water.

And it’s just won a stamp of approval from the U.S. Environmental Protection Agency. Plus, a new state law mandates water saving. So Cyber Rain believes it is poised to build its client base.

The five-year-old company claims its can shave up to 40 percent off water bills. Cyber Rain produces a device, called a controller, that prevents overwatering by shutting off sprinkler systems on rainy days and adjusting watering schedules according to online weather forecasts and historical weather data stored in a computer program. The controller can be installed on site and plugs into an irrigation system’s existing timer wires.

It’s part of a trend called “smart irrigation” and is available for both residential and commercial buildings.

“It adjusts water level based on the actual weather,” said James Krug, the company’s chief executive.

Cyber Rain clients can also use their home computers to customize soil, terrain, plant and other property data and wirelessly send that info to the controller.

Cyber Rain last month became the first company to receive the EPA’s “WaterSense” certification, which makes it eligible to bid for federal contracts. Thanks to the certification – and a California law requiring local ordinances limiting landscape water use – the company is preparing to expand.

Krug believes both the law and the certification will help build the company.

“We think it’s going to be a huge (sales) driver,” Krug said. “The company is moving rapidly toward breaking even and we’re very confident what the future holds.”

Krug hopes to expand from 13 employees to about 40 by 2014. He said the company had record sales in March and April, and he predicts revenue of more than $2 million this year, although he did not say how much of an increase that would be.

A controller for a large estate costs about $400. A complex such as Park La Brea has about 50 controllers costing about $1,000 each. School districts usually need about five per campus of about $1,000 each. Cyber Rain does not charge for monthly weather updates or maintenance fees.

The installation process is easy enough for people to do on their own, said Krug, who installed his own home controller. Commercial buildings usually use building maintenance staff to put in controllers.

In response to an e-mail from the Business Journal, an EPA spokeswoman wrote that Cyber Rain was granted the certification “for technologies and practices that result in more efficient use of water.”

“Water is energy and we waste it like crazy on lawns,” Dembo said. “Something like this is going to save an amazing amount on water.”

But he said that with limited new construction, Cyber Rain may not benefit from the state requirements for water management as much as the company hopes. The problem is that the new law addresses new construction, not existing or so-called “legacy” buildings.

“The amount of new construction to old construction is a small percentage,” Dembo said. “The real issue we should be tackling is the legacy. If you want to make real inroads into water conservancy, tackle the legacy.”

Gwen Huff, a land and water use scientist at the State Water Resources Control Board, agreed.

“The ordinance is somewhat limited now because it applied in large part to new construction,” said Huff, who was part of the team that rewrote a draft of the smart irrigation law. “There’s little new construction now.”

“Dumb controllers will go the way of the horse and buggy,” he said, “and the entire market will shift to smart controllers.”