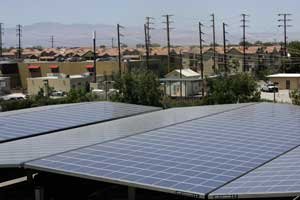 At every opportunity, Lancaster Mayor R. Rex Parris likes to say his high-desert city is one of the most business-friendly locales in Los Angeles County.

But under his leadership, Lancaster has become more than friendly to business. It’s become, well, a business.

Over the past two years, the city has established a public utility that is financing solar power installations in the area – earning profits in the process. And a separate joint-powers authority has partnered with a developer to seek approvals for a power transmission line, a project that could open the Mojave Desert to solar power plants producing thousands of megawatts of electricity.

If that sounds more Far East than Wild West, it’s because Parris said he got the idea for such public-private ventures on a trade mission to China.

“That’s when I first started thinking about greater government involvement in what were traditionally free enterprises,” said Parris, a personal injury attorney. “I realized, when the government owns a part of the business, you don’t fail. If there’s anything the government can do to make you succeed, it will.”

The city is already selling solar power to two local school districts under deals expected to earn the city about $1.5 million this year. And yet more revenue could come if the city is successful in helping Critical Path Transmission LLC of Chatsworth build transmission lines near Edwards Air Force Base. The city utility would be paid to operate and maintain the lines.

Even without the city’s involvement, Lancaster was attracting solar developers. Burbank firm eSolar Inc. opened a solar thermal power plant in 2009 and Pasadena’s First Solar is building a larger plant just outside of the city limits.

But city leaders said the power authority will let them do more to boost solar development, thereby creating jobs and growing the local economy. Parris wants Lancaster to become the alternative energy capital of the world.

He also hopes to bring in more revenue to make the city less dependent on sales and property taxes, both of which have plummeted over the past few years. It’s a strategy the mayor said has received no real push back, even in traditionally conservative Lancaster, though free-market advocates see it as a brazen example of public interference in what should be the private sector.

“The whole solar and green energy thing is in vogue right now and you see a lot of government involvement, but that doesn’t make it a good idea,” Summer said. “At the federal level, they haven’t been too successful with that.”

So far, only one, the Lancaster Power Authority, is generating revenue for the city. Last year, the utility contracted with SolarCity, a San Mateo company chaired by L.A. billionaire Elon Musk, to install solar parking shades at 25 schools in the Lancaster and Eastside Union school districts, both in Lancaster.

Typically, SolarCity would install a system and then charge customers for power over the next 25 years to pay off the initial investment. But in this case, the utility paid SolarCity $27 million up front, raised through tax-free municipal bonds. The schools pay the utility for their electricity.

“The city is making a little bit of money on it for raising the capital and the district is saving money on their power bills,” Cahill said. “They can raise capital at a lower cost than SolarCity. I would say the (interest rate) would be on the order of twice as much if it were privately financed.”

Cahill said SolarCity’s profit on the up-front payment is less than what the company would have made from 25 years of energy sales to the schools. But the deals are still a win for the company, because the school districts likely wouldn’t have installed solar systems without the city’s involvement.

Jason Caudle, Lancaster’s assistant city manager, said after making bond payments, the school district deals should bring in as much as $1.5 million a year in revenue for the next five years and $800,000 in later years after a state benefit to encourage the development of solar power expires.

The utility still has to cover costs, including billing and some minor maintenance, but has enough left over – profit, essentially – to keep paying city staff who otherwise would have been let go.

“We had employees over in redevelopment that would have lost their jobs and have been able to retain them,” said city spokesman Joe Cabral.

Kevin Davis, a managing director of Critical Path, said the lines would open northern Los Angeles County and southeastern Kern County to solar development and could add as many as 2,000 megawatts of power to the state power grid. That’s enough to power about 1.5 million homes.

Critical Path is still seeking financing for the lines and hopes to get the project written into a statewide power transmission plan managed by the California Independent System Operator, which runs the state’s power grid. Getting the project into that plan is key, as it would allow Critical Path and its private investors to be paid back for the cost of the project by rate payers across the state.

To help get that approval, Critical Path partnered with the High Desert Power Authority, a joint-powers authority created by Lancaster and Pittsburg, a Bay Area city that has worked on power transmission projects. That agency, not Critical Path, is asking Cal ISO for approval – the idea being that a public agency run by cities will have better luck in getting approval than a company.

“They bring a great deal of credibility,” Davis said. “They can help us navigate the regulatory environment.”

In exchange, if the transmission lines are built, the power authority would be paid to operate and maintain them.

Davis is hoping for approval next year and for construction to start in 2014.

City officials acknowledge they’ve taken on risk by getting involved in such projects, though they also said the deals are structured in ways that should protect the city.

For example, SolarCity essentially is an installer. So if it were to go bankrupt, the city would still own the school solar systems and could rely on manufacturer warranties to guarantee the systems continue to produce electricity.

But there are broader risks that have little to do with the particulars of these deals, said Bob Stern, president of the Center for Governmental Studies in West Los Angeles.

“Clearly solar is a risky business. Things turn around so quickly, costs come down, the Chinese undercut the panel market,” Stern said. “Should governments be taking that risk?”

In addition, the Reason Foundation’s Summer said the city shouldn’t be using its ability to issue low-interest, tax-free bonds to essentially compete in private markets.

“It just sets up unfair competition between the public sector and the private sector. The government is not a venture capitalist,” he said.

But Parris said the city needs more money and doesn’t have many options. The city’s general fund revenue dropped 23 percent over the past few years, from a peak of $68.2 million in 2007-08 to $52.6 million in the fiscal year ended June 30.

Indeed, the mayor said he wants to continue to bring more revenue to the city.

“When you’re faced with economic collapse, it’s damn the torpedoes, full speed ahead,” Parris said. “Before too long, I think it’s going to be a significant amount of the economic base for the funding of the city.”