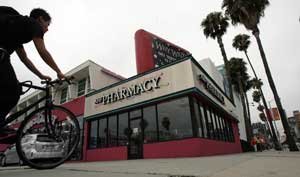 In recent years, the AIDS Healthcare Foundation’s aggressive fundraising and advocacy tactics have led it to tangle with rival AIDS organizations, corporations and government agencies.

Now, the combative Hollywood non-profit is taking on Los Angeles County officials after being passed over for a $75 million contract.

The county Board of Supervisors awarded a $75 million no-bid contract to Oakland’s Ramsell Corp. earlier this year, tasking the company with the administration of a new pharmacy network for HIV and AIDS patients. The program is a transitional one meant to prepare the county for switching patients to a new plan under national health care reform.

AHF said it would have wanted the contract, but county officials never solicited bids. The foundation has launched a legal battle to void the contract, claiming the no-bid process was improper. It’s also lost out on or had slashed two other recent contracts with the county.

For their part, county officials denied that AHF’s advocacy was a factor in contract decisions and said the no-bid process was needed to quickly implement a program in anticipation of health care reform.

The largest AIDS health care provider in the country, the AIDS Healthcare Foundation is active in more than 20 countries. In the county, it has seven clinics, six pharmacies and 13 Out of the Closet thrift stores.

But AHF also has become known for its aggressive tactics under the leadership of founder Weinstein, who has proved unafraid to pick fights in his efforts to expand the organization.

In 2010, AHF started an AIDS fundraising event, the California AIDS Walk, and scheduled it mere weeks before the long-established AIDS Walk Los Angeles, setting off a legal fight with AIDS Walk L.A. organizers. In 2006, it similarly drew the ire of AIDS Walk Miami organizers after launching a Florida AIDS Walk in nearby Fort Lauderdale, which has rapidly overtaken the AIDS Walk Miami in fundraising.

The biggest generators of revenue are its pharmacy and health care programs, in which it has agreements with governments and insurers to provide medical services and drugs to HIV and AIDS patients. Grants and contributions accounted for less than one-tenth of annual revenues last year.

The $75 million contract at issue is part of the county’s preparations for federal health care reform. Currently, thousands of HIV and AIDS patients in the county are cared for under a federal program called the Ryan White Care Act. Many of those patients are set to move to Medicaid rolls in 2014.

In anticipation of this switch, the county is moving about 5,000 patients into a transitional program called Healthy Way L.A. that started July 1. It has hired Ramsell to oversee a network of area pharmacies that will provide drugs to patients. Ramsell oversees a similar program in Oregon.

But AHF argues it should have had a chance to bid and filed a lawsuit in Los Angeles Superior Court. Last month, a judge ruled in its favor and canceled the contract, saying the county should have opened it up to competitive bidding.

County officials responded by reauthorizing a month-to-month contract with Ramsell. They also agreed to put the contract out for bid again by next year. AHF tried but failed to stop the county from approving the monthly contract with another lawsuit. Now, it is challenging the new contract as well through the continued legal proceedings.

“We want to have the opportunity to bid on it,” Weinstein said. “We think that sole source is abused routinely. Basically, the county feels it can do whatever it wants when it wishes to.”

AHF said it has been on the losing end of other contract decisions from the county. It bid on a roughly $3.5 million contract to coordinate eligibility screening and other administration services for AIDS and HIV patients, but the county pulled the contract last year without awarding it.

Mario Perez, director of the county’s division of HIV and sexually transmitted diseases programs, said the county canceled the contract due to upcoming changes in health care reform, which will complicate eligibility requirements.

The county also notified AHF in May that a contract worth about $7 million a year for outpatient care for AIDS and HIV patients was being switched over from a model in which the organization receives a fixed payment to provide care to one in which it receives fees for services. Perez said the move will ensure different county contractors receive equitable payments for the same services, while AHF claims the changes could cut the contract’s value in half.

“I think those allegations are completely unfounded,” Perez said. “AHF’s a partner of ours and we continue to conduct business with them.”

Ramsell’s contract started July 1, but AHF is still fighting to void it. A hearing is scheduled in November. Even if the organization doesn’t win in court, the interim contract will be opened up for bidding in the next year.

“AHF will be welcome to enter a competitive process with Ramsell and any other contractor,” said Sylvia Drew Ivie, a senior deputy for Ridley-Thomas.

Still, there could be more at stake than just one contract, said Michelle Sherman, an HIV-AIDS pharmacy consultant in Dana Point. When the transitional program ends and some AIDS patients are switched over to Medicaid in 2014, the county will likely be looking for an administrator.

“You’ll need someone to administer that program and L.A. County could very well choose Ramsell as well,” she said. “It’s very likely AHF will be interested.”