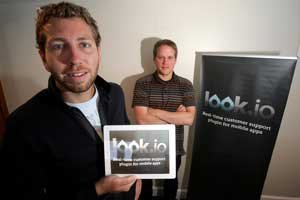 From left, Miller and Campbell at LP Mobile in Venice. Photo by Ringo Chiu.

Ethan Alexander read about a startup in Venice that did tech support for mobile applications on a blog. He helped his company purchase the startup last month, even though it’s never made a dime.

Alexander, head of the mobile division of New York customer service provider LivePerson Inc., was looking for a way to transition to mobile after specializing in serving businesses online. The startup, LP Mobile, is now part of LivePerson, which bought the company for an undisclosed sum.

Thanks to LP Mobile’s technology, LivePerson can give customer service reps the ability to see people’s mobile screens and help them in real time.

And thanks to LivePerson’s sales and marketing, maybe LP Mobile – until the sale known as Look.IO – will be able to make some money.

The company was giving away the service to its first clients in order to make sure it was working correctly. But there was another issue, too.

LP Mobile’s five-person team will stay in Venice. LivePerson plans to spend the next few months integrating the mobile functions into its operations, which include serving 9,000 clients such as Microsoft Corp. and Verizon Wireless. LP Mobile, which is working out of offices at startup accelerator Amplify.LA, is looking for new office space.

Alexander said LivePerson will offer pricing based on client needs.

LP Mobile had previously contracted with a handful of local online businesses, giving away its product for free to last-minute hotel booking site Hoteltonight.com and TestMax Inc., an LSAT prep application.

Alexander said he wasn’t concerned that Miller’s company didn’t have paying customers. In fact, it made the purchase even more attractive.

“There’s a little less baggage to deal with,” he said.

Miller’s happy that LivePerson will be bringing LP Mobile to its first paying customers.

Here’s how LP Mobile works: A buyer of a mobile app encounters a glitch. The person hits a button in the app and is connected to LP Mobile’s customer service. The representative then guides the customer through the glitch via on-screen texts. The reps can show the customer where to move on the screen. They can even move the cursor, but cannot click themselves or see anything onscreen besides the app. That’s out of concern for privacy, and also due to Apple regulations.

“There was really no good way for customers to connect with the company they were working with over mobile, except a phone call,” Miller said.

The company was co-founded by Miller, Marc Campbell and Joe Toscano, who had worked in startups and mobile development. They used their own money to get started and rented office space in Santa Monica.

Campbell, the architect behind product design, said the trio saw that customer service for mobile apps was an area they could explore.

“We tried to find a way to make it easier to get that feedback and see what’s going on in the device,” Campbell said.

The company took first place at the L.A. Startup Weekend competition last summer. The event brought it to the attention of investors and local accelerators. The company received $200,000 in funding from a half-dozen angel investors and in December became startup accelerator Amplify.LA’s first tenant.

Jeff Solomon, managing partner at Amplify.LA, said the company’s mobile innovations initially made it attractive to the accelerator.

“There’s no question that there’s going to be more transactions on mobile,” Solomon said.

Those innovations made the company attractive to LivePerson as well, he said. Instead of having to develop technology from scratch, LivePerson has now filled in that gap. He sees the integration of the two companies as a great fit.

“A lot of times companies buy companies and they’re not sure how they can integrate,” he said.

Josh Hartwell, chief executive at Santa Monica mobile game company Mobile Deluxe, predicts that LP Mobile’s service will inspire copycats, so the company will have to stake out its territory quickly.

“Right now I think they have a head start over their competitors,” Hartwell said. “It’s imperative for them as a new entity to define those new innovations.”

Sina Mobasser, co-founder of Santa Monica’s TestMax, has used LP Mobile’s service for the past year. He said it has helped convince customers to purchase his company’s $1,000 LSAT app. Even though he’s been getting the service for free, he’s ready to become a paying customer now.

“We would easily pay for it,” Mobasser said. “This is the first product of its type to offer live support in an app. Users have never seen anything like it.”