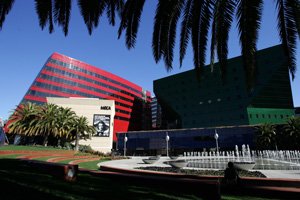 When developer Charles Cohen opens the doors to his 400,000-square-foot Red Building at the Pacific Design Center in April, his office may be the only occupant.

Nearly a year after the topping-out ceremony for what will be the largest speculative Class A office building to open in Los Angeles County since 2009, the West Hollywood building has not been able to attract the large high-profile media and entertainment companies that Cohen has been holding out for.

“His thought that a major company could come there is viable, but the problem is two-fold: There isn’t a tenant in the market for him, and his rent is probably in general a $1 or $1.50 over the highest rents paid today,” said Michael Ross, senior vice president of investment properties at Grubb & Ellis Co.

There is no doubt Cohen, who bought the Pacific Design Center in 1999, is facing a challenge.

When he started six years ago on the $165 million project, the third and final piece of the complex at San Vicente and Melrose boulevards, it wasn’t unrealistic to think that a large talent agency or production company would take at least 200,000 square feet at $5 a square foot. But today, that seems much less attainable and the building may sit vacant except for Cohen’s 10,000-square-foot office for much longer than he had anticipated.

Companies such as United Talent Agency Inc. and William Morris Endeavor Entertainment LLC toured the property but decided to move into lower-price properties in nearby Beverly Hills. Brokers in the submarket say they aren’t aware of other large local tenants looking for new offices.

Cohen, however, has been nothing if not persistent. Instead of dropping the asking rate or searching for another type of tenant, he is now on his third brokerage in two years – L.A. Realty Partners – after the first two failed to deliver.

However, L.A. Realty brokers told a trade group at the Four Seasons Hotel on Jan. 25 that it is open to offering leases as small as 20,000 square feet for a desirable company. It also is willing to make deals with a tenant to occupy combined space in both the Red Building and the Green Building next door that has asking rents of about $3.50 a square foot. The Green Building houses furnishing showrooms, designers, artists and other design-related companies similar to the third structure in the complex, the Blue Building.

Jonathan Larsen, executive managing director at Transwestern in downtown Los Angeles, said that L.A. Realty may have more luck leasing up the building when it officially opens April 1.

“When you build a premier project in a tough landlord market that’s coming back, a lot of times you may not get tenants until it’s built and open for people to look at it, walk in it and feel it,” Larsen said.

Indeed, Cohen has spent a large amount of time and energy on the details of the building, which was designed by renowned architect Cesar Pelli and under construction for three years.

Consider the red “frit” glass that covers the building and is transparent to tenants but opaque to passersby. The panels were engineered in Minnesota, manufactured in China, sent to Thailand for aluminum framing and then shipped to West Hollywood for installation.

In fact, brokers believe that Cohen, who has a 10 million-square-foot portfolio that includes design centers in New York and Miami, has made such a commitment to the project – he even bought a condo nearby – that he is likely to absorb near-term losses in hopes of landing the right tenant.

“He’s got a ton of money and he’ll feed that animal because he thinks sooner or later someone will come along at the numbers he’s talking about,” Ross said.