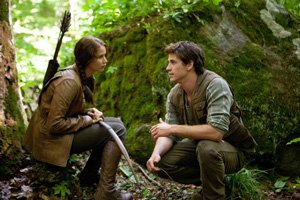 A scene from ‘Hunger Games,’ which Lions Gate will release in March. Photo by Courtesy Photo

Though analysts cheered news that film and television company Lions Gate Entertainment Corp. was on the verge of acquiring rival studio Summit Entertainment LLC, investors appeared last week to be waiting for more details before jumping in.

Shares of the Santa Monica studio did hit a 52-week high on slight gains, but overall were up only about 3 percent in the four trading days since reports broke about the imminent merger. Shares closed at $8.71 on Jan. 12 after a week during which trading volume on the New York Stock Exchange dipped well below its three-month average.

The deal could be a coup for Lions Gate, but investors were waiting to see the terms of any deal, as well as for more financial information about Summit, which is privately held. As of the end of the business day on Jan. 12, a deal had yet to be announced.

“I think that without having the actual terms, a lot of people said to themselves, ‘Why not take some profit now? And if it really looks like something I’ll be in again, I can always come back in later,’” said Marla Backer, an analyst at Hudson Square Research in New York. “People are going to be looking to see how much cash Lions Gate is going to pay, how much they’ll pay up front, what the ownership structure will be and if they take on any of Summit’s debt.”

“But the reason you haven’t seen the stock move more is because there have been previous rumors about a deal for some time, and there’s still uncertainty about what the pricing’s going to be,” he said. “The stock could trade up or down depending on the pricing and Summit’s financial information.”

Lions Gate did not respond to a request for comment.

Most analysts say the two studios are a good fit. Lions Gate has scored some television success with shows such as “Mad Men” and “Weeds,” but its film division needs a hit, especially following the recent disappointing box office returns of “Warrior” and the “Conan the Barbarian” remake.

However, that could change with the release in March of “Hunger Games,” a film based on a bestselling book series for teens that the studio is hoping to turn into its own “Twilight”-like franchise. A second film is scheduled for release late next year.

But pressure is high for the studio to deliver. In fact, its high valuation – it trades at a multiple of its earnings that is much higher than competitors – is based mostly on expectations for the new franchise.

By acquiring Summit, Lions Gate would be getting a team that’s proven it can market a franchise to teenagers with “Twilight,” which similarly was adapted from a series of young adult novels. And any deal would give Lions Gate the rights to the “Twilight” franchise, of which there is one more film to be released in November, as well as a small film library that includes “The Hurt Locker” and “R.E.D.”

Analysts have mostly hailed a potential deal. A report released by Stifel Nicolaus & Co. said it would be positive for Lions Gate, saying it would increase the company’s cash flow and somewhat minimize the risk around “Hunger Games.”

But some, including Miller, have their doubts. He said Lions Gate was overleveraged and should have bought Summit earlier, before the Twilight franchise came to an end.

“I find it ironic that Lions Gate is in the market to acquire anything at all,” he said.

Indeed, a deal would be another twist on an up-and-down 12 months for the company. In August, billionaire investor Carl Icahn dropped his long-running fight to take control of Lions Gate and announced he would sell all his shares and end litigation against the studio. Since then, shares have risen and are now 29 percent higher than January of last year.