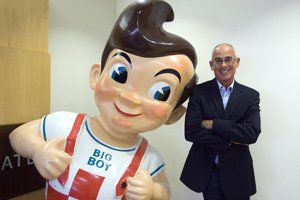 A little ice cream has gone a long way for Bob Champion. The veteran developer began his career as a franchisee of Swensen Ice Cream shops, drawing on that experience to ultimately establish his own company: Champion Real Estate Co. Champion is building two mixed-use apartment complexes under Hollywood’s controversial new density plan, which allows high-rises near mass transit. Along the way, he has participated in virtually all of the major trends in California real estate development, including building hundreds of minimalls during the 1980s, not something he is exactly proud of. Later, he went on to build vertical retail and mixed-use residential projects. Like most developers, he was hit hard during the last real estate bust, which left him wondering if he’d be “pushing a shopping cart.” Champion, 57, sat down with the Business Journal to discuss his current projects; career; and personal life, in which ice cream also played a big role. He first met his wife, Margie, when she applied for a job at one of his companies. She turned down the job after deciding Champion was one of the most “despicable” men she had ever met. Years later, he proposed to her over a hot fudge sundae; the couple has been married 26 years.

Question: It’s hard not to notice the Bob’s Big Boy figure in your lobby. Where’d that come from?

Answer: Marriott (International Inc.) owned a number of Bob’s Big Boys, which I bought and redeveloped into retail properties. When we closed escrow on one Bob’s, which was the second or third oldest in Glendale, the Bob (figure) was still there. I asked them if I could have it and they said yes.

Did you want it because it’s named Bob, too?

Maybe a little. But it’s an icon and I look at it as a form of art. It’s also sentimental. When I was a kid I went to Bob’s all the time, and 40 years later there aren’t very many anymore.

Any interesting reactions to it?

Well, the Bob looks outward from the inside wall to the window, and that’s where the reception desk is. One day the receptionist came in and gave notice. I asked her why because I wanted to address her concerns and she said, “I’m creeped out by Bob! If you sit at the reception desk, he stares at you.” I said, “I don’t want to get rid of Bob.” She said, “If Bob stays, I go.” So she left.

Is that why you don’t have a receptionist anymore?

No receptionist ever again. We have buttons on our door now. (Laughs.)

Let’s talk about Hollywood, where you are now developing. It’s undergone a tremendous renaissance.

Hollywood has the public transportation and tremendous amenities from residences to nightclubs and hiking in the canyons. It’s perfectly situated between the San Fernando Valley, downtown and West L.A., and I like the new update of the community plan where they’re calling for density along major boulevards.

Some critics think it will change the area’s character.

This nodal development concept where you do high-intensity development around transportation has been done successfully around the country. There’s no reason it can’t be done here. The only thing is the scale that we have to do here because we are so large.

When will you start on these projects?

We are about a half-year away from entitling our first (an $80 million, 250-unit residential and retail complex on Highland and Selma avenues) and a year from our second (a $50 million, 220-unit residential-retail project off Hollywood Boulevard behind Musso & Frank Grill).

That’s pretty impressive stuff. How did you get your start in development?

I went to USC for a year and was bored out of my mind and decided I wanted to go into a business. So I bought a Swensen Ice Cream franchise.

How does a college kid afford a franchise like that?

An 18-year-old boy doesn’t. What happened is my brother and I bought it as partners. We each had a little savings and our father guaranteed the business loan we got. It wasn’t a lot.

I did like ice cream. I’m a skinny, 170-pound guy (now), but I was 210 back in those days. I ate a lot of ice cream. My favorite was fresh banana malt with hot fudge. But you are giving me too much credit. I went to different business opportunity conventions and wanted to do something high quality that I thought people would like. I did not bring business acumen to that decision.

So how’d that go?

I realized very quickly that was a business I was going to get bored at as well. So I went to work for the franchising company at Swensen in San Francisco for a year. When I was 21, I put an investment group together and bought the rights for future development of Swensens in Southern California. At our peak, I had something like 300 employees and 25 stores, and was making no money.

Dairy products are a fluctuating commodity on a daily basis. I was selling a $1.25 ice-cream cone and making a profit. Well, if the price of dairy mix doubles, I can’t change the price for my customers.

So how does this lead to real estate.

In 1980, I happened to be dating a gal and her father and I hit it off and he offered me a job in real estate at La Mancha Development; they were the king of minimalls. My fourth year they made me CEO and partner at age 27. We built a little over 300 of those minimalls in California.

I met a different gal, got engaged and one afternoon I was driving her around and showing her the different things I was building. She said, “Is this the legacy you want to leave for our kids?” That got me thinking for the first time that there was more to real estate development than this.

At that point, I understand, you started Champion Real Estate. What did you do?

I immediately entered into a joint venture with Long Beach Bank. We did about 40 shopping centers in blighted areas up and down the coast with redevelopment agencies from about 1987 until 1992. Then we had a terrible recession and liquidated our portfolio.

So you needed to start from scratch again?

I was married with four kids by then with a big mortgage, no money and trying to figure out what I should do. So I decided to go back to school and USC was kind enough to overlook the fact I never finished my undergrad degree. But I entered their real estate master’s program at night from ’92 to ’95. It was the best experience of my life.

It was like leading a horse to water. All these years I’d been doing it, but to discover there was research and academia about what I did for a living was terrific. I started teaching there and developing again in 1995.

Is that what led to your mixed-use developments?

In 1998, USC asked me if I would consider teaching a mixed-use class and I said, “OK, what’s mixed use?” So I went back out on the road to see where mixed use was viable and came back convinced that mixed use was a viable option for Southern California in key urban areas.

How did it go for you during the real estate bust?

There were several years I wondered if I’d be pushing a shopping cart but I avoided that. The only mistake I made is I should have stopped in 2004 because then I would have delivered all my product in 2007 and I would have skated through this whole thing. But I didn’t. I teed up three or four projects in 2005, which I delivered in 2008 and I got hammered just like everybody else who was doing business in those times.

So how’d you weather it?

I spent pretty much all of ’08 to ’10 dealing with those problems. The only good news was that I acted very early on them. I went right to our lenders; they worked with our company and we retained ownership, didn’t have any foreclosures and worked it out.

I understand one of your sons, Parker, works for you. What’s it like to have a child follow you in real estate?

I love every second. I was a little apprehensive about it at first because I know I have a forceful will, but I want my kids to do what they want to do. It took several years for Parker to convince me he’s passionate about our business, with nothing to do with my not-so-hidden preference he join me.

No. He has traits that complement my shortcomings. I’m not a great organization person; I’m a creative thinker. I like to make deals and solve problems. I’d be happy to sit at a desk and do it all myself but that’s not how it works. My son is great at interacting with people and organization.

By the way, how’d you meet your wife?

I interviewed her for a job for a real estate company. I was going to hire her to do leasing and she fled the interview saying I was the most despicable man she’d ever met.

I guess because I was a very demanding boss and I had my ideas of the kind of commitment I was wanting from employees. She had a vacation planned and I told her if she wanted the vacation, she couldn’t have the job.

Are you still that demanding?

I think I’m very different than I was in those days. Today, my employees get a couple weeks of vacation and 10 days sick days. It’s a very different world.

How’d you two end up together then?

I didn’t hire her, but we knew mutual friends and bumped into each other over a five-year period. One day at a restaurant, we were both there and got along. So we went out on our first date and I asked her to marry me.

That was quick. What’s that story?

It’s another ice-cream story. Unbeknownst to me, my wife and her father loved to go to Hollywood on the weekends to browse old bookstores and go to movies. One of the things she always wanted was to go to ice-cream store C.C. Brown’s, but her father would always take her on Sundays, when it was closed. So on our first date, I took her to a movie in Hollywood and then took her to C.C. Brown’s.

Sounds like you knew how to win her heart. How did she win yours?

She was ecstatic over the ice cream. I realized she was the gal for me.

So what’d she say?

She said no then – she was divorced and had two girls. But four months later (I proposed again). We got married a few months later.

MOST INFLUENTIAL PEOPLE: His wife.

PERSONAL: Lives with his wife, Margie, and dog, Sydney, and cat, Marvin, in Santa Monica. Has four children, including two from wife’s previous marriage, and three grandchildren.