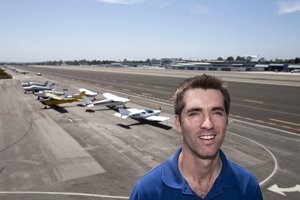 One of the hottest startups to recently break out of L.A.’s soaring Westside tech scene isn’t even a technology company.

Instead, it’s a new airline dreamed up by Wade and David Eyerly, brothers without any business backgrounds. Yet, it has the tech community buzzing, venture dollars flying in and the potential to connect California’s two tech epicenters.

The plan: offer “unlimited” flights for an affordable monthly fee, and take off from smaller airfields without the long lines and hassles of large airports.

The name: Surf Air, evocative of its Santa Monica base.

A single Surf Air plane has yet to fly, but the brothers already have raised $4 million in venture funding, which the company recently used to purchase three eight-seat Pilatus jets. Already some 2,400 people are said to have signed up for the service, including big names in Hollywood and tech, such as Internet entrepreneur Paige Craig and actor Jared Leto, both of whom also are investors.

“An airline like ours changes what ‘local’ means to you,” boasted Wade Eyerly, 33, chief executive of Surf Air. “With us, a regular businessman can easily fly back and forth in a day. That’s just something (he) couldn’t easily do before.”

Surf Air expects one of its first routes will ferry passengers between Los Angeles and Palo Alto, capturing a growing number of tech and media workers who shuttle between the areas.

In the last year or so, Google Inc. of Mountain View expanded to 100,000 square feet in Venice, and its YouTube subsidiary, based in San Bruno, opened offices in Beverly Hills and Playa Vista, where Facebook Inc. also opened a larger office.

But the startup still has lots of runway to travel before takeoff.

It not only has to secure a local airport to be its hub, but Surf Air has been in a protracted process with the Federal Aviation Administration to get approval to start operations. That has pushed back the launch date to an undetermined time after it initially was rumored to be this summer.

While it’s tough enough for tech startups to get up and running, and survive for any extended period, the environment for new airlines is even more turbulent, given high operational costs and the challenge of retaining customers.

“Around a half-dozen airlines try to start up every year. Almost none of them succeed,” said Jack Keady, an airline industry expert with Keady Transportation Consulting in Playa del Rey.

Becoming a darling of L.A.’s tech community was not something Wade Eyerly envisioned when he first batted around the idea for the airline in 2005. At the time, he was working for Vice President Dick Cheney’s advance media team while his younger brother had been accepted at a flight school.

The airline industry was in its post-Sept. 11 doldrums and each brother saw the troubles of air travel from different perspectives. Wade Eyerly, who was traveling 27 days a month for work, routinely suffered through intrusive airline security procedures. For David Eyerly, there was the looming reality of going into flight school right as the industry was laying off pilots in bunches.

“He asked me, ‘What’s the point of even graduating?’ ” Wade Eyerly remembered. “He was being sarcastic, but still I said, mostly as a joke, ‘What if we started our own airline?’ ”

The joke turned into an ongoing side project over the next few years and eventually became the beginnings of a business plan.

The business model is based on the Netflix-style unlimited rental concept. People who fly often could just pay a monthly fee, now set at $1,000, for an unlimited number of flights.

This was coupled with nostalgia for a bygone era when flying wasn’t a cumbersome chore, but a classy and comfortable way of traveling. Thus, the airline will fly out of smaller airports, where the FAA allows security checks to be done in advance. Fliers also will be able to drive up to the tarmac, hand their car keys to a valet and enjoy what is nearly a private jet experience for a substantially lower cost.

The airline estimates its three planes would handle about 500 subscribers, which could provide revenue of $6 million a year to start.

In reality, there is a limit on the “unlimited” flights. Customers can only have six flights reserved at any one time and cannot add more until a previous flight is complete, similar to Netflix’s policy of unlimited DVD rentals.

Surf Air’s routes were initially envisioned for business people and government employees who commute among Philadelphia; New York; and Washington, D.C. But the brothers decided to strengthen Surf Air’s business structure by applying to MuckerLab, one of the prominent accelerators to emerge from the Westside tech boom. It has a strict roster of Internet-based startups and, on paper, the decidedly untechie service industry startup was an odd fit.

“We generally don’t take on anything outside of tech startups at MuckerLab,” said President Erik Rannala. “But once we heard Surf Air’s pitch, we really couldn’t resist.”

As a result, the airline ended up headquartered a few blocks from the Pacific Ocean and the brothers decided to keep their homes in Santa Monica.

The decision to have one of the first routes between Los Angeles and Palo Alto stemmed partly from the obvious – bridging Los Angeles and the Bay Area links the state’s largest metropolitan areas. But the growing interaction between the two tech centers in particular made the route logical, especially since there are no commercial flights from any L.A.-area airport to Palo Alto.

“I think anything that makes it easier for venture capital and entrepreneurs to commute between Silicon Valley and Silicon Beach is going to be good,” said David Hernand, the partner in charge of the recently opened L.A. branch of the Silicon Valley law firm Cooley LLP, which specializes in high-tech companies.

Currently, though, it’s unclear exactly which local airport will be Surf Air’s hub. Santa Monica Airport is the first choice and the airline is in talks with city officials. However, nearby residents have been campaigning for years to close the airport due to environmental and safety concerns. Other locations are airports in Van Nuys and Hawthorne, neither of which is as centrally located to the tech community.

However, Jared Reitzin, chief executive of Mobilestorm, an L.A. company that develops mobile communications software, noted that the Palo Alto destination would make it convenient no matter what.

“Southwest is great, but it only flies into San Francisco or Oakland. This route puts me right into the middle of Silicon Valley,” said Reitzin, who has signed up for the service.

Eyerly stressed that even though the talk is about how the airline can serve the tech community, Surf Air is intended for a broader public. He would like to add destinations such as Las Vegas, Palm Springs and Lake Tahoe.

But all the talk has not only been in the the tech community, the larger media have taken notice as well. The airline has been featured in Forbes, the Wall Street Journal and other publications. Still, the industry is notorious for hyped new airlines that fail, many before they ever take off, according to Keady.

Surf Air’s business model is unique and promising, he said, but retaining customers to offset the high costs of running an airline will be a serious concern. Ultimately, customers might find the $1,000 cost not worth it.

Keady also estimated that new airlines need around $20 million in capital to maintain operations for a year, while Surf Air currently only has a fraction of that.

Despite the uncertainties, Wade Eyerly is optimistic that the early enthusiasm from prospective customers will not fade, especially given the growing hassle of flying out of major airports with their long lines and frequent delays.

“You’re buying back hours of time. You drive to the airport and get up to your meetings in an hour and a half,” he said. “It’s the flight experience of getting your first smartphone.”