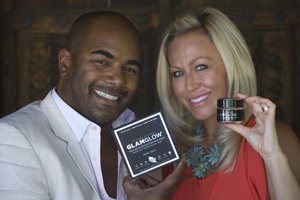 Dellimores with GlamGlow at their home in Encino. Photo by Ringo Chiu.

Here’s an unusual formula for success.

Hollywood company GlamGlow Inc. is turning dirt into dollars by selling processed mud at the beauty counters of major retailers across the nation.

In fact, husband-and-wife team Glenn and Shannon Dellimore are on track to make up to $3 million this year with one product – a skin-tingling mud mask dredged from the waters off Cannes, France, and processed at a factory in El Segundo.

Even more surprising: Mud masks haven’t been particularly popular in the beauty industry in recent years as they have been supplanted by more high-tech skin care products such as anti-wrinkle creams with potent chemicals.

But the Hollywood crowd has bought into GlamGlow, which claims to use a complex but all-natural process that transforms the mud into a technologically advanced facial treatment.

“Up to this point, mud has been looked down upon in cosmetics,” Glenn Dellimore said. “The trend has been that mud masks are cheap and they’re sort of nice, but they don’t do much. We’ve taken high-end skin care and mud, and we’ve fused the two together. We’ve created a new skin care category.”

After only two years in business, the couple has managed to make their mud masks available at W Hotels, Bliss spas and luxury department stores such as Neiman Marcus. The mud also is popping up in a growing number of local boutiques, such as Kitson, and will launch in national beauty supply store Sephora this week. By the end of the year, GlamGlow expects the mud to be available for purchase in 28 countries worldwide. It is sold for $69 in 1.7-ounce jars, enough for 10 to 12 facials. Among its competitors is Nars Cosmetics, a New York company that makes a similar mud mask that costs $45 for a 3.5-ounce jar.

Key to the company’s rapid success was a behind-the-scenes Hollywood endorsement. Glenn Dellimore had worked as a consultant for business people who wanted to open spas or health clubs, while his wife was a paralegal at Santa Monica entertainment law firm Kinsella Weitzman Iser Kump & Aldisert LLP.

The duo worked connections in the entertainment industry, and some of GlamGlow’s earliest customers were executives at 20th Century Fox and Universal Pictures who ordered home-made batches of the mud for actors to use before shoots.

Courtney Saavedra, director of operations for Kitson, said the mud’s sway in celebrity circles was a huge factor in why the 12-store retailer decided to stock GlamGlow.

“We had heard about it through industry insiders and that is really something that’s attractive to our demographic, knowing celebrity beauty secrets,” she said.

The idea for the mud mask came in 2009 when a celebrity friend asked Glenn Dellimore if he knew of any products he could use before going on camera that would have the same effect as a full-service $300 facial.

“We were surprised that we couldn’t find anything that would make a noticeable difference in 10 minutes,” Glenn Dellimore said. “Everything promised 30 days, 60 days, even six months.”

So the couple began doing research, hired a dermatological chemist, and self-financed a couple of samples they passed out to celebrity and entertainment friends.

Though the recipe for mud is simple enough – just mix dirt or clay with water – mud-based beauty products are more complex. GlamGlow has filed a 22-page patent for its beauty product, which uses mud sourced off the coast of Cannes by a supplier. Other ingredients include volcanic rock, green tea leaves, cucumber, marigold, ivy, lavender and other herbs.

In June 2010, the Dellimores officially founded GlamGlow to fill an order they had received from the W Hotel in Hollywood to stock guest rooms with the mud. Bliss began stocking the product in its L.A. spas at the same time.

But it wasn’t until Neiman Marcus came calling early last year that the pair got serious about the business and later ditched their day jobs. The two took out a small business loan to fund the department store order.

The couple hadn’t thought too seriously about how to brand the mud until then, and they were using a small factory in San Diego to fill orders. Shannon Dellimore said they had no choice but to get more professional if they wanted to work with Neiman Marcus, so they started working with a factory in El Segundo and a distribution center in Valencia.

“We were still shipping from home, but Neiman Marcus has a lot of requirements for labeling and shipping and things, so we had to find a distribution center,” she said. “We also decided we needed to grow to a bigger factory because of the Neiman Marcus order and what would happen from there.”

Shortly after the mud hit the shelves in Neiman Marcus stores, the couple flew to Cannes, where they had sourced the mud, to meet with beauty product distributors from around the world. They decided to establish a distribution center in Paris to manage global shipping.

Today, GlamGlow has seven employees, including its co-founders, and has introduced its product in foreign markets including Germany, Hong Kong and Brazil. The company expects to introduce a second mud product in October that will focus on treating problem skin.

“I think a product like this mud mask, small categories that the industry has thought were dormant areas, are beginning to show some new traction and interest,” she said. “People are finding ways to crack the code, so to speak, and this is another one of those items.”