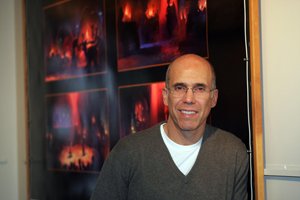 DreamWorks Animation SKG Inc., the Glendale studio known mainly for one thing – producing such animated film franchises as “Shrek,” “Kung Fu Panda” and “Madagascar” – suddenly is beginning to look more like an entertainment conglomerate. It is getting involved in a theme park, it has launched a studio in China, bought a prized film and TV library, and might even create a cable channel.

Unlike its much larger neighbor, Burbank-based Walt Disney Co., DreamWorks isn’t sinking huge capital into this diversification effort. Instead, it’s using licensing deals, partnerships and joint-venture arrangements where possible to expand beyond its core business of animated features.

In the last six months, DreamWorks has formed a studio joint venture in China; announced another joint-venture effort to develop an entertainment district in Shanghai similar to LA Live; agreed to license its franchise characters for a theme park in the Meadowlands area of northern New Jersey; purchased for $150 million the Classic Media film and television library that includes the “Lone Ranger” and “Lassie” television serials; and revealed it is exploring a DreamWorks-branded channel, either online or on cable television.

Driving the expansion effort is a need to be less reliant on an often volatile revenue stream centered on its animation features. Producing only two animated films a year means that revenues plunge in quarters preceding the releases and then spike in the quarters when the movies are released. The moves are also aimed at ensuring that the studio can survive in an era of declining DVD sales.

“The company has made a concerted effort to diversify its volatile revenue stream, which can be a risky business model,” said Tuna Amobi, senior media and entertainment analyst with S&P Capital IQ, a unit of Standard & Poor’s Inc. in New York. “They are trying to broaden out into more stable revenue streams and to monetize their successful franchises across several merchandizing platforms.”

The moves have been largely welcomed by analysts and appear to be a major reason why DreamWorks’ stock has stayed relatively steady despite weaker than expected earnings in recent quarters.

“People have faith in the longer-term outlook for DreamWorks with its emerging strategy for diversification,” said Tony Wible, an analyst with Janney Montgomery Scott LLC in Philadelphia.

A DreamWorks spokesman last week said company executives were traveling and could not be reached.

However, in an earnings conference call with analysts July 31, Chief Executive Jeffrey Katzenberg confirmed the strategic focus on diversifying the business.

“Beyond our core business, we are committed to growth and diversification of DreamWorks Animation more today than ever before,” he said.

Indeed, this isn’t the first time DreamWorks has attempted to expand beyond its core business. About five years ago, the company made several announcements to partner on the development of theme parks in several Persian Gulf countries; those plans were shelved as the global economic downturn hit.

However, the current effort is much broader and there’s more of a sense of urgency this time, largely because of a consensus that one of the largest current revenue streams for DreamWorks – DVD sales – is in permanent decline.

“They need to offset this by finding new sources of revenue,” Wible said.

Katzenberg said a major part of the diversification effort is growing the company’s international business, with the first focus being on China’s rapidly growing entertainment market.

In February, the company announced it was establishing Oriental DreamWorks in Shanghai as a joint-venture studio with three Chinese media and entertainment partners: China Media Capital, Shanghai Media Group and Shanghai Alliance Investment Ltd. The aim is to produce TV and film content with a Chinese cultural focus; the new studio will also host the production of “Kung Fu Panda 3,” now set for release in 2016.

Last week, DreamWorks announced that the same parties would develop Dream Center in Shanghai, a “cultural and entertainment destination” that is also set to open in 2016.

Meanwhile, back in the United States, DreamWorks Animation last month confirmed it is partnering with Mall of America developer Triple Five Worldwide on a theme park based on DreamWorks’ animated characters, including Shrek and Kung Fu Panda. Essentially, DreamWorks will be licensing the use of its characters and receiving a portion of theme park revenues.

Analyst Amobi said this deal is indicative of the low-cost way in which DreamWorks is expanding. He contrasted it with another deal announced recently in which Disney will develop “Avatar”-themed attractions at some of its theme parks.

“In the Disney deal, Disney is paying James Cameron’s company for the use of its ‘Avatar’ characters,” Amobi said. “This is the exact reverse: DreamWorks is licensing its characters to the theme park developer. DreamWorks is not trying to turn into another Disney here.”

But DreamWorks is spending money – $150 million – to buy the New York-based Classic Media’s library and related intellectual property. The library includes more than 450 titles and more than 6,100 TV episodes, including classics such as “Casper the Friendly Ghost,” the “Lone Ranger” and “Rudolph the Red-Nosed Reindeer.”

The deal gives DreamWorks the ability to have a consistent revenue stream not dependent on the vagaries of its animated film release schedule.

With the acquisition of the Classic Media library, DreamWorks has enough content to sustain programming on a dedicated entertainment channel. In last month’s earnings teleconference with analysts, Katzenberg indicated the company is considering launching just such a channel.

“I think this (acquisition) will go a long way for helping us realize the idea of a DreamWorks-branded channel, whether that’s a digital channel or cable or otherwise, (or whether) domestically or internationally,” Katzenberg said.

He has not given a timetable for launching a channel, though it likely remains several quarters off.

Looking ahead, DreamWorks executives have clearly signaled there will be more moves to diversify and expand the company’s revenue streams. Analyst Amobi said such a strategy does carry some risk that DreamWorks could lose focus on the core business that has brought it so much success over the years: animated features.

“Everything is moving to 3-D now, which is a very tricky technology to manage effectively, one that needs lots of focus,” he said.

As for turning into a huge media and entertainment conglomerate such as Disney, both analysts Amobi and Wible said that isn’t likely.

“These are baby steps in the Disney direction, but still far, far away from the size and scope of Disney,” Wible said.