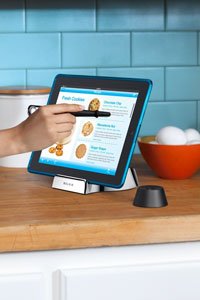 Chet Pipkin was a 21-year-old UCLA dropout when he founded Belkin International Inc. in 1981, tinkering away at his parent’s kitchen table in Hawthorne.

All that tinkering amounted to something: He turned the company into one of the fastest growing in Los Angeles, selling cables and other peripherals to serve the burgeoning computer industry.

Call the Playa Vista firm a maker of “appcessories,” which are products that work in tandem with mobile devices. They include mounts, protective cases and sleeves for smart phones and laptops, plus add-ons like tablet docks and Bluetooth music receivers.

“Over the last several years, sales have been relatively slim,” Pipkin acknowledged. “(But) if we get those experiences right, a positive emotional connection will grow and the market share will grow.”

So far, it looks like the company has made some strides.

In November, Belkin received five Consumer Electronic Show awards, including one for a tablet stand and stylus designed for kitchen use. The company is also promoting a wireless adapter that allows people to operate their home theater equipment with their laptops and stream video up to 100 feet away.

However, for all of Pipkin’s concerns, it’s not as if the company had stopped growing. Sales hit roughly $1 billion for the fiscal year ended Sept. 30. That’s an increase from $770 million in 2006.

But that growth rate over six years is a fraction of what Belkin had been experiencing. In 2003, the last of several years that Belkin made the Business Journal’s list of fastest-growing private companies, revenue was $550 million, up from $360 million in 2001.

Stephen Baker, a vice president at New York tech industry research firm NPD Group, said that he believes Belkin can again be a standout in a crowded market, provided it continually introduces products consumers take to.

“They have a great brand and are strong with retailers,” said Baker, “I think it’s a great place to be, but you have to pedal really fast all the time.”

Belkin’s competition includes Chino-based Incase Designs Corp. and Anaheim-based Mobile Edge LLC. Each have gained a significant market share and are now “two steps ahead” because they started out focused on laptops and mobile accessories, Baker said.

Mobile Edge, founded in 2002, specializes in laptop bags; Incase, founded in 1997, makes cases for phones and other electronics.

But brand loyalty and Belkin’s longevity can work to its advantage, said J. Nalder, a Brisbane, Australia-based co-founder of electronics review site Appcessories.info.

“As a company that has been making products for Apple’s ecosystem from the start, Belkin (is), if anything, becoming better at innovating and helping consumers find ways to integrate iPads and iPhones,” Nadler said.

Two years ago, Belkin moved its headquarters from Compton to its new 100,000-square-foot Playa Vista location. About 550 people work there, including engineers, product managers, marketers, designers and researchers. The rest of the company’s total 1,200 workers are in offices around the world.

About 80 percent of its products are manufactured by contractors in Asia. The other 20 percent is made in the United States. The products are distributed out of Belkin’s 8,000-square-foot facility in Plainfield, Ind.

Belkin has partnership agreements with Apple Inc., Amazon.com Inc. and Samsung, with each retailer reserving a certain amount of products. In the United States, millions of units a year are sold to Wal-Mart, Best Buy and Target. The company’s biggest line is products for the iPad3, including folio and keyboard cases, and charging and wiring products.

Pipkin’s goal is to have the company grow at least 10 percent annually, and be the No. 1 or No. 2 player in every category of the appcessory market for which it makes products.

“We always believed if we just listen to the voice of the customer that the answers will be pretty clear for us,” he said.