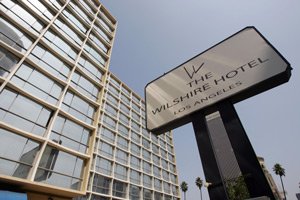 Exterior of the Wilshire Hotel in Koreatown. Photo by Ringo Chiu.

Ron Burkle may be best known as a supermarket magnate, but the Beverly Hills billionaire is now making moves that’ll likely earn him another label: hotelier.

In his first major investment in L.A.’s hotel market, Burkle purchased Koreatown’s Wilshire Hotel through a joint venture between his L.A. investment firm, Yucaipa Cos., and New York hotel developer and operator Sydell Group. The venture was formed earlier this summer with the goal of spending up to $1 billion to acquire and develop hotels.

The Wilshire, which sought bankruptcy protection earlier this year amid a tax dispute with the city of Los Angeles, is a 12-story, 385-room midprice hotel on Wilshire Boulevard near Normandie Avenue. It was purchased for $35 million in an all-cash deal that closed last month, according to a Sept. 1 bankruptcy filing by the previous owner, Majestic Towers Inc.

Burkle has been stepping up his investments in the hotel sector as the industry recovers from the recession, said Lloyd Greif, chief executive at downtown L.A. investment banking firm Greif & Co. and a longtime friend and adviser to Burkle.

“He made a lot of money in the supermarket space, and there’s not a lot of boutique plays in the space anymore,” Greif said. “At this point, he’s got a lot of money to invest and that’s why you see him branching out into the other industries and he’s leveraging his expertise in real estate.”

Burkle, who ranked No. 5 on the Business Journal’s list of Wealthiest Angelenos in May with a net worth of $4.3 billion, checked in to the hotel industry two years ago when an affiliate of Yucaipa invested $75 million in New York hotel developer and operator Morgans Hotel Group. More recently, Burkle raised his profile in the space by taking a seat on Morgans’ board and increasing Yucaipa’s stake in the company.

Until a few years ago, he was best known for leveraged buyouts of grocery stores. But in recent years, Burkle has acquired stakes in such companies as bookstore chain Barnes & Noble and struggling downtown L.A. apparel maker and retailer American Apparel Inc.

Even though Burkle has expanded his holdings, he hasn’t changed his strategy of investing in distressed assets, Greif said.

“The one thing that ties it together is opportunistic investing,” he said. “You are looking at a difficult economy when hospitality and leisure has been hit hard. If you’ve got liquidity and deal smarts, it creates opportunity for some attractive investments.”

“Things have been steadily improving in Los Angeles, which is widely regarded as one of the top 10 investment markets for hotels,” said Jim Butler, a partner and chairman of the global hospitality group at Century City law firm Jeffer Mangels Butler & Mitchell LLP.

The Wilshire’s previous owner, Majestic Towers, filed for bankruptcy protection in April. Several days before the filing, city officials sent two sheriff’s deputies to the hotel’s lobby to collect nearly $3.5 million in unpaid transit occupancy taxes, known as bed taxes. The tax dispute has yet to be resolved, according to bankruptcy documents.

The hotel had faced financial difficulties since Majestic Towers purchased the property in 2006 because the wages and benefits of the hotel’s unionized work force were “unduly burdensome relative to the hotel’s monthly income,” according to Majestic Tower’s bankruptcy filings.

Most significantly, Majestic Towers and previous owners of the hotel had strained relations with the union that represents hotel workers. But Sydell and Yucaipa, which purchased the property through a limited liability company, Sydell Wilshire LLC, have inked a tentative deal to restore workers’ wages and benefits.

“For a long time, there were two big problems that plagued this hotel: They owed a lot of back occupancy taxes to the city and they had a terrible relationship with the union,” said Andrew Zobler, chief executive at Sydell, which specializes in repositioning hotel properties such as an out-of-date Howard Johnson in Palm Springs that it turned into the trendy Ace Hotel.

Zobler was looking for a capital partner, and teamed up with Burkle when it was clear that the latter was looking to invest in the hospitality space.

“This is a new niche for Ron and until he gets his sea legs, I see him approaching it with partners,” Greif said. “He can leverage time and money better that way.”

Sydell and Yucaipa then formed a joint venture, which was announced in June and is planning to invest between $600 million and $1 billion in hotels. The venture may include equity partners. In June, Sydell and Yucaipa made their first deal under the venture by taking a stake in New York’s NoMad Hotel, a long-delayed project in the North Madison Square Park neighborhood, an area that’s undergoing redevelopment.

Sydell and Yucaipa then made a play for the Wilshire, beating out another bidder. The partners bought the property at what will be a bargain price if their transformation plans work out. The $35 million tab translates to about $91,000 a room. By comparison, Mondrian Los Angeles – which is the style they’re targeting – sold for $137 million, about $580,000 a room, in May.

“This is an example of someone not being afraid to take on a project that’s a turnaround situation with upside potential,” said Jeff Lugosi, a senior vice president at the downtown L.A. office of Colliers PKF.

Zobler said the hotel’s proximity to downtown, Hollywood and subway stops made it an attractive investment.

“It’s a beautiful piece of architecture and the rooms have great views” he said. “A lot of people overlooked it because it’s not in a prime location for hospitality, but we think there’s a real opportunity because the neighborhood is dense with nighttime activities.”

Over the past two decades, Koreatown has evolved from a high-vacancy zone to a bustling center of high-rise luxury condos and apartments with new shopping centers. But the neighborhood lacks a higher-end hotel to accommodate affluent Koreans traveling to Los Angeles for business or pleasure, Zobler’s target demographic.

“We hope to pick up a lot of that Korean business, which is being displaced to other neighborhoods because there are no state-of-the-art hotels in Koreatown,” said Zobler, who noted that the hotel’s sale has received a fair amount of press in Korean newspapers.

He wants to reposition the hotel, which hasn’t been renovated in years, as a lifestyle hotel that’ll compete with such properties as the Standard in downtown, and Hollywood’s Redbury and Hollywood Roosevelt.

Plans call for a $30 million, nine-month facelift. The design will be influenced by Korean styles. Bathrooms will be renovated, new furniture put in rooms and public spaces remodeled. The hotel’s restaurants will also be revamped. Sydell will operate the hotel as an independent brand.

But turning the Wilshire into a destination for Los Angeles won’t be easy.

“The challenge that they all face is building name recognition, a brand and target market appeal,” Lugosi said. “When you go into an isolated market like that, you are starting from fresh, building your brand. And whatever brand that is, it takes time and money.”

Zobler said the biggest challenge will be striking a balance in catering to both Korean and non-Korean guests. He wants to match the renovation to the needs of the guests and the possibilities of the building.

“We try to do something related to the real estate and the physical building and the neighborhood where it’s located,” he said, “We don’t come to the property with a preconceived idea of what we do.”