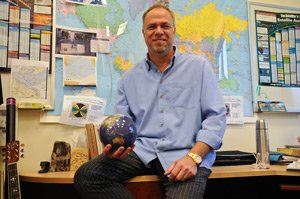 Row 44 CEO John Guidon at his office in 2009. Photo by Courtesy Photo

Row 44 really took off in 2009 when the company signed to supply Internet service to passengers on Southwest Airlines’ planes.

Now, the Westlake Village company wants to increase the altitude of its revenue by selling in-flight entertainment to fliers.

Howard Lefkowitz, the company’s chief operating officer, said the deals are significant because they show Row 44 has entered the media marketplace.

“We’re taking what had been a technology organization and making it a market-driven company,” Lefkowitz said.

The content will be kept on a server on the plane, which passengers will be able to access on Wi-Fi enabled devices. It will be an alternative to paying $5 for an Internet connection.

A source familiar with the deals said the studios will take half of passengers’ pay-per-view fees, while Row 44 and Southwest will split the remainder.

Row 44’s core business has been selling Internet connection hardware to airlines. The standard kit includes a 150 pound satellite antenna mounted on top of the aircraft and a series of routers that convert the planes into flying Internet hot spots.

Experts estimate the cost of installation to be more than $200,000 per plane, which is paid by the airlines.

Since last year, Southwest has installed about 100 of the Row 44 systems on its planes, and plans to outfit its entire fleet of more than 500 planes by the end of 2013.

Row 44, which has about 40 employees who report to Chief Executive John Guidon, hands over control of pricing and branding of its Internet service to airlines. Southwest has indicated interest in dropping the $5 charge and making in-flight Internet free.

The company’s name comes from Guidon’s experience in row 44 of a transatlantic flight on a plane. He has stated that the company’s goal is to make flying enjoyable even in a plane’s most undesirable seat.

A Row 44 executive told a trade publication that free Internet wouldn’t threaten its business model, since the company is paid based on the number of passengers flying on Southwest, rather than how many pay for the Internet service.

Row 44 also charges airlines for installation on a per-plane basis and in deals with other airlines it can get a share of fees paid for Internet services.

It’s unclear how many passengers may go for the pay-per-view option. The number of passengers who pay for in-flight Internet is believed to be below 10 percent, although Southwest doesn’t disclose that figure.

“Is it going to generate vast amounts of revenue? I would say no,” Farrar said.

He said passengers who are hesitant to pay for in-flight Internet won’t be any more likely to pay for streaming video.

If Southwest were to offer in-flight Internet for free, that would give passengers access to ground-based video on-demand options such as Hulu and Netflix. Those would compete with the pay-per-view deals offered by the airline.

But Row 44 and its competitors are increasing their streaming entertainment offerings despite the challenges.

Last week, industry leader GoGo Inflight Internet in Itasca, Ill., announced its video-on-demand service will be installed in all GoGo-enabled American Airlines planes by the end of next year. GoGo, which has deals with Warner Bros. and NBC Universal, charges about $1 for a streaming TV show and about $4 for a movie.

While Row 44 leaves installation fees to the airlines, GoGo pays for its $100,000 hardware installations.

GoGo also controls pricing and branding for the service, and shares revenue with airlines based on subscriptions. GoGo is considered the cheaper service.

Southwest began testing Row 44’s systems in early 2009. After gaining approval for its technology from the Federal Communications Commission later that year, the company signed with the airline, which began its roll out of the systems last year.