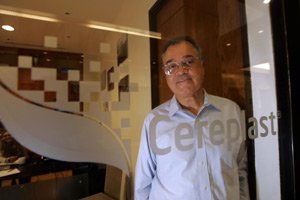 Are government regulations good for business? They’ve been good for Cereplast Inc.’s business, at least.

The El Segundo company makes resins, which are the building blocks of plastics. But its resins are made of plant material, which means they are biodegradable. The company has seen its sales skyrocket over the past year as new regulations in Europe have prompted businesses there to move away from oil-based resins.

In the first half of this year, Cereplast sold $15.4 million of its resins. That nearly matches the company’s sales for the previous four years combined.

“I would say 90 percent of that is due to the regulatory environment we have seen,” said Cereplast Chief Executive Frederic Scheer. “The whole ban on plastic bags has been fueling the growth of our company and of the bioplastics industry.”

Case in point: Italian companies didn’t buy a nickel’s worth of Cereplast resins in 2009 or the first half of last year. But in the second half of last year, leading up to an Italian ban on standard nonbiodegradable plastic bags that took effect in January, Italian companies bought $3 million of the company’s resins for biodegradable plastic. This year, they took an additional $7 million.

There’s more growth on the way. Shomik Majumdar, a vice president at Mountain View-based consulting firm Frost & Sullivan who follows the bioplastics industry, said Europe’s consumption of bioplastics is expected to climb 15 percent to 20 percent annually over the next several years.

“The whole pie is getting bigger,” he said.

Cereplast makes its plastic resin with starch from corn, potatoes and other food crops instead of with petroleum-based products such as polyethylene. It also makes long-lasting plastic resins using a combination of plant starch and petroleum products.

Despite the increased sales, the 10-year-old company has yet to turn a profit since going public in 2005. It lost $7.5 million last year and has lost $4 million in the first half of this year. The company has sustained itself on equity offerings and debt, most recently selling $12.5 million in convertible notes in May, which raised its long-term debt to more than $16 million.

Scheer projects that Cereplast should start turning a profit in 2012.

Jinming Liu, a senior analyst with Ardour Capital Partners in New York, said that sounds like a realistic goal.

Meanwhile, the company is on track to hit its consensus estimates of a $7.3 million loss, 47 cents per share, on revenue of nearly $32 million this year.

Scheer said he can’t put a number on next year’s earnings, but he expects to see sales at least double or perhaps quadruple.

Italy, with its ban on nonbiodegradable bags, is Cereplast’s biggest customer, but the company is expanding into other countries as well.

In the first half of this year, 95 percent of sales have been abroad, with some German companies being among its biggest customers. That’s a big change for Cereplast, which sold 90 percent of its products in the United States in 2009.

So far this year, the company has signed distribution deals with companies in Turkey, Croatia, Slovenia, Romania and Poland; it opened an office in Germany; and it announced plans to start manufacturing resins in Italy. The company used to make its resins in Hawthorne but moved U.S. production to Seymour, Ind., last year because costs are lower there.

Despite growth plans, distribution deals and sales figures, Cereplast’s stock price is down 32 percent from the beginning of the year, closing at $3.08 on Sept. 7.

Liu said Cereplast is still a young company that hasn’t proved itself to the market. He also noted that Wall Street is concerned about the company’s collection practices.

“Accounts receivable are a problem,” he said. “They need to send products over to Europe, and in Europe they pay relatively slowly. That’s one thing they need to improve.”

The company reported net accounts receivable of $15.8 million at the close of the second quarter, up from $11.7 million at the end of the first. Liu said the company’s high accounts-receivable balance was a big reason Cereplast sold notes this spring.

“They had to do it because of accounts receivable. They had to fund their working capital,” he said.

Scheer acknowledged that Cereplast carries a high accounts-receivable balance, but he also said that was only one factor in the company’s financing this spring. He said Cereplast is too small for traditional big banks, and can’t work with small banks because they don’t handle international work.

Scheer said he was not concerned about the stock price, adding he is hopeful that “the market will reward us down the road” as more plastic regulations create more opportunities for Cereplast.

The current regulations are mostly taxes or outright bans on standard plastic grocery bags. But Cereplast stands to gain even more from planned European Union regulations on food packaging.

In the United States, the bioplastics market isn’t doing as well, and the company expects growth at a slower pace than in Europe. That’s partly because Europeans will pay extra to be green.

Also, many California cities, including Long Beach, Malibu and Calabasas, have banned plastic bags outright, without an exception for biodegradable bags, which need to be disposed of at composting sites.

“There’s not a lot of composting going on in Long Beach,” Scheer said. “Europeans started the whole movement of composting years and years ago. It is just starting in our country.”

But Cereplast also expects domestic bioplastics demand, which Scheer described as minimal, to start increasing in the next year or two.

“I think that movement on bag bans will push the use and demand for bioplastics,” he said. “I’m expecting to see a growth and demand coming from the U.S.”