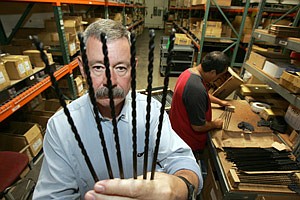 At Magnus Industries Inc., a Santa Fe Springs company that makes drill bits and saws, President Ding Kalis thinks he could get chewed up by an extension of workers’ comp benefits.

If a proposed state law passes, workers injured on the job could be covered as long as five years, instead of two. Kalis said doctors would be incentivized to add treatments and keep employees away from work longer. That would increase costs for companies like his.

“The way the economy is now … any additional expense like this bill could spell the difference between staying in the black and going in the red,” he said.

Kalis, who has five full-time employees, is just one of thousands of local employers in both the private and public sectors who could see costs rise if the bill, AB 947, by Assemblyman Jose Solorio, D-Anaheim, passes into law.

A legislative analyst said the measure, which is due for a vote in the Assembly in the next two weeks, could add more than $200 million to employer-paid workers’ compensation each year, with about three-fourths of the added costs hitting private-sector employers.

The bill was drafted to give injured workers more time to complete treatment. But employers say it would drive up workers’ compensation premiums, which are already on the rise.

“We simply don’t have the resources as public- and private-sector employers to make this kind of change,” said Gary Toebben, chief executive of the L.A.-area chamber. “If this were passed and employers had to absorb these extra costs, there would be less money to invest in the business and payrolls would suffer.”

Business owners fear that the law would encourage injured workers to drag out disability payments and treatment. That would reverse the effects of workers’ compensation reforms passed seven years ago.

“If you don’t have to go back to work and you’re getting money after two years, that’s an incentive not to return to work,” said Maryann Maloney, vice president of Maloney Meat Co., a family-owned butcher shop in South Gate that employs nine full-time workers and one part-time employee.

Maloney said that in recent years as the recession has cut into business, the shop has had to close two days a week.

“If costs go up for workers’ compensation, we would have to take other cost-cutting measures,” she said. “That’s not what we want to do; we want everybody here to continue to hold a job.”

The bill is supported by workers’ compensation plaintiff attorneys and some labor unions. They say the bill restores the right of injured workers to complete treatment before their benefits are cut off, and that the full five-year extension would only be applied in rare cases. They contend the two-year time limit on temporary disability payments now in place is too restrictive, especially when insurance companies are reluctant to approve expensive treatment such as surgery.

“In many cases, just getting the injured person the treatment they need takes the entire two years, leaving no time for the treatment to run its course,” said Barry Hinden, partner in L.A. workers’ compensation law firm Hinden & Breslavsky LLP. Hinden is also president of the California Applicants Attorneys Association, comprising attorneys who represent injured workers.

“We’ve had numerous cases in my office where an injured person is finally authorized for surgery, but by that time, the temporary disability payments run out,” Hinden said.

Temporary disability payments are designed to help injured workers make ends meet while they are forced to leave work to recover from injuries suffered while on the job. Back, shoulder and knee injuries are among the more common temporary injuries. When workers return to their jobs, the disability payments cease.

Injured workers had long been allowed to receive temporary disability payments for up to five years. But in 2004, Gov. Arnold Schwarzenegger enacted sweeping reforms to reduce skyrocketing workers’ comp costs. The new limit was two years, with rare exemptions granted for a few types of injuries that have longer recovery periods.

Solorio introduced AB 947 earlier this year as part of a three-bill package. Most business groups support the other two bills: One would rein in pharmaceutical costs for workers’ comp and the other would require companies to provide better information about workers’ comp to employees.

However, AB 947 generated widespread opposition from business interests, in part because temporary disability payments have already been increasing since the Schwarzenegger reforms. According to data released last month by the California Workers’ Compensation Institute, an insurance industry research organization in Oakland, temporary disability payments have climbed back to levels reached just prior to the 2004 Schwarzenegger reforms.

Many expect insurance companies to raise their workers’ comp premiums as soon as the bill becomes law.

“Insurers would make these changes up front to premiums so that they don’t get caught on the back end facing higher treatment costs and benefit payouts,” said Jim Scanlon, president of SGB/NIA, an independent insurance brokerage in Woodland Hills.

“When a company looks at this higher cost, it’s just one more barrier to adding workers,” Scanlon said.

Opposition to AB 947 is also coming from state and local government officials concerned about increased temporary disability payouts and higher treatment costs. Last month, Gov. Jerry Brown’s Office of Finance analyzed the bill and concluded that the California government would have to pay more.

Solorio introduced an amendment last month designed to address those concerns. The bill would allow the five-year extension only in cases where an injured worker delayed surgery to see if other treatments were effective. He said this would cut the cost impact of the bill by about 25 percent.

Critics of the bill, however, said that doctors and injured workers might be motivated to call for surgery at the end of the two-year period in order to extend the benefits.

Opponents also believe the amendment could even backfire by forcing more cases into the workers’ compensation litigation system to resolve disputes over whether surgery is a legitimate treatment option.

“The recent amendments to AB 947 do not address concerns over increased costs and our fear is that it will open the floodgates for more litigation,” said Randy Gordon, chief executive of the Long Beach chamber.