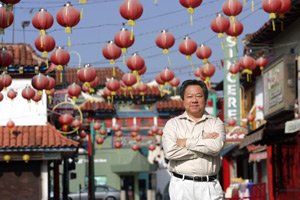 The revival of downtown Los Angeles has brought modern loft apartments, buzzing new bars and young hip residents to the neighborhood. But nearby Chinatown, one of L.A.’s oldest and most distinct districts, has been left behind.

Now, Chinatown appears poised for a renaissance of its own. Quietly in the last year, two residential projects have broken ground and more developments are planned. Meanwhile, the local business organization has launched year-round events to draw visitors to the area.

George Yu, executive director of the Los Angeles Chinatown Business Council, said the new activity should help transform the neighborhood into a thriving business district on par with downtown’s other hot spots.

“Chinatown is finally benefiting from the downtown development,” Yu said. “I think we are definitely on the right track with these new projects building up.”

The new developments, Lotus Garden and Chinatown Gateway, will bring housing and fresh retail space to the area. Business owners are anticipating that as more people move into the neighborhood, others will be more inclined to visit and become customers.

To get nonresidents thinking about the area as an evening or weekend destination, the Business Council began hosting Chinatown Summer Nights in 2010 with dancing, tastings from local restaurants, cooking demonstrations, and later hours at shops and museums.

“I definitely think that with the right redevelopment, Chinatown could become another little hot spot,” said Craig Chan, manager of Phoenix Bakery, a Chinatown fixture since 1938. “We’re excited to see people coming down here and bringing a different, more diverse group of folks to the neighborhood.”

Equity Residential, a Chicago developer that owns several downtown apartment buildings, broke ground earlier this year on the Chinatown Gateway complex. The building, which will sit next to the Chinatown gate at Broadway and Cesar E. Chavez Avenue, will have 280 residential units and will include 20,000 square feet of ground-floor retail space.

Also under construction is Lotus Garden, a 60-unit affordable-housing project that will be completed in December of next year.

“There are some exciting developments along with Lotus that are really going to bring some new energy and attention to Chinatown,” he said.

In the pipeline is Blossom Plaza, a mixed-use complex proposed for a vacant lot in front of Chinatown’s Gold Line metro stop. Forest City Residential Group is awaiting approval to start development on a 260-unit building, which was conceived more than seven years ago but was stalled by the recession. The project will include retail space and a cultural plaza.

Also in the planning stage is a complex at 808 N. Spring St. with about 120 residential units and ground-floor retail.

These developments could bring the kinds of young professionals who pioneered downtown living but who have largely avoided Chinatown. Yu said he’s not worried about pushing out longtime residents. Instead, he hopes to draw younger Chinese-Americans who often choose to settle near the Chinese communities in the San Gabriel Valley. After all, some of them will have to take over their family business one day.

“The gentrification of Chinatown, while it’s on our minds, it’s not something I’m overly concerned about,” he said. “There’s a tremendous amount of long-term stakeholders who will never sell their properties. And you have the younger generation. We have to involve them or there’s no one to turn this over to.”

The new residents could boost sales, which have lagged since the recession.

“Chinatown is further away from the central area of downtown and that’s a drawback,” said Elaine Ting, a manager at Plum Tree Inn restaurant. “I definitely think Chinatown will be busier with those projects.”

The district, which is just north of downtown and comprises about a dozen square blocks, was established in 1938. It thrived during the 1970s. The recent recession has been hard on the neighborhood. It may have seemed worse by comparison; condos, trendy restaurants and businesses popped up downtown and drew new residents. Nearby Little Tokyo also enjoyed a surge. Chinatown was largely bypassed.

Still, Yu said, it’s nothing compared to the state of Chinatown in the late ’90s, when it suffered a virtual depression. Many ethnic Chinese residents and businesses left for the San Gabriel Valley, and their children had no desire to return when they started their families.

To try to counter the trend, Yu and others raised money to start the Chinatown Business Improvement District in 2001.

“We needed to make a change,” he said. “The majority of major buildings were bank owned. Chinatown was in a state of economic depression.”

Over the last 10 years, the BID has worked to build up attendance at cultural events such as the Chinese New Year Parade and Moon Festival. Those events started out small, but Yu estimates that the parade now draws more than 100,000 people.

The group is also hosting its second annual press dinner this week at the Plum Tree Inn to promote Peking duck and Chinese-style roast turkey as alternatives to a traditional Thanksgiving meal.

Yu said the goal of the holiday events is to remind people that Chinatown can be a retail and dining destination during that time. And when other vendors shut down on Christmas Eve and Christmas Day, the lights at many Chinatown shops and restaurants stay on.

Chinatown Summer Nights began last year as a way to attract a younger crowd to the neighborhood’s fledgling art and nightlife scenes. The event, which was held twice this year, has attracted foodies and gallerygoers, said Jay Virata, regional administrator of the Chinatown redevelopment district for the L.A. Community Redevelopment Agency.

“It’s very successful,” Virata said. “It brought a lot of people to Chinatown that ordinarily would not have come.”