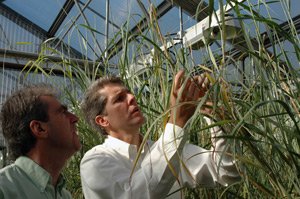 Is Wall Street ready to bet $100 million on a clean-burning fuel that comes from a plant called sweet sorghum?

That’s the question Ceres Inc. in Thousand Oaks will ask as it plans an initial public offering disclosed in a prospectus last week.

Investors will have to decide the likelihood of ever harvesting a profit from the company’s biofuel technology. The risks include market acceptance of sorghum and the economics of farming once the company’s seeds move out of the lab.

Ceres, founded in 1997 to develop genetically engineered seeds, has two commercial products: saw grass seed that it sells to farmers in the United States, and sweet sorghum seed for sale in the United States and Brazil. Both seeds produce crops that can be turned into ethanol, a fuel used in auto mobiles and electricity generation plants.

The company recently completed its first commercial planting of genetically modified sweet sorghum in Brazil. The South American nation is a leader in using ethanol fuel derived from sugarcane. However, seasonal weather limits the sugarcane crop to about 200 days a year. As a result, Brazil’s ethanol-based electricity plants run out of fuel and shut down for about five months of the year. By using Ceres’ sorghum, the electric plants could produce for several additional months because the plant is hardier and grows faster than sugar.

“Our largest immediate commercial opportunity is the Brazilian ethanol market,” the prospectus states. “The seed-based propagation, shorter growing cycle and lower water and fertilizer requirements of sweet sorghum relative to sugarcane will serve as the basis for expanded adoption of this product line.”

Ceres plans to expand its sales in Brazil to prove the economic viability of sorghum for ethanol production. Then the company hopes to convince electricity and gasoline producers in the United States and elsewhere to adopt the Brazilian model.

“The market is very receptive to this right now with the high price of oil and high hopes for biofuels,” he said. “There have been a number of IPOs announced. Now is a great window to get into the market.”

Riggs Eckelberry, Chief Executive of OriginOil Inc. in Los Angeles, an alternative energy company that went public in 2008, said the timing is right for Ceres’ IPO.

“They are at the stage when capital requirements explode,” Eckelberry said. “There’s money out there for companies in this space, and I think Ceres is going to do well.”

However, risks for Ceres include whether farmers will adopt the technology, the government will support sorghum as an ethanol source, and the economics of sugarcane and oil play out in its favor. The prospectus devoted 25 pages to explaining these risk factors.

Zalkin said that the risk disclosures in IPO documents are often boilerplate lawyer speak, but this one had entertainment value.

“It’s one of the funnier risk sections I’ve ever read,” said Zalkin. “Clearly, they don’t know how their product will work on the market. When they’ve done it in the lab it works, but what happens when you get out in the field? I think it will work, but it’s risky.”

Zalkin noted that Ceres is dependent on Brazilian farmers buying the seeds. If the price of oil or natural gas dips low, it makes no sense to plant sorghum because hydrocarbon fuels are more economical. Also, if the farmer plants sugarcane, he can sell his harvest to either food companies or electricity plants, depending on the price of table sugar. But sorghum, which is used to make molasses, is not widely used as a food for humans so the farmer loses that flexibility.

“That’s a risk for Ceres, at least in the short and medium term,” Zalkin said.

Finally, the conversion of the U.S. market to sorghum may run afoul of corn growers, who have established their crop as the main source of ethanol in the United States. Zalkin said corn is not a particularly efficient source for energy, but the political power of corn growers may restrict development of alternate biofuels.

Ceres plans to use the proceeds from the IPO on seed research and commercialization, according to its prospectus. The stock will trade on the Nasdaq Global Market under the symbol CERE. The offering is being underwritten by Goldman Sachs & Co. and Barclays Capital.

The filing with the Securities and Exchange Commission did not include a date, number of shares or estimated price for the stock issue. However, the filing said the company expects proceeds from the IPO will total as much as $100 million.

The company declined a request for an interview, citing regulations that prohibit a company from promoting an IPO during the quiet period after a prospectus filing.

Financially, the company resembles many other startups. In fiscal 2010, Ceres reported a loss of $22.6 million on revenue of $6.3 million. Since its founding in 1996, the company has accumulated a deficit of nearly $188 million.

“We expect to incur additional losses for at least the next several years as we continue to invest in our research and development programs, to develop new products and to move forward with our commercialization,” the prospectus states.

The company has sustained itself with capital from large institutional investors. They include Artal Luxembourg in Luxembourg, which owns 18 percent of the company’s equity; New York-based Warburg Pincus with 16 percent; and Boston’s Oxford Bioscience with 11 percent. Also, Monsanto Co. in St. Louis. a giant in the seed industry, owns 6.4 percent of the company.

Directors and officers of the company own 36 percent of the equity, including a 4.2 percent stake owned by Chief Executive Richard Hamilton.

Eckelberry at OriginOil, who is not involved in Ceres, believes investors and executives will be rewarded.

“People say this market for energy companies is like the late 1990s for the Internet, but it’s not,” Eckelberry said. “We are in the early stages and eventually the frenzy will be greater than the dot-com market ever was. People are putting their markers down and now Ceres will have its market position.”