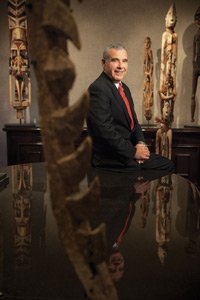 BUZZ: Still driven man. Finds himself in middle of latest campaign to bring an NFL team to Los Angeles. Maintains $800 million City of Industry stadium proposal is best site for return of team, despite momentum behind rival plan by AEG in downtown Los Angeles. It’s not his only stadium dream: in negotiations with University of Nevada, Las Vegas, to build 40,000-seat multisport campus stadium. Owns Silverton Casino in Las Vegas. Vietnam vet has two Purple Hearts and a taste for adventure travel; has climbed to base camp at Mount Everest and Mount Kilimanjaro, biked across Mongolia and taken submersible down to Titanic wreck. Reportedly bought ticket No. 128 to fly Virgin Galactic’s spaceship whenever ready for takeoff. On board of LACMA and Natural History Museum. Big contributor to alma mater USC. Donated $100,000 last year to environmentalist effort to stop Proposition 23, ballot measure that would have delayed state law regulating greenhouse gas emissions.