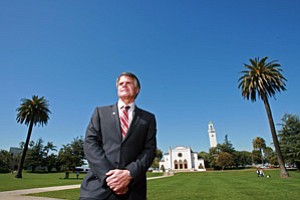 David Burcham, president of Loyola Marymount University, on the campus of the Catholic institution in Westchester. Photo by Ringo Chiu.

David Burcham is the first layperson to lead Loyola Marymount University, which was founded 100 years ago by Jesuits. He will now lead the Catholic university through a modernization of its campus and try to bring it out from the shadow of regional powerhouses UCLA and USC. To do so, Burcham, who began the president’s job in March, will have to tap the region’s business community for hundreds of millions of dollars over the next decade. He became a professor of constitutional law at Loyola Law School 20 years ago, where he later was named dean. Before he joined the law school, he was a partner at Gibson Dunn & Crutcher, where he represented controversial American Airlines chief Robert Crandall, among others. Before that, he clerked for a federal appeals court judge and U.S. Supreme Court Justice Byron White. He hails from an old-line Long Beach family with deep roots in local education and religious institutions. He recently met with the Business Journal in his campus office and talked about his experiences growing up in Southern California, clerking for White and how he built his own cabin retreat in a remote part of the Sierra Nevada Mountains.

Question: Did you ever think you would be the president of a Catholic university?

What was it like growing up in Long Beach?

We always had an inferiority complex growing up in the shadow of Los Angeles. People called us “Iowa by the sea.” But it was a terrific place to grow up. I remember as a kid going all the time to the Pike and paying 35 cents to have the roller-coaster ride of your life.

Why did you decide to go to law school?

I was a dissertation away from a Ph.D. in education policy in the late 1970s. But I came to the realization that the significant policy decisions weren’t being made by educators; they were being made by lawyers and judges. So I decided to attend law school and use that as a tool to continue to influence educational policy. That was my plan going in. But after my first year at law school, I found I really loved it. I loved all the subjects, so I decided I better have an open mind about my career.