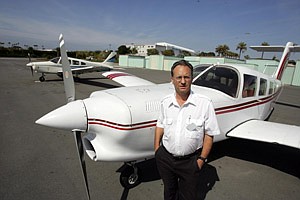 As a pilot, Nick Ullmann is an expert in aviation. As a flight school owner at Santa Monica Airport, Ullmann is getting a crash course in politics.

Ullmann and the operators of five other flight schools at the airport find themselves under attack from an unexpected source: members of the Los Angeles City Council.

For years, the city of Santa Monica has heard complaints from nearby L.A. residents about the noise and dangers of the municipal facility. But the airport, and specifically the aviation schools, are now coming under fire from Los Angeles City Council members Bill Rosendahl and Janice Hahn.

They recently introduced a resolution that would give the city’s Washington, D.C., lobbyists the authority to pressure Congress and federal agencies.

The immediate goal of any lobbying would be to force the Federal Aviation Administration to close the flight schools and change a flight path at the airport. The council members’ ultimate goal: close the airport. Even Santa Monica officials acknowledge that closure is a possibility.

“I don’t understand very much about city councils, but it seems pretty bizarre to me that somebody representing a district in L.A. has any power to close aviation schools in Santa Monica,” said Ullmann, who owns and is an instructor with Proteus Air Services.

“He’s pandering to the electorate,” he said of Rosendahl, “and he knows nothing about aviation.”

Closing the airport would bring an end to a facility that played a significant role in aviation history and the local economy. Built in the early 1920s, Santa Monica Municipal Airport is one of the West Coast’s oldest airports and was once home to Douglas Aircraft – which fueled the local economy for decades until its successor moved to Long Beach in the late 1990s.

The first plane to circumnavigate the world took off and landed at the airport in 1924. Since then, it airport has gradually grown in popularity with private jet users. It is, after all, close to Beverly Hills and Malibu.

The airport logs about 105,000 departures and arrivals annually. That amounts to some 285 flights a day as a destination and takeoff point for private and flight school planes, and chartered jets.

But as Santa Monica and Los Angeles have grown up around the airport, Rosendahl said the facility poses an unnecessary threat to residents under flight paths.

“The airport doesn’t belong in that urban environment anymore,” he said. “(Pilots) had a great run at the airport, but times change.”

Most planes now take off from the airport’s single east-west runway toward the ocean and fly over L.A.’s Venice neighborhood, which can potentially put them in the way of jets using Los Angeles International Airport.

Rosendahl wants prop planes using the airport’s single runway to make a 40-degree turn to the north soon after takeoff and avoid the jets, a heading the FAA experimented with for six months in 2009. He believes this would speed takeoffs and lower congestion at the runway, meaning shorter periods that private jets would sit idle and create pollution. (The private jets themselves would not be asked to use this path because of the severity of the 40-degree turn.)

The change in the takeoff route also would direct planes over Santa Monica homes north of the airport. In essence, Rosendahl said the planes from Santa Monica Airport should be a pest to residents in Santa Monica, not Los Angeles.

“The people in Santa Monica need to deal with what my constituents in Venice and Mar Vista deal with every day,” he said. “They need to get a little of their own medicine.”

Some flight school owners are unsympathetic to nearby L.A. residents.

“They knew they were moving into a house near an airport, and it cost a little less,” said Stuart Cook, owner of Skyway Aviation. “It’s kind of scary to think they’re trying to close the flight schools. We train a lot of pilots that go on to work at airlines.”

But there have been several recent accidents.

Two people died in a single-engine aerobatic plane in January 2009 when it crashed at the west end of the airport. Another pilot died in August 2009 when he tried to crash land his single-engine plane at the facility. And last year, a commercial pilot who rented a flight school plane crashed and died after takeoff on the Penmar Golf Course.

Owners said opponents of the flight schools have claimed that last year’s accident, which is still under investigation, involved a student when in fact the pilot was experienced. Cook said trainers and students also have been accused of performing risky maneuvers over populated areas when in fact they are done over the ocean.

“There’s a lot of misleading statements being made,” he said. “Students are not doing dangerous maneuvers. This is just another attempt to try and close the airport.”

Indeed, flight school owners feel they are pawns in a political game and assert that their operations are safe and important to the economy.

Consider Justice Aviation. Like most of the flight schools at the airport, Justice trains pilots of many levels. His is the largest school with about 20 instructors and 17 planes, mostly single engine, made by Cessna, Piper, Cirrus and other manufacturers.

Owner Joe Justice said the majority of the planes were built in the last 10 years, though he has a few that are 25 years and older; the oldest was made in 1976. All planes, he said, are required to be inspected every 100 flight hours.

Justice offers training to students who are new to flying and want their private pilot certification, and to those who want ongoing training, such as to get instrument proficiency. He said his operation has never logged a single accident.

Justice keeps his perspective when talking about the debate over the impact of planes on nearby neighborhoods. He said neighbors of the airport and people living in its flight paths have legitimate concerns about noise, but he believes concerns about safety have been exaggerated for political gain.

“No neighbor has been injured around the Santa Monica Airport and no flight training aircraft has hurt a person in Santa Monica for the 20 years that my company has been in business, and that’s a record to be envied,” he said.

When it comes to shutting down the airport, nearby resident Martin Rubin leads the march. His group, Concerned Residents Against Airport Pollution, has 500 members who live in Venice, Mar Vista and West Los Angeles.

“The pollution is happening all the time – whether a jet is taking off or idling,” he said.

Rubin cited a recent UCLA study of air pollution around the airport that found high levels of ultrafine particulates and black carbon, both of which can cause respiratory disease including asthma. In addition, he asserted that nearly half the flight traffic at the airport is from flight schools that use single-engine “dinosaurs” that are noisy and use leaded gas.

The group’s website features video of a private jet preparing for takeoff – blasting exhaust toward homes within 300 feet, causing porch umbrellas to fly away.

“The pollution can easily be smelled a mile away from the runway,” Rubin said.

Since that video, shot in 1995, the airport has added a blast shield. But pressure to consider closing the airport is coming from nearby residents.

Rosendahl’s initiative coincides with a “visioning” process for the airport by the city of Santa Monica, which owns the airport. The city in 1984 signed an agreement with the federal government to continue running the airport through 2014, and then review its future.

What happens after 2014 is up in the air, according to Santa Monica Mayor Richard Bloom. The city could continue operating the airport, could make improvements, turn over operations to a private management company or shut it down.

If the airport were shut down, Bloom said, the city could look at commercial uses and housing, including a park.

“Clearly, the option of leaving things exactly as they are is unacceptable,” said Bloom, who acknowledged that the airport has noise and safety problems. “But I would caution against demonizing the flight schools. They make the skies safer, not less so.”

He added that the city has just begun its economic analysis for potential uses of the property and does not have a completion date for the review.

Rosendahl, who is leading the charge against the airport, said he is not sure when his and Hahn’s resolution will go to the Los Angeles City Council. But it could be in the next month and he is confident it will be approved.

He envisions the land – a minute slice of which is owned by the city of Los Angeles – as a potential site for housing and parks. “That land could be put to better use,” he said.

Meanwhile, the FAA is studying the issue of the proposed flight path. Ian Gregor, the agency’s Pacific division public affairs manager, said the six-month change experimented with in 2009 created a “large volume of noise complaints from Santa Monica residents.” The FAA is analyzing the results of that test, and has not indicated when a final decision would be made on whether to reinstitute the path.

Gregor added that getting rid of tenants with leases at the airport – such as the flight schools – could be complicated if the FAA finds federal funds made their way to the airport, which is in dispute.

Still, as the owner of the airport, the city asserts it largely controls the airport’s fate.

For some flight school owners, moving from Santa Monica Airport to another small airport in the region is not an option.

Cook said there would be too much competition if he relocated to a similar-size airport.

In addition, Cook said he benefits from being near prosperous neighborhoods such as those in Beverly Hills, where residents have the money to spend on flying lessons.

“There’s a lot of wealth around here,” he said.

Whatever happens, Bloom said that he hopes the airport’s issues don’t create bad blood between the cities.

“I hate the idea of pitting one neighbor against another,” he said. “We need to take a reasoned and well-thought-out approach to these issues.”