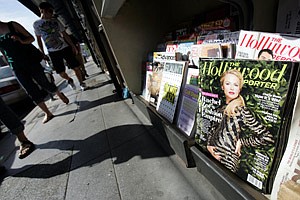 Editor's Note: This story has been changed from the print version to correct the name of Richard Beckman's company, Prometheus Global Media.

Expenses at the new slick weekly version of the Hollywood Reporter are high, and recent issues have not exactly been bulging with ads. Entertainment industry folks are wondering how long this publishing experiment can last.

But editor Janice Min doesn’t hesitate when asked if she thinks the large-format glossy magazine she launched last year will survive.

“We’ll be here 10 years from now – absolutely,” said the high-profile editor who ran US Weekly for six years. “I think we’ve achieved the one goal that every publication in America strives for: to be well-regarded and well-read.”

The magazine replaced the daily print edition of the show business trade paper. It now has a circulation of 72,000, up from 47,800 as a daily. But industry insiders and rivals noticed a dramatic drop in ad pages after the end of awards season last month – common for a show biz paper but troubling for a publication that has pinned its long-term viability on high-end consumer advertising.

“The amount of money the Hollywood Reporter has spent and is spending for the amount of ad pages they have is the talk of the town,” said Sharon Waxman, editor of TheWrap.com, which competes for breaking news with the Reporter’s website. “But I certainly give them credit for putting out a very good-looking magazine.”

Waxman thinks the publication faces “an impossible mathematical equation” in finding a big enough audience to support such a costly product.

“I think now is a fairly critical period for them,” she said. “We’re past the high-price advertising for awards season.”

During awards season, the magazine was chock-full with double-page or full-page campaign ads for such films as “The Social Network,” “True Grit” and “The Fighter.”

But after awards season, the March 18 edition had 11 full-page ads, and three of those were free “house” ads that promoted Reporter-sponsored events and products.

By comparison, the current issue of Vanity Fair with Robert Pattinson on the cover is 200 pages, has 13 double-page ads before you get to the table of contents on page 26 followed by 71 more full pages of ads.

But Min said she is not discouraged.

Advertisers in the March 18 “Style” issue include L’Oreal Paris and jeweler Van Cleef & Arpels. Official rates are $32,000 per page, and Min and others at the publication said they’re not discounting.

Min said advertising revenue from the Reporter’s print and online operations rose 50 percent from the magazine’s launch in November through the end of February. According to website traffic tracker comScore, the audience for the Reporter’s website last month reached 3.5 million – an 868 percent jump from February 2010.

“One year ago, people were ready to bury the Hollywood Reporter,” said Richard Beckman, chief executive of parent company Prometheus Global Media. “It is a remarkable achievement to come that far in one year.”

Min has also doubled her editorial staff to 65 employees and the editor herself was no doubt an expensive hire – she reportedly earned $2 million a year at US Weekly.

Min’s celebrity-centric touch can be seen on such covers as “The Business of Justin Bieber” and “Inside Kardashian Inc.”

“To try and pick a cover every week is brutal,” she said. “How do you make these stories travel into a wider sphere of people? That’s been one of the goals. There’s no law written into the journalism books that trade stories have to be boring. So it’s, can this magazine be fun? Can we look at the social side of the industry, the places to go, the parties, and make that aspect all rolled into one? It doesn’t have to be so dry that you want to shove a pen in your eye.”

Min moved from New York to Santa Monica with her husband and two young children to take the helm of the Reporter.

“For a place to succeed, you really have to have a deeply invested person at the top to drive the agenda,” she said. “When I work, for better or worse, I’m very obsessive. It’s either all or nothing.”