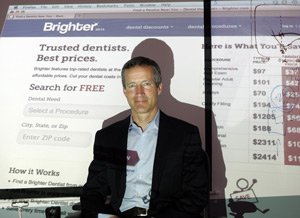 When Jake Winebaum found out his retired father-in-law paid more than $6,000 for three crowns at the dentist because he wasn’t insured, he decided to use his technology and business background to make it easier for people like his father-in-law to find affordable dental care.

“The amount of money that people are spending out of pocket on dental care is significant,” he said. “Those folks spent that money with no knowledge of what procedures should cost.”

The Santa Monica startup has a database of dentists nationwide who have agreed to offer Brighter members discounted rates on services such as a yearly checkup or cavity filling.

Brighter charges a $79 annual membership fee to give people access to the same rates – up to 60 percent off a procedure – that insurance providers are charged. It’s also offering a small-business plan that costs $49 a year per employee. No businesses have signed up, but about 30 companies have been testing the service for Brighter.

Brighter works like this: Anyone can search for a dentist on the website for free. A search for a Santa Monica dentist offering discounts on an adult checkup, for example, shows a list of nearby dentists offering the best deals. The website then shows which dentists will give discount checkups, for about $64 compared with the typical cost of $156. A person who wants to get the discount then signs up for a membership.

John Meyers, a partner at Ervin Cohen & Jessup LLP in the firm’s health care law department, said Brighter discounts could be more beneficial for someone who needs lots of expensive dental work than for someone just looking for a checkup.

“You have to look at how expensive the procedure normally costs and how much it costs with the discount and the Brighter fee,” he said. “You might, as an informed consumer, say that it’s worth it.”

Brighter launched last month with more than 25,000 dentists across the country on board. The company paid for access to the network of Careington International Corp., a Frisco, Texas, company that negotiates discounted rates with dentists for groups such as trade associations or unions.

Brighter is part of a growing number of startups aimed at making health care more affordable. Seattle’s Qliance charges a membership fee for access to its small group of physicians and doesn’t require insurance. One Medical Group in San Francisco offers primary care for an annual membership fee and accepts insurance from a number of providers.

Brighter, however, works more like a technology startup than a health care company. Winebaum previously founded Business.com, a web directory and business search engine that he sold for $345 million, and eCompanies, a tech incubator that helped fund LowerMyBills.com and launch Boingo Wireless Inc. He’s drawn on his tech background with Brighter, which fuses Yelp recommendations with pricing information to show customers the top dentists in their area.

But there are already dozens of companies that offer discounts on health care and dental care to the uninsured.

“Dental plans are more prevalent in the individual market because they can offer you something that looks like insurance but that’s cheaper,” Pourat said. “But the discount might not be enough, depending on your income, to really remove that price barrier.”

But the popularity of discount health and dental plans has also led to a number of fraud cases. The California Department of Managed Health Care started investigating these plans in 2005 after consumers logged complaints that some plans pretended to be insurance providers, overstated benefits, promised access to doctors who hadn’t agreed to give discounts or didn’t offer any savings at all. Since then, the department has ordered a number of plans to cease and desist until they change their advertising and business practices.

The department requires all plans operating in California to register and obtain a license, but won’t investigate a plan unless a customer has made a formal complaint, according to a spokeswoman.

Winebaum said he chose Careington because it has a proven track record and seeks to comply with all state regulations. In addition, Brighter’s website has a lengthy statement at the bottom of each page explaining that its memberships are not the same as an insurance membership.

As long as discount plans are upfront with customers, they shouldn’t run into legal issues, said Ervin Jessup & Cohen’s Meyers.

“I don’t see anything inherently wrong with the idea that somebody can aggregate buying power and then force discounts,” he said. “The issue was about companies misrepresenting themselves as an insurer. That doesn’t seem to be the case here.”