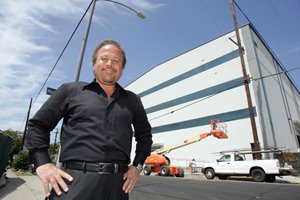 When Craig Darian, chief executive of Occidental Entertainment Group Holdings Inc., started building a sound stage on his Hollywood production lot in 2009, it seemed like a bold bet.

That’s because at the time, movie and TV productions were fleeing Los Angeles for states with attractive tax incentives.

Millions of dollars later, Occidental’s sound stage is nearing completion, and L.A. film proponents seem confident that his gamble will pay off.

“I see the construction of a new sound stage as evidence that filming is picking up,” said Joseph Chianese, senior vice president of tax, business development and production planning for Entertainment Partners, a Burbank filming consultant.

The 14,000-square-foot sound stage, which will open with a ribbon-cutting ceremony June 20, sits at the heart of Occidental’s 3.5-acre main lot in an east Hollywood residential neighborhood. The lot, which was built in 1913, also has three smaller stages and a cluster of bungalows that once housed production offices for Hollywood legends such as Cecil B. De Mille and Mary Pickford.

Darian said the company decided to build the stage after the Showtime TV series “United States of Tara,” which filmed its first season on Occidental’s main lot, moved filming of its second season to a bigger CBS facility in Studio City.

In total, the new stage cost Occidental about $12 million, including the cost of demolishing the old building, construction of the new one, work on the parking lot across the street and other related expenses.

Showtime recently canceled “United States of Tara,” so there’s no chance of resigning that show, but Darian said that wasn’t the goal.

“Even if we could not recapture ‘Tara,’ we knew we’d be a beacon that would attract other TV productions,” he said.

However, Darian doesn’t yet have a production signed to lease the space.

Filming construction in Los Angeles boomed in the 1990s.

But tax incentives in other states and countries have lured production out of Los Angeles, said Todd Lindgren, vice president of communications for FilmL.A. Inc., a private non-profit that oversees film permits in the city of Los Angeles.

Construction of production facilities slowed as a result of the loss of film projects.

California implemented its own film and TV tax credit in 2009 and Los Angeles has seen a pickup in filming as a result. On-location filming increased 15 percent last year compared with 2009, according to FilmL.A.

Lindgren attributed most of the increase to the state’s tax incentive.

“One of the things that makes L.A. great is the production infrastructure,” he said. “With our incentive in place, hopefully we’ll be able to win back some of the market share that we had lost over the decade.”

Darian said that Occidental hasn’t been hurt by runaway filming. Annual revenue is “in the eight figures” and annual profit is “in the seven figures.”

Projects filming on Occidental stages include the FX series “Sons of Anarchy” and “My Mother’s Curse,” with Barbra Streisand and Seth Rogen in a mother-son road trip movie.

Productions tend to rent Occidental’s facilities when a studio lot is full or when they’re looking for a less expensive option.

Occidental, which has 50 employees, also rents out office space, lighting and grip equipment, and props. The company will sometimes combine lighting and prop services with rent for production facilities and offer them as a package deal.

Those packages are a big incentive to small-budget projects, said Douglas Wellman, an assistant dean at the USC School of Cinematic Arts and an independent producer.

“Going into a facility that can provide a lot of different components of your infrastructure is desirable because it relieves you of the hassle of having to truck different things in from different parts of the city,” he said. “It’s a great time savings if not financial savings.”

Darian said the new sound stage should give Occidental more to offer new customers. And he’s not worried that it will sit empty for long.