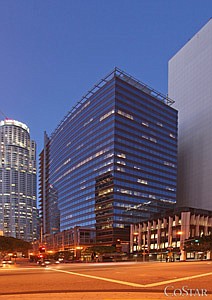 You know the state of the office market in Los Angeles County is iffy when one of the hottest areas is the San Fernando Valley.

But with transactions such as Majestic Investments’ purchase of a 274,000-square-foot office complex and Health Net California’s 334,000-square-foot lease, the Valley was besting several areas on the Westside by midyear.

To be sure, the countywide vacancy rate fell during the second quarter. But with high unemployment and lingering economic concerns, the market has yielded only a few large deals and many submarkets remain in a state of limbo, brokers said.

Indeed, while many professionals believe the market has already hit bottom, the recovery is, at best, very sluggish.

“What I see is sort of a tepid improvement in the office market,” said John Tronson, a principal with Ramsey-Shilling Commercial Real Estate Services Inc. “It’s certainly trending toward getting better, (but) you’re going to see a very slow and gradual increase in momentum in the office market.”

The county vacancy rate dipped to 16.5 percent in the second quarter from 16.9 percent as the market absorbed 396,000 square feet of space, according to data provided by Grubb & Ellis Co. It was the second time in the past three quarters that the vacancy rate fell, but it is roughly flat from a year ago.

Reflecting the mixed bag of news, Class A asking rents fell 3 cents to $2.92.

The weakness extended to the industrial market, which gave back space for the first time in three quarters. The vacancy rate was unchanged in the second quarter at 3.1 percent, but nearly 563,000 square feet of space was dumped back on the market.

In some areas, however, the news was decidedly more positive. Santa Monica’s office vacancy rate plummeted and asking rents surged amid an influx of tech and new-media firms (see article page 19), while the San Fernando and Santa Clarita valleys each saw their vacancy rates dip by more than a half-percentage point.

Hollywood, too, is trending positively, with its vacancy rate falling from 13.9 percent to 13.4 percent, and its asking rent rising nearly a dime to $3.92.

Tronson, who specializes in the Hollywood submarket, noted that the relative strength of the entertainment and new-media industries is keeping Hollywood’s office market bubbling. Two of the area’s largest office buildings – Sunset Media Tower and 6922 Hollywood Blvd. – are in escrow.

“The moons are aligning for Hollywood to become a very, very strong office market,” he said.

The pace of recovery countywide, however, has many brokers uneasy.

The unemployment rate remains elevated as few companies are looking to expand, said Matthew Sullivan, managing director of Lee & Associates. As a result, companies are merely moving from one building to another, with little positive effect on the overall vacancy rate – “musical chairs for tenants,” as Sullivan put it.

“Job formation and job growth is directly correlated to demand on office,” he said. “I don’t expect (a recovery) anytime soon. I think we’re in the new normal.”

The sluggishness can be seen in some traditionally strong submarkets. In downtown Los Angeles, for instance, the vacancy rate rose from 15 percent to 15.4 percent as the market gave back 131,000 square feet.

The area was hurt by some major defections, including Chicago law firm Howery LLP, which dissolved and abandoned 100,000 square feet of space at its Southern California outpost. It also didn’t help when Bank of America Corp., a major downtown tenant, downsized by 50,000 square feet when renewing a lease in its namesake building.

Steve Solomon, managing director with Jones Lang LaSalle Inc., said there is one part of the market that is going strong: investment purchases. On the heels of a $300 million sale in January of the Fox Interactive Media office in Playa Vista, Tishman Speyer is looking to unload its nearby Campus at Playa Vista project.

Solomon said it could fetch a pretty penny.

“‘A’ properties are selling for close to all-time (highs),” he said. “There’s been a lot of cash and debt available for the trophy assets.”