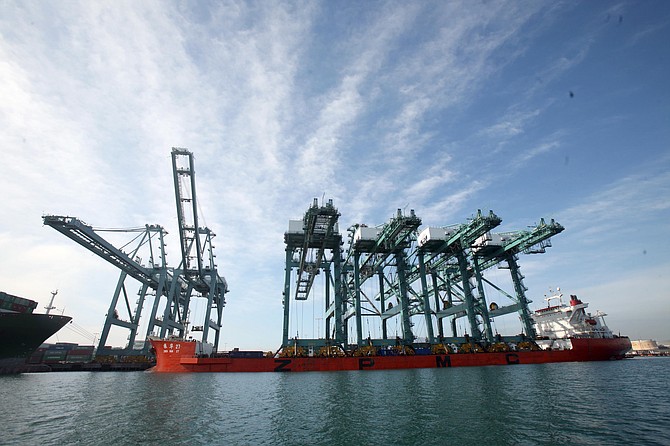 On a crisp, foggy morning last week, four giant cranes sat on a massive barge next to China Shipping’s terminal at the Port of Los Angeles.

Recently purchased by the Shanghai-based company for $9 million each, the cranes were waiting to be hoisted onto the dock for installation. Their purpose: to load and unload big ships, including the next generation of larger container vessels.

Those bigger cargo ships not only need the taller cranes, they also require the port to dredge its main channel to make it deep enough for them. But that simple act has suddenly created a sort of naval battle pitting the terminal operators against a proposed shipyard, the City Council against its Harbor Commission and one labor union against another. Even the Los Angeles Conservancy has taken a side in the fight. A council committee vote may come this Thursday.

The issue centers on where to put the dredge material. The port wants to pile it up in two big slips in an abandoned shipyard. The site has been approved as a dumping ground for the contaminated gunk. But a company has plans to revive that site as a shipyard – which the port complex could use – and create 800 jobs in the process.

However, any new plan to deal with the material could take years to get approval – and time is suddenly precious with some big ships already unable to navigate several terminals and bigger ships coming soon.

“Our core competitive advantage is to be able to handle these larger vessels,” said Michele Grubbs, vice president of the Pacific Merchant Shipping Association, which represents the shipping lines and terminal companies doing business at the port. “This is our future.”

A big deadline is 2014, when the Panama Canal is expected to complete a $5 billion widening project giving large freighters loaded with goods from Asia bound for the Eastern United States the option of bypassing Southern California altogether.

Several ports – including those in Mobile, Ala.; Jacksonville, Fla.; Savannah, Ga.; and Charleston, S.C. – are already undergoing major renovations designed to attract those ships.

“We face a changing competitive landscape,” said Geraldine Knatz, the port’s executive director. “That’s why this dredging project is so strategically important. We have a bull’s-eye on our back.”

However, there’s plenty of activity in Los Angeles. China Shipping – in addition to adding the massive cranes – is spending $121 million to double its footprint to 142 acres at the dock as well as construct new berths and expand its wharf to accommodate more business, including the bigger ships.

Another leading terminal operator – Trapac Inc. – is spending $274 million to extend its wharves, install new cranes and make other improvements, also partly in anticipation of the big ships.

The heart of the modernization is the $383 million dredging of the main channel that’s been under way for 13 years. The project, which will deepen the channel from 45 feet to 53, is nearing completion. It’s aimed at accommodating not only the larger ships currently calling on the port, but the next generation of vessels capable of carrying more than 10,000 container units. Many ships entering the port now carry about 8,000.

At the center of the controversy is Gambol Industries Inc., a Long Beach company that planned to spend $50 million renovating a 19-acre construction and repair facility at the port to build and service big ships. By rebuilding the site of the now-abandoned Southwest Marine shipyard at the southwest corner of Terminal Island, Gambol President Robert Stein said he can provide port denizens with a much needed service as well as create 800 permanent jobs.

“Why should customers drag their vessels up and down the coast when we have an ideal place to work on them here?” Stein said last year. “It will be a nice return for us, and serve the community’s needs.”

Port officials weren’t so sure: Two empty slips that are the centerpiece of Gambol’s plan, they said, were needed for the disposal of about 485,000 cubic yards of sludge – some of it contaminated – from the dredging. They planned to deposit the sludge in the slips.

So Gambol went back to the drawing board and came up with an alternate plan. Why not build new walls in the slips well inside their current walls? The sludge would be deposited behind the walls, making the slips smaller but still big enough for ship construction and repair.

For a year the company and the port wrangled over what could be done. The Harbor Commission turned the proposal down in December. The problem, commissioners said, was that Gambol’s plan for the thousands of tons of sludge was untried, therefore requiring extensive environmental studies to meet various state and federal regulations. That would mean a two- to three-year delay in the main channel deepening project, raising the specter that it wouldn’t be completed before 2014.

“What concerns us is the impact on our terminals should the project be delayed,” Knatz said.

Among the terminals most impacted, she said, would be those of China Shipping, Evergreen, Yang Ming, TraPac and Yusen Terminals Inc. Loss of traffic would cut into terminal revenue and cost some of the 43,000 jobs in and around the port.

At the urging of Councilwoman Janice Hahn, the City Council voted unanimously to reconsider the Harbor Commission’s decision at a hearing.

That hearing – before Hahn’s Trade, Commerce and Tourism Committee – is scheduled for Thursday.

“I feel that it’s my responsibility to represent the diverse groups that have come to support this shipyard,” Hahn said. “The labor community, environmentalists, historic preservationists: I want to bring together the brightest minds at the port and Gambol Industries to see whether we can figure this out.”

After the hearing, the committee could send the issue to the full council, which could then ask the harbor commissioners to reconsider.

“We could send a strong message that we don’t like what you did and want you to try one more time with perhaps a different outcome,” Hahn said.

“We’re very happy that the council has decided to take a look at this issue,” said Gambol spokesman Lou Baglietto. “We believe we proposed alternatives that could be accomplished with only minor modifications.”

Union leaders are split. Peter Peyton, president of International Longshore and Warehouse Union Local 63 representing 1,200 marine clerks in the port, believes any delay in the dredging project would be disastrous.

“It’s a critical issue and something that has me worried,” he said. “Our message to Gambol is, ‘We don’t care what you do as a business, just don’t interfere with the dredging project.’ ” He believes that terminal-related jobs would be lost by a delay.

“We think there should be an absolute determination on whether building the shipyard would cause a delay,” he said. Slawson represents workers who would be employed by the Gambol shipyard.

Paul Bingham, a transportation economist at Wilbur Smith Associates, a consultancy in Columbia, N.C., tends to side with the port. The potential delay to the channel-deepening project posed by Gambol’s plan, he said, “is one of the most significant threats the port faces in terms of keeping up with the competition. I don’t think that Knatz is wrong.”

But Gambol has the Los Angeles Conservancy on its side. The proposed shipyard site includes several old buildings left from the Southwest Marine days that deserve care, according to the historic preservation group.

“The Conservancy supports Gambol Industries in their efforts to revitalize this rare collection of buildings,” the organization says on its website. “We’ve worked for four years to prevent the demolition of the Southwest Marine Shipyard ... the last vestige of San Pedro’s once mighty but little-known World War II shipbuilding industry.”