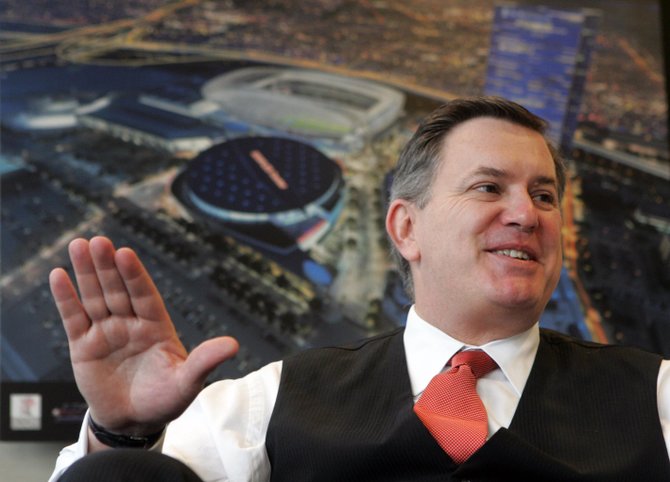 Billionaire Philip Anschutz is now on board with his namesake company’s plan to build a football stadium in downtown Los Angeles – he just wants some conditions met before he plunks down the cash.

That’s according to Anschutz’s top deputy in Los Angeles, Tim Leiweke, president of Anschutz Entertainment Group. In an interview with the Business Journal last week about AEG’s $1 billion stadium proposal, Leiweke said Anschutz, who made his fortune in oil and telecommunications, has been involved in many of the key decisions about the plan, including selection of the three stadium design finalists.

“He’s very enthusiastic about the project,” Leiweke said, adding that the Denver tycoon has discussed the matter with some of his friends who own National Football League teams.

But given his frustrations over previous plans he’s worked on to bring a football team to Los Angeles, Leiweke said his boss won’t sign any checks until four conditions are met:

• Agreements with various corporations for naming rights and other sponsorships that would bring in tens of millions of dollars in annual revenue.

• A commitment from Los Angeles city officials for speedy approvals and $350 million in bonds to replace the West Hall of the city-owned Los Angeles Convention Center that would be torn down to make way for the stadium.

• A commitment from an NFL team to move to Los Angeles.

• A commitment from the NFL itself to approve an L.A. team.

Leiweke said that AEG is trying to meet three of these four conditions by a self-imposed March deadline; the agreement from the league would likely have to wait for the owners to conclude negotiations with players over a new contract.

The corporate sponsorships are perhaps the most crucial element for Anschutz, since they represent the revenue stream that would pay back his huge up-front financial commitment.

Earlier this month, reports surfaced that AEG was close to terms with Farmers Insurance Group for stadium naming rights. Financial terms were not disclosed, though sources told the Los Angeles Times that AEG was seeking a 30-year deal starting at $20 million a year.

Leiweke did not confirm or deny those reports. He would only say that a deal for naming rights and several deals for “founding partner” sponsorships would be announced in the coming weeks.

The AEG proposal is in competition with Majestic Realty Co., which has been trying to bring a football team to a stadium it wants to build in City of Industry.

Marc Ganis, president of Sportscorp Ltd., a Chicago-based sports consulting company, said that getting a commitment for naming rights and sponsorship deals would bolster AEG’s position as it prepares to enter talks with NFL team owners about moving a team to Los Angeles.

“Corporate sponsorships and naming rights are reasonable to get before the facility itself has all the approvals. Those are the kinds of agreements that businesses can make up front,” Ganis said. “Furthermore, these agreements can strengthen AEG’s position in dealings with the NFL.”

Leiweke said he was confident that a preliminary agreement could be reached with the city by March. However, several City Council members have called for studies of AEG’s proposal and its impact on the Convention Center before they will vote to support the company’s plan.

Councilwoman Jan Perry, whose district includes the Convention Center and AEG’s adjacent L.A. Live complex in downtown, said she is open to the plan, but wants to see more details about the company’s proposal before committing her support.

“We want to see some assurances that the taxpayers and the city’s general fund are protected,” she said. “Also, we want to see some figures on how much revenue would be generated over and above what the site is now generating.”

Perry has convened a working group that will start analyzing the plan next month. After that, city officials will use the analysis as a basis for a meeting with AEG. Although she wouldn’t rule out meeting the mid-March deadline, the timetable she laid out would make it difficult to do so.

Leiweke’s comments are significant because Anschutz’s support of the project has been characterized as cool or lukewarm in recent published reports, although the press-shy Anschutz was not quoted himself in any of those reports.

Building the stadium itself on the site of the current West Hall of the Convention Center would cost about $1 billion, including a retractable roof that would allow the stadium to serve as convention floor and meeting space. Leiweke said an estimated $150 million “buy-in” for a football team and $350 million in bonds to pay for a replacement building at the Convention Center would bring the total cost to $1.5 billion.

Even if the costs rise beyond that, Leiweke said that the project will be entirely financed by AEG in order to avoid controversy.

“The important thing here is that this is our money, so it shouldn’t matter to anyone else whether it’s $1 billion, $1.2 billion or $1.5 billion. We’re going to pay for the stadium – whatever it costs. Period.”

Leiweke said Majestic’s $800 million proposal still lacks a team despite Roski’s long efforts, and that the NFL owners don’t seem to want a team in the City of Industry.

“I like Ed Roski and respect him, but they’ve been working on this project for a long time and they don’t have a team,” he said. “The reason is simple: Team owners and the NFL don’t believe that the City of Industry is the right location for a football team.”

NFL Commissioner Roger Goodell has said that the NFL owners won’t get around to deciding whether to bring a football team to Los Angeles until a new collective bargaining agreement with players is in place. The current agreement expires March 4 and Ganis said he expects the negotiations to drag on at least through the spring.

“There is no way a decision about putting a team in L.A. will be made before the collective bargaining agreement is reached,” Ganis said. “Any talk about convincing a team to move to Los Angeles before that is pure fantasy.”

Leiweke said that Anschutz could wait beyond the March deadline for an NFL decision.

The L.A. region has been without an NFL team since the Rams left Anaheim in 1995 for St. Louis; the Raiders left the Los Angeles Memorial Coliseum the previous year and returned to Oakland.

In 1999, Roski and Anschutz took part in a proposal to renovate the Coliseum in Exposition Park as a home for an NFL expansion team. The league picked Houston instead when that city agreed to $200 million in public subsidies. Los Angeles officials had rejected any public funding for Coliseum renovation.

Although several writers and observers have opined that taxpayer money must be involved at least in a fairly substantial way in AEG’s plan, Leiweke last week repeated that no public money would be used to fund the stadium.

He said the $350 million would pay for a new hall at the city-owned Convention Center to replace the West Hall, which would have to be torn down to make way for the stadium. The bonds would be paid off with a surcharge on tickets sold for events at the football stadium; any shortfall in the bond payments would be covered by AEG.

“This keeps getting labeled as public financing for the stadium, but nothing could be further from the truth,” Leiweke said. “If we weren’t stepping in with this proposal, the West Hall would have had to be replaced eventually anyway, and that would have been with taxpayer funds. This way, the city gets a new convention hall and taxpayers don’t pay a dime for it.”

As Majestic was planning its stadium, City of Industry approved $500 million in bonds for infrastructure improvements in the city, some of which will be spent on streets and other construction for the stadium. The bonds would be paid for with revenue from ticket and parking surcharges.

“The Majestic proposal is the preferred site and best suited for the NFL and Southern California,” Semcken said in an e-mail.

Leiweke said his biggest concern is the possible emergence of opponents who could delay or derail the project.

“The only thing that keeps me up at night is someone throwing grenades at the project for their own personal agenda,” he said.

If the project were to get sidetracked – or if Majestic manages to secure a football team first – Leiweke said he has plenty of other projects at AEG to keep him busy.

“I’m off to Beijing tomorrow for a stadium project we have there that we just secured naming rights on,” he said.