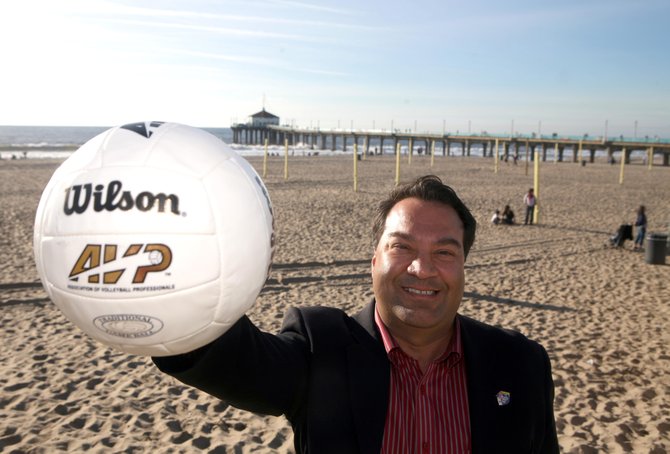 With the collapse of the AVP Tour last summer, the nation’s top beach volleyball tournament – the Manhattan Beach Open – is up for grabs.

The bankruptcy of the Association of Volleyball Professionals Tour did not leave the sport’s premier event stuck in the sand: Several parties are looking to take control of it. They include the Olympic sanctioning body for U.S. volleyball; sports marketing firms; and the lead AVP creditor, who bought the tour’s assets out of bankruptcy.

“The AVP brand is the most important brand in beach volleyball in the world. It’s going to be tough to relaunch it, but I don’t think it will ever go away,” said Dave Williams, managing director of beach volleyball for USA Volleyball, the Olympic sanctioning body.

The Manhattan Beach City Council was ready to move forward with a plan at its Dec. 21 meeting to give control of the tournament to a joint venture of USA Volleyball and International Management Group, a New York-based sports marketing firm that handles everything from Indian cricket to the Rugby World Cup.

The joint venture offered to sanction and manage a professional volleyball tournament in September as part of a short pro tour. But the bid was strongly opposed by two other companies, including Ion Sports, an L.A. company that owns a cable network and the media rights to the Manhattan Beach event.

However, the firms had not fully developed a proposal, and the council postponed a decision until Jan. 18.

In any case, the beach city wants to resuscitate an event that was once its leading attraction, generating taxes for the city and revenue for its businesses.

“Whoever takes over needs to bring us back to the days when AVP was at its height,” said Manhattan Beach Mayor Richard Montgomery. “Hotel rooms were filled, downtown restaurants were packed, parking lots were full and everyone does well.”

Last year, AVP shut down operations just prior to the Aug. 21-22 tournament. It had lost several blue-chip sponsors, ran out of cash and failed to find investors. A subsequent bankruptcy filing indicated that the company had assets of just $184,000 and debts of $4.5 million.

The city stepped in at the last minute and operated the tournament with help from Williams, a former AVP executive hired by USA Volleyball earlier in the year. The tournament offered just $25,000 in prize money and many professionals boycotted the event, which normally attracts the sport’s top names.

City officials have pledged to find an operator that is financially stable and can attract top sponsors. It also would like to charge a fee or get a cut of the action, and not just have security and other expenses recouped.

USA Volleyball’s joint venture is looking to produce an event with a total of $150,000 in prize money. (In 2009, AVP awarded $250,000 in prize money at the event.) Manhattan Beach would be the culmination of a five-stop Beach Championship Series that would include events in previous AVP tour cities including Hermosa Beach, Huntington Beach and Chicago.

However, players are a bit leery. After the AVP bankruptcy, players formed an association to represent their interests, with a board that includes Olympic gold medal winners Todd Rogers and Kerri Walsh. Hans Stolfus, a former player acting as spokesman for the association, said that aside from any concerns about USA Volleyball, the players are focused on maximizing prize money.

“It’s not to say USAV isn’t welcome or won’t do a good job, but players want to be able to negotiate with private enterprise to keep the sport as lucrative as it once was,” Stolfus said.

Meanwhile, Ion acquired all media rights to the event from the city last year after the AVP bankruptcy. It set up an event website and carried the tournament on its Ion Television cable channel. It holds the rights to the upcoming event and has an option for future ones.

“We are already invested in the Manhattan Beach brand, and we would like to continue building that relationship with the event and the town,” said Ion Chief Executive Dave Behar.

Ion may make its own bid or partner with Cleveland-based Elevation Group, an International Management spinoff that is run by Steve Lindecke, who served as volleyball star Karch Kiraly’s agent. Elevation runs several grassroots and amateur beach volleyball tournaments.

Meanwhile, AVP saw its assets sold in bankruptcy court in December to an investment group that was the league’s largest stakeholder, RJSM Partners, which had invested $3.8 million in the tour and controlled 72 percent of the company. Other shareholders, who voted down a $36.9 million acquisition of the company in 2008, were left with nothing.

Nick Lewin, managing partner of RJSM, said it may be difficult for the firm to rebuild the tour. So it’s possible that instead of bidding to do so, the company may choose to sell the AVP name to any new tour operator, which otherwise would have to come up with its own name.

“It doesn’t look that way, but we could look at that, too. That’s a financial decision.” he said. “While the (AVP) name may be damaged in the sports marketing world, in consumers’ eyes, it’s still associated with beach volleyball.”