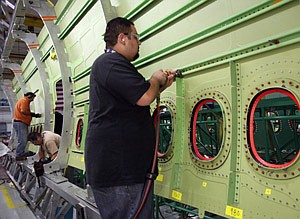 Jack Northrop Avenue in Hawthorne comes to life at about 5 a.m.

The 1.5 million-square-foot factory next to Hawthorne Municipal Airport and five miles from Los Angeles International Airport is famous as the place where aviation pioneer Jack Northrop founded Northrop Aircraft Inc. in 1939. And since 1966, it’s been rolling out fuselages for Boeing 747s, including several Air Force Ones.

It’s also becoming known as one of the few growing programs that have emerged recently in L.A.’s otherwise-declining aerospace industry, which has shed 100,000 or so jobs over the past 30 years.

In fact, the number of employees at the factory has nearly doubled in the last five years. And beginning late this year, plant executives will hire even more. The reason: to accommodate burgeoning production of fuselages for the latest – and biggest – version of the 747.

“This has been a shot in the arm for the local economy,” said Dana Dickson, president of the Hawthorne plant. “This is a tremendous airplane. It’s been absolutely good news.”

Boeing developed the airplane, the 747-8 Intercontinental, as an answer to the Airbus A380, which has challenged Boeing’s position as the preeminent manufacturer of large passenger aircraft since it started flying in 2005.

The first radically altered upgrade of the 747 since the jumbo jet’s debut in 1968, the plane was unveiled amid much hoopla earlier this month. At 249 feet, the 747-8 is 18.3 feet longer than its predecessor and seats 57 more passengers, with a maximum seating configuration of 467. Each plane costs $318 million.

The question is in what quantity the orders will roll in, in light of stiff competition afforded by the Airbus A380, which costs $58 million more but has a maximum seating capacity of 525.

Boeing has so far announced 107 orders for the 747-8: 33 for passenger jets from Lufthansa and Korean Air, as well 74 for cargo versions from multiple carriers, including Cathay Pacific, Dubai Aerospace Enterprise and Nippon Cargo Airlines.

By contrast, the A380, which is only sold in a passenger version, has had 244 firm orders since its debut.

Boeing has been on a roll of late. Last week, the Pentagon announced that the company was chosen to build the military’s new air tanker. The contract has a potential value of up to $35 billion and is expected to mean thousands of new jobs and more than $100 million in new orders for Boeing contractors in Los Angeles County. The tanker will be assembled in Everett, Wash.

And that’s not the only recent good news for L.A.’s aerospace industry, which had been in the dumps after the announcement a year ago that Northrop Grumman Corp. would relocate its corporate headquarters from Century City to the Washington, D.C., area this summer.

Since then, the company has announced hundreds of local layoffs, but the past few months have seen a pickup at Northrop Grumman’s F/A-18 assembly line in El Segundo, where some 1,100 workers are employed. The aging fighter had been set to be phased out, but problems with its replacement, the stealthy F-35 Joint Strike Fighter, have kept the local assembly line humming.

Northrop owned the 747 fuselage plant until 2000 when it was sold to Dallas-based Vought Aircraft Industries, which later merged with Triumph Group Inc. of Wayne, Penn. The historic factory has a classic airplane hangar look comprising a series of cavernous buildings attached end to end.

Inside them, a small army of workers stationed along an assembly line puts together the huge airplane fuselages piece by piece before they are painted.

Unlike the old days when everything had to be hand-tooled, Dickson said, today’s manufacturing process is largely accomplished by digitally programmed machines that do everything from drilling holes in the proper sequence to bending sheet metal into shape. Along the way, skilled workers add finishing touches.

Finally, loaded into boxcars, the enormous airplane pieces are picked up by freight trains and hauled to Boeing’s plant in Everett for final assembly.

Boeing boasts that the 747-8 has a 12 percent lower per-seat operating cost than its predecessor, provides 16 percent better fuel economy and makes 30 percent less noise. It has a range of 8,000 nautical miles, compared with 8,300 for the Airbus A380.

“We believe the very large airplane segment has a market of more than 700 airplanes worth about $220 billion over the next 20 years,” said Boeing spokesman Jim Proulx. “Our plan is that a significant portion of those be our 747-8. We expect to be making and selling them for years to come.”

Workers in Hawthorne are now producing one and a half fuselages per month. By the middle of next year, Boeing plans to increase production to two planes per month, requiring a 10 percent boost in personnel at the plant, Dickson said. Vought will start hiring more workers toward the end of the year.

“If they retain production there for the long term it will be a real shift,” said John Husing, an economist and owner of Redlands research firm Economics and Politics Inc. “We’re used to losing those sorts of jobs, not gaining them. I’m pleasantly shocked.”

The plane is undergoing test flights, with the cargo version expected to be delivered midyear and the passenger jet sometime in the fourth quarter.

How profitable the jumbo jet may be for Boeing remains to be seen. Due to various delays in the airplane’s development and production, the 747-8 was unveiled a year later than expected and the program will cost at least twice as much as a projected $2 billion.

And though the jet liner’s list price is less than the A380, Airbus has shown a willingness to discount its price.

“If this were a $2 billion project, it would be a fantastic success,” said Richard Aboulafia, vice president and chief analyst for Teal Group Corp., a Fairfax, Va.-based consultancy to the aerospace and defense industries. “At $4 billion to $5 billion, however, Boeing is going to have to work hard to recoup that; it’s going to be a tough call.”

Nonetheless, he predicted, the company is likely to have at least a modest success with the program, perhaps selling about 18 cargo planes and an additional six or so of the passenger models annually.

“The baseline scenario is that they will get to build two airplanes a month for a couple of decades,” Aboulafia said. “And there’s a good chance it could be profitable.”