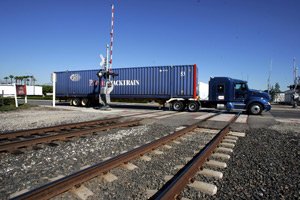 Railroad crossing at Fairway Drive in City of Industry. Photo by Ringo Chiu.

Unlike most truck drivers who tend to hit the road early, those working for Frank & Son Trucking & Warehousing in Walnut rarely leave before 9 a.m.

As a result, they generally work late delivering paper products throughout Southern California, finishing up when most other drivers have long arrived home.

The reason: debilitating rush-hour traffic jams on nearby Fairway Drive caused by trains – most at least a mile long – that lug freight from the region’s ports.

“Getting onto the freeway is a nightmare,” said General Manager Dennis Richardson. “The traffic literally backs up. It’s a big cluster mess anytime a train runs by.”

Unfortunately, the situation may get worse.

A two-decade project to improve crossings at the two Union Pacific railroad tracks that run along the southern San Gabriel Valley could be derailed by rapidly dwindling federal funding – and intensifying competition for what’s left, including Los Angeles Mayor Antonio Villaraigosa’s plan to speed up construction of the so-called subway to the sea.

In 1998, the San Gabriel Council of Governments approved a $1.5 billion program, called the Alameda Corridor East, to improve crossings over 70 miles of tracks from East Los Angeles to Diamond Bar. The bulk of the project consists of 20 grade separations allowing trains to pass without interrupting the flow of trucks and cars.

“I would say that completing those grade crossings is very important, both from the perspective of business and the community – whether it will ever happen, though, is anybody’s guess,” said Fran Inman, who serves on the California Transportation Commission and is senior vice president at Majestic Real Estate Co., the largest commercial property owner in the City of Industry.

Residents and business owners have long complained about delays caused by train traffic, which only got worse as the ports of Los Angeles and Long Beach handled more goods as international trade boomed. The project was seen as even more critical with the 2002 opening of the Alameda Corridor, a 20-mile sunken rail line built to speed cargo from the ports to East Los Angeles rail yards – where it then proceeds east into the San Gabriel Valley.

The crossings in question, in addition to those at Fairway, are at Montebello Boulevard in Montebello, as well as the City of Industry’s Rose Hills and Turnbull Canyon roads and Puente Avenue.

Those who live or work nearby say that massive traffic jams with delays of 30 minutes or more are not uncommon during rush hour as the freight trains pass through. Near Fairway, in fact, clusters of idled trucks often wait in the parking lot of a Carl’s Jr. Restaurant as the trains go by.

Over at Frank & Son, a block from the tracks on Walnut Drive, Richardson said he has had to completely revise delivery schedules to work around rush-hour traffic jams.

“A lot of drivers are going further down surface streets to get on the freeway. They’re all just punching and dodging,” he said. “Everybody starts later and gets back in later.”

In fact, company owner Frank Zamarripa said he had considered relocating another company he owns in Industry, Frank & Son Collectible Show, to a larger and more convenient location nearby. But he decided against the move due to traffic uncertainties.

“If we’d moved, we’d have lost money,” he said, noting that traffic conditions regularly make employees late for work. “They’ve been talking about (these improvements) for years, but you’re trying to run your business and it’s just a guessing game.”

Peter Amundson is president of Minuteman Transport Inc., an Industry distributor of perishable food commodities to warehouses throughout Southern California. He said traffic jams caused by a rail crossing a few blocks from his East Proctor Avenue plant have caused his company’s dispatchers and 35 drivers to become experts on traffic flow.

“It’s a matter of constantly adapting,” he said.

Trucks have to drive further and spend more time looking for passable routes, increasing the cost of maintenance, fuel and in some cases, employee hours. And because the products – mostly meats, cheeses and sea foods – have narrow delivery windows, the specter of spoiled goods is never far.

“Most receivers are not very receptive to delays. They want their product when they want it and there’s not a lot of consideration regarding tight traffic,” Amundson said. “There’s a financial impact that can’t be passed on. The longer it takes you to deliver a product, the more you drive. All of this has a negative impact on the bottom line, which in this industry is very thin.”

Actually, the problem could be worse.

Cynthia Kurtz, president of the San Gabriel Valley Economic Partnerships, a consortium of valley businesses, governments and educational institutions, said that the recent economic woes have reduced the traffic. The recession caused a sharp decline in imports and exports at the ports, easing train traffic.

“We’re still suffering from the loss of 40,000 jobs,” Kurtz said. “And when people aren’t working, they aren’t driving.”

That means the traffic problem will likely get worse if the economy picks up.

So far, more than $1 billion for Alameda Corridor East has come from a combination of federal, state, county, local and railroad funds, but the remaining portion must come entirely from the federal government. And that’s what is causing worries.

“We’ve gone to everyone else about as much as we can, so the next step is up to the feds,” said Rick Richmond, chief executive of the Alameda Corridor-East Construction Authority, a local joint-power authority managing the project.

The Obama administration has made transportation funding a priority, but with the federal deficit at nearly $1.5 trillion, few think transportation will escape the axe.

“There are going to be massive cuts in federal spending across the board, which means that far less money will be passed around,” said Mary Beth Sullivan, executive director of the California Institute for Federal Policy Research, a Washington, D.C.-based think tank that examines the impact of federal policies on California.

In addition, the rail crossing improvements are up against proposals with far higher profiles.

About a year ago, Villaraigosa proposed his 30/10 transit plan, which proposes compressing 30 years of transportation improvements into 10 years. Among the biggest beneficiaries would be the multibillion-dollar extension of the Metro Purple Line to the Westside, the so-called subway to the sea.

As a project that has already been allotted $400 million in county Measure R transportation funds, the Alameda Corridor East was formally included in the 30/10 proposal. However, Paul Hubler, director of government and community relations for the construction authority, said that the rail improvements are not in line to receive any additional funds from 30/10, unlike the Purple Line extension.

Congresswoman Grace Napolitano, D-Santa Fe Springs, who represents portions of the San Gabriel Valley and sits on the House Committee on Transportation and Infrastructure committee, puts the predicament this way.

“The prospect of getting any funding for (at least) the next two years is less than dim,” said Napolitano, even though she views the Alameda Corridor East project as “critical.”

As a result, Richmond said the authority is reviewing the remaining grade crossing to determine their importance and ways to cut costs.

“We are in the home stretch, but finding that money isn’t going to be easy,” he said.