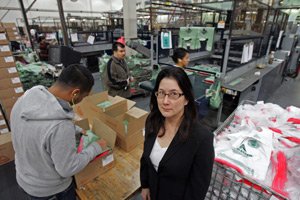 Not only does Gov. Jerry Brown want to eliminate enterprise zones, he wants to kill more than $900 million in tax credits that have been banked by thousands of companies in California – including hundreds in Los Angeles County’s eight enterprise zones.

Among them is Crown Poly Inc., a maker of plastic grocery bags. The company moved from Vernon to an enterprise zone in Huntington Park four years ago; since then, the company has added 110 workers and accumulated more than $900,000 in tax credits. Now that its tax bill may zoom up, Crown Poly has put its hiring plans on hold.

“We specifically located in an enterprise zone so we could hire people and receive the tax credits,” said Crown Poly General Manager Cathy Browne. “We go out and hire people, and we should get the credits that are owed us for hiring those people.”

Browne is worried that the company would have to resort to cost-cutting to deal with the higher tax bill.

Enterprise zones were designed to improve economically struggling areas by giving companies that locate there tax credits of up to $37,000 per worker hired. The companies also would get tax credits for purchasing equipment as part of an expansion.

But in recent years, as the recession took a bite out of companies’ incomes and lowered their tax bills, many of those tax credits have been piling up. That’s because unused tax credits can be banked and used to offset future state tax bills. Many companies were looking forward to using them when the economy recovered and their business improved. Under Brown’s plan, those banked credits would be erased.

“We’ve got 1,100 client companies in California enterprise zones and just about every one of them has credits that haven’t yet been used,” said Rob Babek, partner in charge of the Century City office of Marcum LLP, a New York-based accounting firm. “If these credits are taken away, it could force them to put on hold hiring plans, hire outside the state or even to go into cost-cutting mode.”

One company that may expand facilities outside California if enterprise zones are eliminated is South Gate-based Glasswerks Inc., which makes glass for the construction industry. Glasswerks, which has hired dozens of workers in recent years to bring its South Gate work force to 200, has an estimated $600,000 in accumulated enterprise zone tax credits. The company also has 135 workers at plants in Ohio, Texas and North Carolina.

“If these tax credits are removed, it creates a stumbling block to our continued growth here in California,” said Chief Financial Officer Mike Torres. “We would look to expand our facilities in other states, which have been offering us very similar tax credits.”

Critics have long argued that enterprise zones reward companies that would have expanded regardless; they found ammunition in a 2009 study from the liberal-leaning think tank Public Policy Institute of California. It said employment levels and income growth in enterprise zones were roughly the same as in areas outside the zones.

Also, it’s been alleged that some companies have abused the enterprise zone program by bringing in workers from outside an enterprise zone and falsely claiming they were local residents in order to claim tax credits.

“There’s been a body of research that suggests that enterprise zones have not proven to create the benefits that proponents tout,” Palmer said. “What’s more, they generally end up shifting economic activity from one area of the state to another.”

The governor’s proposal to eliminate the enterprise zones is one part of a reform package he is trying to implement to help ease the state’s $25 billion budget deficit.

Palmer said the governor instead wants to give local governments more autonomy to raise money for enterprise zones or other economic development programs, thereby giving cities and counties more leeway to create their own incentive programs. As part of that, Brown has proposed lowering the voter approval threshold for local taxes and bond measures to fund economic development programs from the current 67 percent to 55 percent.

Since Brown’s proposal to kill enterprise zones is only that – it must be approved by lawmakers as part of a budget package before it would go into effect – business leaders and enterprise zone advocates last week launched a campaign to convince the Legislature to preserve enterprise zones.

They say enterprise zones are one of the few tools that the state has to retain existing businesses and attract business investment. Taking away the program –and wiping out existing tax credits – would send a bad signal to executives.

“If the state has a program that generates tax credits for companies and then the state says it will take those tax credits away, why should a company even stay in California after this?” said Armando Jamjian, a managing partner with the downtown L.A. accounting firm Rivera Jamjian & Dillard LLP and a board member of the California Association of Enterprise Zones.

Jamjian and other enterprise zone advocates are supporting legislation that will be introduced this month in Sacramento that would tighten some of the caps and controls on the program to prevent abuse and free up a little more money for state coffers.

In the meantime, companies in enterprise zones are in limbo.

“We were really counting on that tax break,” said Lorna Sacramento, controller for Vogue Trimmings, an East L.A. manufacturer of belts, handbags and other accessories and a licensee for City of Commerce-based Joe’s Jeans Inc.

Ten years ago, Vogue Trimmings moved from downtown L.A.’s garment district to East Los Angeles in part to be within an enterprise zone. Sacramento said the company has hired about five workers a year and has banked about $100,000 in hiring tax credits. The company had planned to expand its handbag work force this year.

“If the enterprise zone program were ended, we would probably hire fewer people than we would have otherwise,” she said. “What’s more, there would be a penalty for us in the form of higher taxes.”

Business leaders are most upset about the state taking away tax credits that companies already have.

“When the state goes back on its word, then nobody trusts state government, particularly the business community,” said David Fleming, founding chairman of the Los Angeles County Business Federation and an attorney at downtown L.A.’s Latham & Watkins LLP.

“The governor is issuing the wrong message at the wrong time,” Fleming said. We should promote enterprise zones and most certainly make sure Sacramento keeps its word on existing tax write-offs.”

Enterprise Zones At a Glance