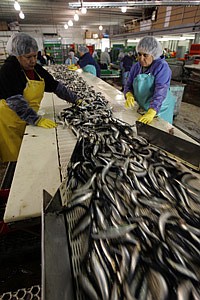 The day begins around 4:30 a.m. when the first boats arrive at dockside processing plants, where apron-clad workers unload, sort and pack the night’s squirming catch.

At midday, dozens of other boats motor in. Many are owned by Vietnamese immigrants who sell such delicacies as slime eel directly to restaurants and brokers. By sunset, most fishermen are back at sea.

All told, about 80 boats do business at this little waterfront corner of the Port of Los Angeles. That may sound sizable, but it’s just a fraction of the 300 vessels that serviced what was once the West Coast’s largest cannery row.

Now, even these survivors feel their days are numbered.

Under pressure to provide more space for containers and other trade-related industries, the Port of Los Angeles is about to embark on a Terminal Island revitalization project that could displace what remains of the historic fishing operation.

“We are now handcuffed. This is the last stand for fishermen,” said Anthony Vuoso, executive vice president of Tri-Marine Fish Co., which ships about 300 tons of frozen sardines, mackerel, squid, bonito and tuna worldwide every day.

One of only four processors still at the port, Tri-Marine is on the verge of signing a five-year lease with the port. But Vuoso is far from pleased.

Tri-Marine had hoped to sign a 20-year lease. That would give it the stability needed to expand its 40,000-square-foot dockside facility with a $2 million cold-storage warehouse. But those plans are no longer financially feasible since the port has refused the 20-year lease.

“Our growth has been capped,” he said.

About 18 months ago, the port issued a planning document suggesting possible future uses for Terminal Island, including Fish Harbor. Among its recommendations were moving the processors and boats to make way for a container terminal.

However, port officials are quick to point out that no decisions have been made and they could further extend Tri-Marine’s lease. Even if it and the other fish operations were forced to move, officials promise a new home would be found for them elsewhere in the port.

“We want to provide more space at other locations,” said port Executive Director Geraldine Knatz. “We’ll be working with the fishermen and processors.”

Still, the fishermen and processors are wary of the port’s intentions, especially given the long, slow decline of a cannery row that once comprised 18 plants and provided jobs for 17,000 workers and 2,000 fishermen.

Fish Harbor was started more than a century ago by Japanese immigrants who caught mostly tuna and, later, sardines. That led to the growth of major canneries including the Van Camp Seafood Co., which marketed Chicken of the Sea, and the giant StarKist, which got its start here.

In the 1950s and ’60s, the operations employed an army of fishermen who cruised up and down the coast as far south as Central America. Then, pounded by foreign competition, soaring labor and fuel costs, government regulations and fluctuating market prices, the industry moved offshore in the 1970s and ’80s, with the last cannery closing in 2001.

Yet the fishing continues. Today, marine animals regularly offloaded in the harbor include albacore, black cod, halibut, crab, lobster, prawn, shrimp, squid, swordfish and shark. The canneries have been replaced by a handful of small fish processing plants including Tri-Marine and its neighbor, Western Fish Co., a few hundred yards down the dock. They don’t can the fish, but each one processes and markets the catch of boats it contracts.

Additionally, dozens of independent fishermen – many of them immigrants from Vietnam – began keeping their boats at the slips in Fish Harbor. Often living aboard the craft and staying at sea for days at a time, the fishermen sell directly to ethnic restaurants or brokers whatever they catch: sea urchins, sea cucumbers and hagfish – commonly known as “slime eel” – seafood that previously had little local appeal.

“The fishing community is the backbone of the area’s culture,” said Dianne Pleschner-Steele, executive director of the California Wetfish Producers Association, a non-profit organization in Buelton representing fishermen.

In 2009, she said, Fish Harbor processors paid fisherman more than $13 million for their catch, but, adjusted for inflation, that was only a fraction of what they were paying at the harbor’s peak.

Wariness on the water

Terry Herzik has witnessed many of the changes at the harbor.

The 64-year-old fisherman has been captain of the 34-foot Sun Star for 35 years. For at least 15 of them, he has been fishing out of Fish Harbor, where he makes twice-weekly trips to the outer Channel Islands for sea urchins and sea cucumber.

The animals are hard to get. He has to anchor the boat, use an air compressor and diving gear, and descend to the ocean bottom to harvest them by hand. However, with Asian demand for them high, he has made a living doing it.

“They are definitely an acquired taste,” says Herzik, whose main customers are small mom-and-pop processors or brokers who sell to Asian restaurants and markets.

Lately, though, the market hasn’t been kind. He goes out to sea about twice a week and grosses less than $6,000 a catch: about 1,000 pounds of sea cucumbers at about $3 a pound and 4,000 pounds of urchins worth about 70 cents a pound. After fuel, repairs and paying his one assistant, his boat is “marginally profitable.”

The reasons, according to Herzik: A long-suffering Japanese economy has led to a one-third decline in the price for urchins even as the cost of maintenance, and especially fuel, rises.

“The demand has decreased so the main market now is domestic,” he said.

Still, Herzik would like to stay at Fish Harbor for another five years before retiring to his home in Brea with his wife.

“This is valuable real estate that I hope we don’t lose. But I think ultimately it will disappear,” he said, sitting on the deck of his boat. “There aren’t many young bloods here. And as we slowly die off they’ll find some other use. I hope the fishing lasts, but I don’t encourage my sons to follow me into it.”

With good reason. After a lull during the recent recession, international trade is again on the rise, which means Fish Harbor may have a future as a cargo terminal. Also, with the Panama Canal expected to complete a $5 billion expansion in 2014 that will likely increase competition from East Coast ports, Los Angeles is under pressure to make more profitable use of its waterfront land.

The port’s internal planning document suggests possible different uses for Terminal Island and Fish Harbor. Among its observations are that the area “provides the greatest opportunity … to expand cargo handling facilities because it is located furthest away from any residential areas.” More specifically, it said the port should “consolidate” and “modernize” commercial fish processing facilities and, if necessary, put them in other locations.

Though the document mentioned no specific locations, port officials said that one potential area for fish processing might be the now-abandoned site of the old Southwest Marine shipyard at the island’s southwest corner. Last week, the Los Angeles City Council sustained a decision by the Harbor Commission denying a Long Beach company’s bid to build a shipyard there.

The fishing operations, port spokesman Phillip Sanfield said, “are part of the history and fabric of the port. We want them there. It’s just a matter of finding them a home in a way that’s strategic.”

Within the next few weeks, the port will start a six- to eight-month planning process that will include a series of public hearings on Terminal Island’s future. The idea is to adopt a plan that the port can begin implementing within three years.

“I’ve encouraged the fishing industry to be part of the planning process,” Knatz said. “We don’t want to discourage coastal fishing.”

People in the fishing industry, however, are skeptical.

Relocating operations, they said, would be exceedingly difficult, especially for a company like Tri-Marine that has invested millions of dollars in infrastructure.

“It takes many years to develop a plant, including going through the permitting process,” Pleschner-Steele said. “How do you re-create that somewhere else?”

The prevailing mood down on the docks is more of resignation than anything else. However, some fishermen are still doing what they can to adapt to changing times.

“This is a hard job,” Bertelli said. “Most guys do it because they love it.”