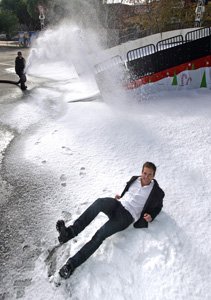 Williams at a MagicSnow job at 10th Street Elementary near downtown L.A. Photo by Ringo Chiu.

Every night during the holiday shopping season at the Grove and Americana at Brand, it snows. That’s right, in snow-free Los Angeles.

It’s fake snow, of course. Fluffy white stuff floats from the sky twice a night for about five minutes at a time to the tunes of “White Christmas” and “Let It Snow.”

Adam Williams, founder and president of West Hollywood MagicSnow Systems, started making it snow at the Grove in the Fairfax district nine years ago. He was there when Glendale’s Americana at Brand, another Caruso Affiliated property, opened five years later, and is now spreading his version of holiday cheer globally, bringing snow to shopping centers in places such as Canada, Germany and, most recently, Brazil.

The ersatz flakes falling from above look like snow, but are neither wet nor icy and vanish before hitting the ground.

“It’s a light, water-based foam that when applied to a high-powered blower, dries out the water and creates a light foam puff that floats through the air,” Williams said.

Fake falling snow has long been MagicSnow’s mainstay, but today, “natural” on-the-ground snow is a growing part of the company’s business, especially with corporate clients. El Segundo’s Mattel Inc. hired MagicSnow to produce more than 190 tons of cold, wet snow – good enough to sled on – to seven elementary schools in underprivileged L.A. neighborhoods this month for the company’s “12 Days of Play” campaign.

MagicSnow also works with companies such as Starbucks and Land Rover to produce snow-laden marketing events. MagicSnow provided the Texas winner of a Weather Channel contest with a “guaranteed white Christmas” last year – the family woke up Dec. 25 and found the front yard covered with manufactured snow and fake flakes falling.

The “natural” snow is made by crushing 300-pound blocks of ice into a fine powder and shooting it out of a high-pressure hose onto the ground.

“It’s not 100 percent the focus of our business, but the demand for it seems like it’s almost just as great as the falling snow,” Williams said. “Because in the end, people want to be able to experience it and touch it and there’s no better way than to have snow falling from the sky and snow on the ground.”

Nearly a decade ago, Williams was a struggling magician who performed at the Magic Castle in Hollywood.

“To be honest, I wasn’t very good,” he said. “My real strength was behind the scenes, and in the creative aspects of entertainment and show business.”

One of the things he did behind the scenes was creating simple snow effects, using a small machine to make the snow. That led him to cold-call a number of local mall operators, including Grove owner Rick Caruso, with his idea to stage a magic show with snow effects for the holiday season. Caruso, however, didn’t want the magic – just the snow.

“I was naïve enough to go directly to the owner to pitch my crazy idea,” Williams said. “And Caruso was generous and smart enough to give me the chance to do it. It really was his idea to make it bigger than what I was proposing.”

Thanks to signing up the Grove, Williams’ business gained recognition and began to grow. Today, the company provides snow to more than 20 major shopping centers and entertainment venues worldwide each year. Williams also signed contracts with Princess Cruises in Santa Clarita to outfit its entire fleet of ships with snow machines, and with General Growth Properties, a Chicago-headquartered shopping center chain, to bring snow to 55 of its nationwide locations.

Most of MagicSnow’s business takes place from October through January, but increased international demand has Williams working harder than ever in summer months, preparing for the seasonal rush. Most employees at MagicSnow are seasonal. About 25 technicians and crew members, who normally work with the film and entertainment industry, join the company when they’re needed. Labor makes up a big portion of the company’s operating costs.

Williams said that revenue has increased by at least 20 percent every year for the past five. The majority of the growth has come from overseas projects.

Williams said MagicSnow has invested more than $1 million over the years in perfecting its technology for its snow machine systems and the composition of the artificial snow. The company plowed money from sales back into snow-making.

“We started the business with nothing, and we haven’t had to reach out to investors or banks for loans,” he said. “A huge amount of the money we brought in was reinvested in the company. It’s all thanks to our clients.”

Williams is the sole proprietor of the company. He has not licensed out the snow technology.

“As much as I would love to do that, right now I want to focus on doing good work,” he said. Kevin Farr, Mattel’s chief financial officer, said that hiring MagicSnow for its charity event cost the company tens of thousands of dollars.

Likewise, Williams said the special effects are a big investment for shopping centers, especially those overseas that also must cover freight costs. But at Caruso Affiliated in Los Angeles, they say it’s worth the price to put shoppers in the holiday mood. After nine years in business, the Grove is still MagicSnow’s biggest, most elaborate snow show.

“Families come and hold hands and hug each other,” said Jennifer Gordon, senior vice president of public relations and special events for Caruso Affiliated. “It’s very magical for the kids and for the families.”

Williams said making snow is not much of a departure from his days of doing magic.

“We’re creating this illusion every night on a really grand scale,” he said. “And I’m able to have an impact on way more people than I ever would have performing as a magician.”