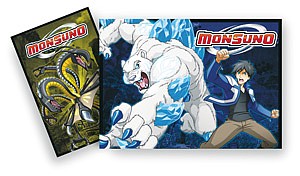 Malibu’s Jakks Pacific Inc. has long had success as a niche toymaker licensing well-loved characters such as Pokemon, SpongeBob SquarePants and Hannah Montana.

Now, the company is more than playing around with a new strategy.

Jakks is developing its first major homegrown entertainment franchise called Monsuno, featuring a group of kids battling evil forces bent on destruction of the Earth. The company is set to launch Monsuno in spring with a Nickelodeon cartoon, trading cards – and, of course, toys. The goal is to make Monsuno a multimillion-dollar worldwide hit.

It’s a major shift for Jakks, which generates the majority of its revenue not only from licensed toys but also established brands purchased from smaller toy companies. While the company has been developing some its own brands, including Girl Gourmet and SpyNet, those haven’t been packaged with a TV show and trading cards.

“They have yet to have one stick and become the next Barbie or Hot Wheels or Nerf, and maybe this could be it,” said Gerrick Johnson, a research analyst at New York financial services firm BMO Capital Markets who follows Jakks.

In preparing to launch Monsuno, the toymaker is not going alone. It has partnered with some high-profile companies: Japanese media conglomerate Dentsu Inc., “American Idol” producer FremantleMedia Enterprises and trading card maker Topps Co. Inc. all made significant investments in Monsuno through a joint venture. Last month, Jakks announced a deal with children’s network Nickelodeon for the worldwide broadcast rights to Monsuno.

“Monsuno could be a game changer,” said Stephen Berman, Jakks co-founder and chief executive, in a phone interview last week from Italy where he’s meeting with the European distributor of Monsuno merchandise.

The company’s Monsuno strategy was dictated by the changing relationship between media and toys.

New lines are designed with a variety of products in mind, not just action figures or dolls, but also movies, cartoons, Internet games and trading cards. Mattel Inc.’s Monster High line and Hasbro Inc.’s Transformers are two such lines.

There’s a reason for that: Today’s kids don’t just play with toys, they see them on the Web, interact with them through social media, and follow them on TV and in the movie theaters, said Chris Byrne, director of content at online toy industry publication Time to Play in New York.

“They are not just picking up pieces of plastic and smacking them together,” Byrne said.

What’s more, toy companies are looking to control a larger portion of the revenue stream.

“For years, companies said we take our piece of the toy business and that’s what we get and it’s OK,” Byrne said. “But there’s a bigger opportunity here to guide the creative process and develop things that can be leveraged into different categories.”

Jakks has been well aware of the evolution for some time, and began looking to develop the next big toy for boys about two years ago. After meeting with independent inventors worldwide, the company acquired a basic concept that it decided to develop into Monsuno.

“We want to control our own intellectual property for the right segments,” Berman said. “When we came across the concept, it was magical and we realized it was the prefect time for us to do what we wanted to do: start with an amazing toy and then create a show behind it.”

A team of Jakks employees spent a year creating a Monsuno story line and characters with the help of Man of Action, an entertainment development firm with offices in Los Angeles and New York that created the Cartoon Network’s popular shows “Ben 10” and “Generator Rex.”

Once the concept was mature, Jakks executives started reaching out to other companies. Dentsu is co-producing the TV show and distributing the program in Asia; London-based Fremantle is handling the remaining worldwide distribution of the show’s ancillary licensing rights; and Topps is co-producing the show and licensing the brand for trading cards, candy and more. Nickelodeon will be showing the cartoon for at least a year.

Jakks is looking at Monsuno as the first long-term effort to grow a substantial business from its properties. Chief Financial Officer Joel Bennett said in a July conference call that the company is planning to double sales of its brands to 40 percent of Jakks’ total business in the next several years.

Indeed, industry analysts said Jakks and other toy companies could run into problems extending their reach beyond dolls and action figures.

“A big risk is spending too much time, energy and money on trying to create this new property,” said BMO’s Johnson. “In some cases, it’s easy to lose sight of your core focus and take resources away from your core mission to create toys.”