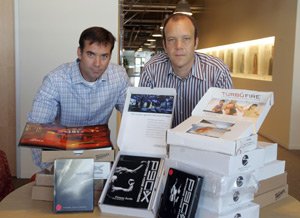 From left, Beachbody’s Squellati and Gelfand with fake products. Photo by Ringo Chiu.

From actress Demi Moore to Congressman Paul Ryan, just about everyone seems to be going crazy for trendy home fitness program P90X these days.

But it has also become wildly popular with a group of people that its maker, Santa Monica’s Beachbody LLC, is not happy about: counterfeiters.

The fast sales of the DVD training program have led to a rise in pirated copies that even come packaged with company brochures and workout scheduling calendars.

It’s no small problem. The company sold $430 million worth of products last year, but estimates that $75 million was lost to counterfeit sales. In response, Beachbody has had to borrow anticounterfeiting measures often used in the apparel and luxury goods industries.

“At first we were naïve and thought we could just scare them off with a few letters,” said Jonathan Gelfand, the company’s general counsel. “We realized it would take a lot more. These people want to steal from us.”

The company has brought in an in-house team of attorneys and staffers, as well as outside investigators in the United States and China, to track the illegal activity. Both groups perform sting operations in which they buy and examine knockoffs for possible civil or criminal action.

The resulting numbers are impressive: Since the beginning of last year, the company has filed 21 U.S. lawsuits, assisted with nearly a dozen criminal investigations, sent nearly 3,000 cease-and-desist letters, and taken down over 1 million online links that either advertised or made pirated material available for download.

In addition, the company sends employees to ports around the country to teach customs inspectors how to spot fakes. It also has hired a team of lobbyists to press legislators in Washington, D.C., for heavier penalties and tighter regulations.

Altogether, the company’s anticounterfeiting budget runs in the millions.

“Considering the company thinks this costs $75 million a year, I’m not tied down on getting what I need,” Gelfand said.

Beachbody’s fight comes as counterfeiting continues to rise and expand outside traditional industries. The growth of China, a major exporter of counterfeit goods, and the rise of online marketplaces that directly sell goods to consumers are two major factors.

The company’s aggressive stance isn’t uncommon among apparel and luxury goods companies, but for the moment, Beachbody stands out within the home fitness industry, said Kris Buckner, owner of Investigative Consultants, a Torrance company that specializes in intellectual property investigations.

“You don’t see too many home fitness businesses being that aggressive,” he said. “I would say they are probably the primary folks on that front.”

Aided by word of mouth and ubiquitous infomercials, Beachbody has sold more than $400 million of its signature P90X product since introducing it in 2005. It accounted for about half of the company’s total sales last year. It has become popular from Hollywood to Washington, where some congressmen have organized P90X workouts.

Despite its “extreme” appellation, the 90-day program doesn’t need much equipment beyond a chin-up bar and exercise bands. And that has been part of the problem.

Unlike home fitness equipment such as Nautilus Inc.’s Bowflex, Beachbody’s programs mostly consist of DVDs while the equipment, such as the exercise bands, can be cheaply acquired from scores of manufacturers.

As a result, even though Beachbody sells P90X kits for $120, counterfeiters can package the DVDs, instructions, a nutrition plan, calendar and the bands for a fraction of the price. (The bars are often not included, since they cost more to ship.)

Many fakes are shipped from China, home to the world’s biggest counterfeiting industry, and resold here. Last year, China was the source of 66 percent, or $124 million, of all counterfeit seizures, according to U.S. Customs. Other pirates are domestic and simply copy and sell only the DVDs.

“I would say about 90 percent originate from China one way or the other,” said David Squellati, the company’s intellectual property counsel. “The other 10 percent comes from people in their garage burning DVDs.”

At the company’s Santa Monica office, piles of fake kits are stacked up in several rooms. Employees spend all day scouring the Internet for counterfeit products advertised on sites such as Amazon, eBay and Craigslist, which have made it exponentially easier to buy and sell counterfeit goods.

Often, price-conscious customers searching for the best deal online can purchase counterfeit goods without even knowing it. Some counterfeiters purchase online advertisements so that their own links appear next to Google search results when customers search for a product.

When Beachbody’s employees spot a possible fake, they buy it and send it to one of several addresses around the country to hide the company’s identity as the purchaser. From there, the merchandise is forwarded to headquarters for examination.

After verifying the products are pirated, the marketplaces are notified to take down the listing. The company has also had several thousand websites shut down by reporting them to their respective Internet service providers or hosts.

The stings can lead to criminal investigations as well. This year, investigative consultant Buckner was hired to perform a sting operation on two alleged counterfeiters. Buckner’s investigators bought allegedly counterfeit P90X DVDs from two men in Los Angeles, and videotaped the exchanges. One told investigators he made $5,000 a month selling the DVDs. The information was forwarded to local authorities who arrested the men, who also allegedly were gang members.

The Los Angeles Police Department did not provide more information about the arrests.

Also this year, an investigator in China hired by the company tracked down counterfeiters to a factory in Shenzhen. After the company tipped off the Chinese government, authorities there raided and shut down the operation. About 50,000 fake Beachbody kits were discovered there. If each one sold for $100, it would total $5 million.

Gelfand cited Nike Inc. and local premium denim maker True Religion Apparel Inc. as companies that are fighting back and which Beachbody models itself after.

“These are companies that aren’t taking a defeatist attitude,” he said.

The number of seizures of counterfeit merchandise by U.S. Customs and Border Protection went up 34 percent last year, and was four times higher than in 2001.

The problem has become so bad that before last year, U.S. Customs officials didn’t even specifically track fake exercise equipment, but now officials say it accounts for 2 percent of all seizures by Customs officers.

As the problem has exploded beyond footwear, apparel and luxury goods makers, businesses have also stepped up their lobbying for stricter regulations and enforcement. Beachbody spent at least $170,000 on federal lobbyists last year.

Currently, anticounterfeiting lobbyists are focusing on trying to pass the Protect IP Act, a bill in Congress that would deny access to “rogue” or “pirate” websites, especially those outside the United States. Beachbody has lobbied for its passage and sent a letter of support.

At least one other home fitness company, Hallandale Beach, Fla.’s Zumba Fitness LLC, began implementing serious anticounterfeiting procedures earlier this year. The company has also set up an in-house team to take down online links, and to pursue civil and criminal action against counterfeiters.