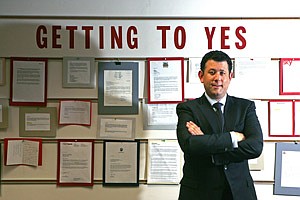 Matt Karatz grew up in France and was the only American kid at school. So he quickly learned what it meant to be the odd person out. When he saw another kid in that position, he felt compassion and reached out.

Matt Karatz will need to draw on this skill now as Los Angeles Mayor Antonio Villaraigosa’s new jobs czar: Villaraigosa last month tapped him to replace Austin Beutner as deputy mayor of the office of economic and business policy.

Beutner, a former private investment executive, left the administration three months ago to consider launching a campaign to replace Villaraigosa as mayor in 2013.

After working in broadcast journalism and real estate – including stints at Westwood-based KB Home and Caruso Affiliated Holdings in Los Angeles – Karatz, 39, is suddenly one of the most powerful people at City Hall and one that the local business community looks to. He will help craft and implement more business-friendly policies.

He also supervises the city’s development and housing agencies, Los Angeles World Airports, the Port of Los Angeles and the Department of Water and Power. One of his tasks is to make these inertia-prone and turf-conscious bureaucracies more responsive to business and development.

For Karatz, it’s a chance to emerge from the shadow of his father, who last year was convicted on charges of backdating stock options while at KB Home. Bruce Karatz received a sentence of five years probation, including eight months of house arrest in which he must wear an electronic monitor. He was also sentenced to 2,000 hours of community service, and has been fulfilling that by working with former gang members at downtown L.A.’s Homeboy Industries.

For the last year, Matt Karatz had been managing director of the mayor’s office of economic and business policy, part of a team of volunteers recruited by Beutner to assist in his business development activities.

In that role, Karatz helped bring new companies to the city, including architectural firm Gensler, which moved to downtown from Santa Monica, and apparel company Lucky Brand Jeans, which moved from Vernon to downtown’s Arts District. He also helped Irving, Texas-based Mission Foods open a manufacturing plant in Panorama City.

The conference room for the economic development office on the 13th floor of City Hall features a board with the legend, “Getting to Yes,” and decorated with letters from businesses and other constituents grateful for the department’s help and can-do attitude.

Karatz has won plaudits from local business leaders who have worked with him over the past year.

“Matt gets it,” said Carol Schatz, chief executive of the Central City Association, which represents business interests, primarily downtown. “He understands the barriers that developers and businesses face and what’s necessary to spur business investment in the city. Most important, he has shown he can implement things, not just talk.”

But Karatz faces a challenge in convincing a skeptical business community that lasting change can be made after years of promises and false starts.

Business interests got their hopes up early last year when Villaraigosa named Beutner his jobs czar. Accomplishments of the office include opening a one-stop permitting office last month at the Department of Building and Safety.

But some business leaders have privately expressed disappointment that Beutner’s attention was forced elsewhere when Villaraigosa called on him to run the DWP. Then, just after he returned to focus full time on his jobs czar duties, Beutner resigned to launch his exploratory campaign for mayor.

Beutner said that while he was focused on the DWP, he delegated some of the economic development work to his volunteer corps, including Karatz.

He also said it would be naïve to assume that Los Angeles could become business-friendly in a year.

“We showed that things could be changed and laid the foundation for change,” he said. “There’s much more left to do, but that first step is often the hardest.”

Karatz said he’d be continuing on that path.

“So much more needs to be done to move the needle so that businesses can regain the confidence to hire and reinvest in our city,” he said during a recent visit to the Business Journal offices.

However, Karatz and the Villaraigosa administration must tread carefully. If they go too far in their efforts to smooth the road for business and development interests, they risk a backlash from homeowner and environmental groups concerned about congestion and overdevelopment.

Karatz lived in France as a boy because his father was running KB Home there; at one point, it was that country’s biggest homebuilder.

He initially decided against following in his father’s footsteps and, after graduating from Pitzer College in Claremont, moved to New York to embark on a journalism career.

He landed a job as a broadcast intern at ABC News. Then, two years later in 1996, he got his big break. It was Mother’s Day and a ValuJet plane had just crashed in the Everglades in Florida. With his regular crew unavailable, Karatz’s boss, investigative correspondent Brian Ross, asked him to fly down to Florida and interview the manager of ValuJet’s maintenance facility.

“I left my mother at the lunch table and went straight to the airport,” he recalled. “I didn’t even have time to get any of my things.”

The interview was the lead story on both the “ABC Nightly News” and “Nightline,” and Karatz’s broadcast career took off. He was promoted to an investigative reporting position on the “20/20” news magazine show, where he received an Emmy Award for a story on campaign finance reform. He also worked on an award-winning expose of CIA activities in Iraq. During that investigation, sources blindfolded Karatz and his news team to take them to secret locations.

“I really enjoyed it. At the time, I was unattached and traveling the world and getting such incredible assignments,” he said.

As he neared 30, Karatz realized that he didn’t want investigative journalism to be a long-term career.

“This was all about uncovering the bad in people and, at bottom, I’m a glass-half-full person. So I decided to transition out of the business,” he said.

Karatz returned to Los Angeles and decided to join his father’s company. “This was something I did completely on my own; my father never persuaded me to do it,” he said.

Bruce Karatz said that his being chairman probably hindered his son’s ability to advance in the company.

“In retrospect, going to work at KB Home slowed down his growth,” he said. “Being the son of the chairman one might think that it’s helpful. In his case, it was hurtful. His abilities were far greater than the responsibilities that he was given. I never directed anyone in our human resources department on what to do with Matt.”

At about this time, the younger Karatz got married. He met his wife, Lindsey, at a dinner party in New York. She now oversees marketing and public relations for her sister’s L.A.-based women’s apparel company. They live in the Benedict Canyon area with their 4-year-old son, Levi.

In 2006, Bruce Karatz resigned as chairman and chief executive amid mounting investigations of the company’s handling of stock options. Matt Karatz left a few months later and took a job working for shopping mall magnate and potential mayoral candidate Rick Caruso. His first responsibility at Caruso Affiliated was selling condominiums that were part of the Americana at Brand project in Glendale.

Unfortunately, Karatz’s timing was off. Within months, the real estate market crashed.

Caruso described Karatz as personable and a “good thinker,” who is able to bring people along with him as he puts forward solutions.

“People like Matt and they want to follow Matt and do what he asks them to do,” Caruso said. “That’s a really strong and important quality, especially at City Hall.”

As the recession dragged on, Karatz’s prospects at Caruso dimmed. In the meantime, his expertise was needed on the home front as his father prepared for trial. So he left Caruso and took over management of Avondale Investments LLC, the Karatz family property portfolio.

Matt Karatz described the next year as a tough time.

“Watching my father go through this was very difficult for me and very, very unfortunate,” he said. “But he never let it show. He was able to gather the troops and think positively. He was responsible for keeping all of us heading in the right direction when we could each have gone off the deep end.”

That applied even on what he called the two worst days in his life: the reading of the guilty verdict in April 2010 and sentencing day seven months later.

As an investigative journalist, he had reveled in exposing secrets the subjects of his stories would rather not become public. Now, the harsh media glare shone on the dealing of his father, whose reputation suffered.

“The publicity was the most challenging part of this whole affair,” he said. “I learned how to grow a thick skin.”

Of that period, Bruce Karatz said one of the most difficult things for him was the concern that his children, wife, family and friends continually expressed for him.

“I had to keep telling them that I was fine, that whatever happened I was going to make it through OK and so would they,” the elder Karatz said.

In the midst of the trial, Matt Karatz received a call from Beutner, who just weeks earlier had joined the Villaraigosa administration as first deputy mayor. Beutner was looking for volunteers (they got a symbolic salary of $1 a year) to help bring focus to City Hall’s efforts to attract and retain businesses, create jobs and grow the economy.

“At first, I said, ‘No, thank you,’” Karatz said. “But then, the more I thought about it and talked it over with my wife and family, the more the offer appealed to me as a way to give back to the community.”

But Karatz had one condition: He had to stay with the family investment business at least through the verdict. Once that happened, in April of last year, Karatz joined Beutner’s team at City Hall, working out of a Spartan office on the 13th floor.

He said the biggest surprise he encountered was that despite good intentions, City Hall just couldn’t make it easier for developers and other businesses to succeed in Los Angeles.

An example of what he calls all the missed opportunities was the failure of the “12-to-2” permit reform program. The number of agencies responsible for approving projects was supposed to be reduced by that ratio. Turf battles and bureaucratic inertia stalled the program for two years and Beutner finally pulled the plug on it last summer in favor of top-to-bottom reform.

Karatz said his top tasks will be to implement further permit reform and garner support for Villaraigosa’s latest initiative to scrap the city’s costly and much despised gross receipts business tax.

Some see him as an untested commodity, and wonder about his youth and the level of support he’ll have at City Hall.

Caruso, who has been critical of City Hall, said that despite his respect for Karatz, the environment might prove to be very difficult.

“He’ll do a good job over there in a very tough situation,” Caruso said. “But he’s part of an administration that’s not had great success in bringing in new business – and now it’s a lame duck administration, too. People get stuck in their ways after so many years in an administration. So the real question is whether Matt can get the backing of the mayor to get meaningful change and the resources to carry it out.”