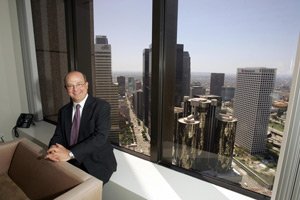 For 35 years, the One Century Plaza building in Century City served as the only base of operations in the L.A. market for Chicago corporate law firm Seyfarth Shaw LLP.

But by 2008, downtown Los Angeles became too important for Seyfarth Shaw to ignore. The area was quickly becoming the center of action for business transaction law, and labor and employment law, the bread-and-butter work for the firm. When it wanted to find additional attorneys with experience in these areas, Seyfarth Shaw had to look at other downtown law firms.

“We found that as we had conversations to attract corporate and real estate lawyers, they were downtown more often than not,” said Raymond Kepner, one of two managing partners in Seyfarth Shaw’s downtown office.

Indeed, in 2008, the company did recruit several attorneys from another firm in downtown. Most of them lived in communities closer to the area, such as Pasadena and Los Feliz, and joined up once they received a promise that Seyfarth Shaw would set up shop in downtown.

“These attorneys were not willing to go to Century City; that’s just too hard to get to with all the congestion on the Westside,” Kepner said.

But there were other reasons for Seyfarth Shaw to consider opening a downtown office. With all the new development, and entertainment and cultural attractions there, it was becoming a more attractive place to work and for employees to live.

“There was a renewed vibrancy to the downtown business community, and to the level of energy and activity downtown,” Kepner said.

In addition, many of Seyfarth Shaw’s clients in the financial services industry are also based downtown.

So, in early 2009, the firm signed a lease for 55,000 square feet on the 38th and 39th floors at 333 S. Hope St., the Bank of America Plaza building owned by Brookfield Properties Management LLC. The space had been occupied by another law firm, San Francisco-based Heller Ehrman, which dissolved in October 2008.

The deal, financial terms of which were not disclosed, came as a welcome relief for Brookfield, which had some understandable concerns about marketing the space amid the biggest economic meltdown since the Depression. The space ended up being vacant less than six months, however.

“It was a situation that could have been very bad for us,” said John Barganski, Brookfield vice president for leasing in Southern California. “But with this deal, we were able to mitigate our losses, so it was very welcome, indeed.”

Seyfarth Shaw now has 36 attorneys in the downtown office as well as dozens of support staff. Kepner said several of the younger associates have chosen to live downtown, some just a few blocks from the office.

He said this is one major change he has seen since he last worked downtown as an attorney in another firm in the 1990s. “Back then, the housing options just weren’t there and downtown just wasn’t an attractive place for younger associates,” Kepner said.

What’s more, he added, some young associates, paralegals and office support staff have jumped at the opportunity to take mass transit.

Another advantage: the downtown office has become what Kepner described as a base camp for litigation attorneys from both offices during trials at nearby courthouses.

“The litigators from our Century City office especially welcome this, because it means they don’t have to fight traffic to get back to their offices,” he said.

Even parking costs, which can approach $40 an hour downtown, have not proved much of an obstacle. Kepner said rates are only slightly higher downtown than in Century City, and they haven’t deterred clients from attending breakfast seminars or other events at the downtown office.

“Overall, we’ve been very pleased with our decision to open a downtown office,” he said.

But unlike other firms that have recently consolidated two offices into their downtown quarters, Kepner said Seyfarth Shaw has no intention of closing its Century City office, which has grown in recent years to 90 lawyers.

Attorneys: 36 attorneys in downtown Los Angeles, 90 in Century City and more than 750 firmwide.