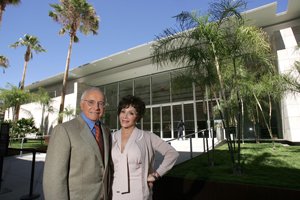 Stewart and Lynda Resnick at the Resnick Exhibition Pavilion at LACMA. Photo by Ringo Chiu.

As Lynda Resnick led the way through the newest building at the Los Angeles County Museum of Art’s campus last week, she stopped to admire how the light played on her iconic portrait of Marie Antoinette. She hugged and joked with LACMA staff as they walked by.

Resnick and her husband, Stewart, appeared relaxed as they strolled through the Lynda and Stewart Resnick Exhibition Pavilion. That may seem unexpected considering the historic moment: When the building opens Oct. 2, the Beverly Hills couple will join L.A.’s small pantheon of art patrons whose donations are so generous they have a museum building named for them.

The arrival at this vaunted place has not always been easy. Lynda Resnick’s 18-year tenure on the museum’s board has been marked in recent years by a few tensions, notably with L.A.’s other major contemporary arts patron, Eli Broad. And, she said, she was a bit press shy in the past, and generally uncomfortable with the public recognition and demands that big philanthropic gestures tend to generate.

No more. “I’m going with the flow,” she declared.

“It’s been a happy time,” Resnick told the Business Journal. “The museum has had it ups and downs, and I’ve ridden those waves with the rest of the board. And who we are today is the best we’ve ever been in my tenure.”

Although the Resnicks already are known in L.A.’s top business circles and among arts patrons, they will certainly become much better known generally in the city now.

“There are really a few philanthropic people who support the arts,” said Jane Nathanson, wife of billionaire Marc Nathanson, and a longtime friend of Lynda Resnick and fellow LACMA board member. “They are definitely two of the key people in the city.”

The Resnicks are set to be honored Saturday with a private preopening gala at the museum organized by their closest friends, a who’s who of Los Angeles that includes event organizer Jane Nathanson, philanthropist Michael Milken, media mogul David Geffen and former Yahoo Chairman Terry Semel.

Ticket sales have raised about $5 million, which will go toward LACMA exhibitions. About 1,000 guests will enjoy a cocktail reception and a performance by pop superstar Christina Aguilera (an arrangement made by Lynda Resnick’s friend, Shelli Azoff, the wife of Irving Azoff, chairman of Live Nation Entertainment).

The Resnicks donated $45 million for the construction of the 45,000-square-foot pavilion, and have pledged $10 million of their art, for a total $55 million. Their gift, and the naming rights it confers, places them in exclusive company: At LACMA, individual buildings are named after Broad, Armand Hammer and Robert Ahmanson.

And, of course, Los Angeles is where several arts patrons established their own self-named museums, including J. Paul Getty, Norton Simon and Hammer. Eli and Edythe Broad are moving forward on the creation of a self-named museum on Grand Avenue in downtown Los Angeles.

Eli Broad has been closely associated with the L.A. art world in general and LACMA, in particular, where he has served on the board for 13 years. He hasn’t been as press shy as the Resnicks have been, and with the opening of the Resnick Pavilion, he’ll have some company in the spotlight.

“Everything Eli is involved in, there’s a lot of press around that. It’s the nature of Eli Broad. He’s a big figure in general,” said Michael Govan, chief executive at LACMA. “I don’t think the Resnicks seek that out. But I think they will receive a lot of attention, and I hope they receive appreciation.”

Broad, who has long said he wants his high profile to encourage other wealthy Angelenos to donate big bucks to their pet projects, was out of the country and unavailable for comment for this article. However, he plans to be back in town to attend Friday’s preopening party.

Of course, Broad’s involvement with the L.A. art scene isn’t limited to LACMA. He invested $30 million to keep downtown L.A.’s Museum of Contemporary Art from collapsing in 2008 due to a dwindling endowment and overspending on big shows.

Also, Broad announced in August that he’s going to build the Broad Collection museum, a 120,000-square-foot building at a cost of up to $100 million, across the street from MOCA on Grand. The downtown museum will house the Broads’ extensive contemporary art holdings.

LACMA, MOCA and the Broad Collection will likely be competing for board members among L.A.’s limited pool of arts patrons.

“Historically, there hasn’t been that much involvement between a lot of the money communities in Southern California and the museums,” said Robin Cembalest, executive editor of New York-based art magazine Artnews. “That’s changing now. I think it wouldn’t be surprising to see heightened competition between the museums in Los Angeles for local collectors, celebrities, entrepreneurs and others who might be valuable players on a museum board.”

Lynda Resnick began collecting art at 18, when she purchased a piece by American artist and illustrator Howard Chandler Christy for $125 – and paid for it in monthly installments.

The Business Journal estimated the Resnicks’ wealth at $1.79 billion in May. That put them at No. 22 on the newspaper’s list of Wealthiest Angelenos.

But as their business interests became more successful, the Resnicks joined L.A.’s leading art collectors: Stewart Resnick acknowledged that his wife is the driving force in this area. An Old Masters enthusiast, she sought counsel from experts early on, turned to LACMA and was impressed.

“I knew I needed great advice, especially when buying Old Masters,” Lynda Resnick said. “You need an art historian to collect efficiently. And I know a lot about art, but I wanted a lot of support.”

As a result, she decided to dedicate much of her time to LACMA. She joined the board, became head of the museum’s acquisition committee and is now vice chairwoman. She also took a leadership role in fundraising. In recent years, the Resnicks pledged financial help in LACMA’s ongoing transformation. Govan suggested they think bigger.

“Michael asked us to double our pledge and do the exhibition hall,” Lynda Resnick said. “And when he heard his vision, we decided it would be a better use of the funds.”

Plans for the Resnick Pavilion were announced in 2008.

Resnick calls Govan a philosopher with a deep understanding of art and its place in society. The admiration is mutual. Govan said it’s rare for a museum to have supporters such as the Resnicks.

“You often find collectors who specialize and then focus their gift specifically on one particular area,” Govan said. “In part, what is special about them is their broad view and their interest in the whole program.”

Nathanson agrees, saying Lynda Resnick appreciates a wide range of art in addition to her primary area of interest.

“She’s really become extremely knowledgeable about many different areas of art,” Nathanson said. “Her collection is 17th and 18th century, but I think she also appreciates contemporary art and Renaissance art and impressionistic art and Asian art and certainly loves furniture.”

The pavilion is a key feature of LACMA’s upgrade. The revamping of the campus was announced in 2005, the year before Govan was hired to implement it, and began with the construction of the Broad Contemporary Art Museum and the BP Grand Entrance.

The Broad building, called BCAM and which opened in early 2008, became controversial when the philanthropist announced he wouldn’t donate his collection to LACMA – he had never promised to do so, although it had been widely expected. Instead, Broad said he would loan his works for display at the museum.

The first floor of BCAM is taken up by massive walls by Richard Serra, the second is LACMA exhibit space and the third features works on loan from Broad. BCAM now displays fewer of Broad’s pieces than it did a couple of years ago.

Lynda Resnick was quoted in the New York Times in February saying Broad owes LACMA “a fortune” – a balance on his pledge for BCAM. Broad said he fulfilled his gift to LACMA “100-plus percent,” but other board members confirmed Resnick’s view, according to that article.

Also, she told Vanity Fair magazine that during the process of hiring Govan, she stepped down from the search committee because she couldn’t work with Broad.

Resnick didn’t want to discuss any conflicts she has had with Broad for this article.

“We’ve been through our difficult times,” she acknowledged. “I don’t even like to think about it.”

Rather, Resnick is focused on the pavilion, which like BCAM was designed by Renzo Piano – the travertine walls of the buildings were mined from the same quarry. (Perhaps ironically, the two buildings – one named for Broad, the other for the Resnicks – sit beside each other and work as complements.)

Resnick refers to her role at LACMA as a second job, but said she wasn’t involved in the design or construction of the building.

“It’s Michael’s vision,” she said. “He showed me things along the way. But when it comes to architecture and design, Michael is a genius. And I have felt and I have seen donors micromanage the process, and I know in the end that it isn’t as good as if you let the visionary have their way.”

Govan’s idea behind the pavilion was to create a space that reflects the wide range of the encyclopedic museum’s collection, in addition to displaying works on loan. For example, the three inaugural exhibits will showcase giant pre-Columbian stone heads from Mexico; a collection of European garments; and 125 pieces from the Resnicks’ private collection of European sculptures, decorative arts, art deco furniture and various paintings, including the portrait of Marie Antoinette.

“You realize how much you’ve collected over the years,” Stewart Resnick said.

And even though Resnick said he and his wife are still collecting, they have no plans to build a museum of their own – as Simon and Hammer did, and as Broad will do in downtown.

“That would be a folly,” Lynda Resnick said. “My ego doesn’t extend to that.”