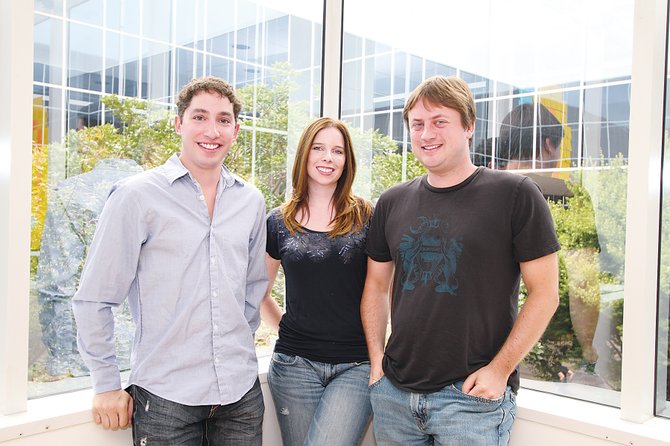 A new chief executive has landed at Meteor Games.

“Zac has the skills that Adam and I lack to scale the company,” said Donna Powell, Adam Powell’s wife and co-founder. “We’re more creative based.”

Meteor designs and develops games for social networking websites such as Facebook. Games include Island Paradise, where users raise animals and grow crops on a tropical island, and Little Rock Pool, where the objective is to care for marine animals.

Brandenberg, who has been an investor in the company since 2008, joined Meteor on July 1, less than two weeks after selling Hydra to Kansas City, Mo., advertising company Adknowledge for an undisclosed sum. Meteor announced the appointment last month.

Brandenberg grew Hydra to $108 million in revenue by 2008. He said he’ll be able to draw upon his experience growing Hydra from startup to success for Meteor, which now has 50 employees.

Meteor has until now specialized in social networking games with simple plots, such as Island Paradise. Now, the company wants to create games with more complex story narratives and characters.

“We want to take current games and give them a new twist,” Brandenberg said.

The Powells, the team behind the early social-game hit NeoPets, had attempted to launch a more complex game called Vikings, Pirates, Ninjas in 2007, hoping to appeal to video gamers. But the game didn’t draw big numbers. Island Paradise, launched in 2009, now has more than 7 million users.

Donna Powell, the company’s president, said the Vikings game didn’t take off because Facebook hadn’t exploded yet and its users weren’t interested in playing games at the time.

But last year, social gaming got a boost when San Francisco-based Zynga launched FarmVille on Facebook. The game, which asks users to plant and harvest virtual crops, reached 61 million users by this June.

Powell said FarmVille has made Facebook users more aware of social games and more likely to try complex, plot-driven games in the future.

Ebyline, which launched publicly last week, acts as a marketplace for freelancers looking for editors to publish their work or for newspapers searching for publications to syndicate their articles.

Bill Momary and Allen Narcisse got the idea when working for the Times in 2005, Momary in advertising and Narcisse in product management. They founded Ebyline in Santa Clarita in 2009.

“We saw what was happening to news content. Most news organizations were shrinking their staff because of economic changes,” said Narcisse, the company’s chief operating officer. “We focused on how to help news organizations maintain good content and tap into resources outside their building.”

The website has three main functions. It vets freelancers, and lets them pitch and sell stories to publications through the site; lets publications look for freelance content to buy; and allows newspapers to syndicate their stories to other publications. When a story is sold, Ebyline takes an 8 percent cut from the sale.

Variety has announced that it will use Ebyline to sell film reviews and stories, the first time the publication is syndicating its content. Other publishers who plan to use the site include Texas Observer, an Austin, Texas-based newspaper, and New York-based non-profit news website ProPublica.

Ebyline also has the support of several established L.A. newspapermen. Jeffrey Johnson, former publisher of the Times, and Leo Wolinsky, editor of Variety, have seats on the company’s board.

“If we find publishers who have a high demand, they’ll bring the freelancers with them,” he said.

Webalo Inc., an L.A. company that develops tools for creating mobile phone applications, announced last week that it had raised $3 million in a funding round.

The round was led by J.L. Easton Ventures and Balch Hill Capital.

Webalo, which was founded in 2000 by Peter Price and Seth Bruder, claims to simplify mobile application development by eliminating coding and wait time, and reducing cost. The company’s technology works on a variety of platforms, including the iPhone, BlackBerry and Android.