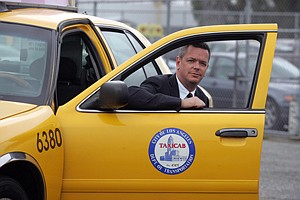 With all of the taxi franchises in Los Angeles set to expire at the end of the year, a group of taxi drivers with support from labor unions has gotten into a battle with cab companies over the future of taxi operations in the city.

The nine taxi franchise holders are pushing for five-year renewals, which they say will give cab owners the financial security to upgrade their vehicles to green cars such as hybrids.

But a group of taxi drivers wants a renewal of only one year to 18 months. During that time, the drivers want a city study of working conditions, which they claim involve long hours for low pay. They also want the city to pass a “bill of rights” that would allow drivers to affiliate with any of the taxi franchise operations in the city.

That is raising concern among taxi companies that drivers may be headed toward a union-organizing effort, especially since a group that represents many drivers, the Los Angeles Taxi Workers Alliance, has enlisted the aid of several powerful labor groups.

The conflict may come to a head next month before the Los Angeles City Council, which must decide how long to renew the franchises and whether to order a study of working conditions in the industry.

The franchises were revamped in 2000, and have been rolled over in an automatic renewal process since then. The franchises are worth an estimated $180 million in annual fare revenue from the 2,303 licensed taxis operating in the city of Los Angeles. About 3,500 drivers make an estimated 7 million trips with their taxis each year. The city’s take is about $4.5 million a year in franchise and related fees.

One-third of the drivers own their cabs; two-thirds lease cab time when the owners aren’t behind the wheel.

The companies operate as co-ops; each cab owner has a share in the company, which they pay for with an annual fee for permits and access to company dispatchers.

The taxi companies say the drivers’ allegations of low wages and poor working conditions are untrue.

“We’re hoping the city does the right thing and makes policy decisions based on facts, not fiction,” said William Rouse, general manager for L.A. Yellow Cab Co. and United Checker Cab Co., both of which hold L.A. city taxi franchises that allow them to dispatch calls to drivers.

The taxi companies also argue that they need five-year renewals to allow cab owners to buy low-emission vehicles such as hybrids and compressed natural gas-fueled vehicles. The city franchises are expected to require 80 percent of a company’s fleet to be “green” in five years. A shorter renewal period would not allow taxi owners enough time to recover the costs of buying them. If too few cab owners buy clean vehicles, the companies could lose their franchises.

“We cannot phase in the purchase of up to 200 hybrid vehicles in less than five years,” said Michael Calin, general manager of Hawthorne-based Bell Cab Co.

The Taxi Workers Alliance points to a 2006 UCLA study that said the average wage for taxi drivers was $8.39 an hour – usually without health benefits – and that they spend 12 hours a day, six days a week fighting L.A.’s notoriously congested streets.

Taxi companies dispute the study, saying that no owner-operator of a taxi would enter the business and buy their own vehicle to make $8.39 an hour.

Above all, drivers want the freedom to quit a franchised company if they feel they’re not being treated fairly. They do not have that freedom under the current system, which locks them into a company through the permit. The city permits are issued to the companies, and the drivers want the city to issue the permits directly to them.

“We have an exploitive and corrupt system that has been likened to modern-day sharecropping,” said Hamid Khan, a former taxi driver and founding member of the Taxi Workers Alliance who now works for a community organizing group called South Asian Network.

The alliance is pushing the city to hire a consultant to study the current taxi system and come up with ways to improve working conditions for drivers.

To help push its case at City Hall, the Taxi Workers Alliance has sought help from the Los Angeles County Federation of Labor, the Service Employees International Union Local 1877, the United Steelworkers Union and the Clean Carwash Campaign. It also solicited letters from several environmental groups, including the L.A. chapter of the Natural Resources Defense Council.

Khan said this is not a prelude to an official organizing effort, but rather an attempt to bring pressure to bear on city officials to come up with a “bill of rights” that would offer protections to taxi drivers.

“We’re asking for a taxi workers’ bill of rights, including the freedom of association without retaliation,” he said.

This bill of rights would also include guarantees that drivers would be paid higher wages and benefits, though Khan would not say how that would be accomplished.

One union leader who has lent his voice to the taxi workers’ effort said that although this was not a formal organizing effort, it does bear similarities to one.

“They are trying to harness as much collective power and support as they can so they can move progressive change,” said Mike Garcia, president of SEIU Local 1877. “While not a formal union, they are acting like one. And we have historically supported low-wage worker movements.”

Garcia said that if the Taxi Workers Alliance is successful, “that’s more power all of us have to fight back against low wages and lack of health care benefits and exploitation that happens in a city like this with the largest underground economy and the largest pool of immigrant workers.”

But he denied that any formal union organizing effort is under way.

“We’re not planning any role in an organizing effort of taxi workers,” he said. “They have asked us for help; our union has clout at City Council. They also asked us to garner support from other unions. We told them yes.”

Labor unions often lend their name to efforts of workers to improve working conditions in their industry, even if the unions had no plans to organize those specific workers, according to Kent Wong, director of the UCLA Center for Labor Research and Education.

“The taxi drivers association has been trying to raise the wage floor and upgrade the standards,” Wong said. “There are many worker associations that share many of the same goals and aspirations of unions, even if their industries are not particularly conducive to union organizing.”

Wong said that the nature of the local taxi industry, with drivers who are predominantly independent contractors, makes it difficult to unionize. But he said such union organizing efforts are not unprecedented: Ten years ago, home health-care workers who had been independent contractors organized into a union.

But to the taxi franchise companies and their allies, the involvement of SEIU and other unions represents a full-fledged organizing effort.

“When we went through the franchise renewal process in 2000, we put all sorts of performance evaluations and grading in place that have served the public well,” he said.

He also added that any significant boost in wages paid to taxi drivers would be passed on to taxi customers in the form of higher fares.

“We already have the second highest taxi fares of any major city in the nation,” he said. “If you raise the fares further, senior citizens and other taxi-dependent residents will be hurt the most.”

City Councilman Bill Rosendahl, who leads the council’s transportation committee, said he was still talking to the various parties about the franchise renewal options and that he hadn’t yet come to a decision.

“From my discussions with city staff, they seem satisfied with how the cab companies have handled their franchises,” Rosendahl said. “Given that, I’m trying to understand the drivers’ issues better.”

But Rosendahl added that he was excited about the prospect of converting the taxi fleet to hybrid or alternative fuel vehicles.