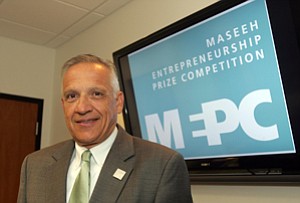 So Maseeh, a wealthy Newport Beach engineer, this week will announce a $1 million donation to fund the Maseeh Entrepreneurship Prize Competition at the USC Viterbi School of Engineering, where Yortsos is dean.

Yortsos wants students to tackle the Grand Challenges, which is a list developed by the National Academy of Engineering in Washington, D.C., to highlight engineering projects that would provide the biggest benefit to society. They range from practical problems such as making solar energy financially viable to the incredibly complex, such as reverse engineering the human brain.

“The solutions to the Grand Challenges will be transformative,” Yortsos said. “Fariborz is making a statement of faith that engineering technology is behind every innovation.”

Maseeh said he selected the Viterbi school for the award because of its strong management. He believes the current curriculum in engineering at many U.S. universities doesn’t prepare graduates to succeed as entrepreneurs, and he hopes the program will fill out their education.

“Engineers are taught to solve problems, but not to implement those solutions into businesses,” he said. “The idea of this prize is to train students more about business and competition in a professional way.”

A class will cover business plans, and an outside adviser or mentor will be assigned to each team to make sure the final plan is realistic. Then a panel of judges will choose each year’s winning team, which will receive $50,000 to develop their idea to the point where it can attract angel investors or venture capital.

Yortsos said the competition reflects the changes afoot in the engineering profession and the larger U.S. economy. For example, as auto manufacturing has moved overseas in the last 30 years, so have many related engineering jobs. He sees many of what he calls “routine engineering jobs” eventually going to foreign countries, so U.S.-based engineers need to become inventors or entrepreneurs.

Looking at the resources at USC and in the surrounding economy, Yortsos sees several of the Grand Challenges as prime targets for local solutions. Solar energy ranks high on his list, thanks to a special center at Viterbi funded by the U.S. Energy Department. The school’s strong computer science courses feed into the challenges of securing cyberspace and advancing health information technology. Enhancing virtual reality ties into the region’s entertainment industry, and could also be used for combat simulation and medical training.

“Enhancing virtual reality is all about video games and Hollywood, so there are a lot of resources out there,” he said.

Calvin Mackie, a former associate professor of engineering at Tulane University and now president of Channel Zero, a motivational and education consultancy in New Orleans, said the young engineers who go through Maseeh’s competition will still face a steep learning curve.

“There’s a big difference between getting the work and doing the work,” Mackie said. “Engineers are trained to do the work. There are a lot of personal skills that need to be developed that a lot of engineers don’t have.”

Among the ones that engineers typically lack, he said, are public speaking and explaining technology to non-engineers. Many startup companies need government contracts or research grants, meaning that engineers will have to interact with politicians and public officials. Also, hiring and developing the right people requires interviewing and motivating skills.

Would-be entrepreneurs in the program will face their first selling challenge when they search for investors.

“Engineers can write business plans, working with spreadsheets and sitting at a desk, but getting up in front of a room of funders and convincing them, that’s the real test,” Mackie said.

To properly prepare students, he suggested they bring in outside advisers who can “balance the practical with the technical” during the planning and startup phases.

The Orange County Business Journal estimates Maseeh’s wealth at $375 million. He made his fortune by pioneering the production of small machines, called micro-electrical mechanical systems, and he hopes the program at Viterbi will encourage similar success for other entrepreneurs in Southern California.

Maseeh modeled the Viterbi program on a schoolwide competition at MIT, where he got his doctorate. The contest there has produced hundreds of companies, organizations or viable technologies, most of which remained in Massachusetts. He expects the same results here.

“If some of these business plans result in companies, we know statistically that most will stay in California,” he said. “A lot of prosperity comes through innovation and we hope to be a part of that here.”

After the program is launched, the students will form teams and match with advisers. The first classes will be in the winter semester. Yortsos and Maseeh expect to award the first prize in April or May.

Maseeh, who started his first company at 21, said he would have loved to go through a program like this one.

“I learned a lot by trial and error,” he said. “From experience, I know that mentors who can help you brainstorm are invaluable.”