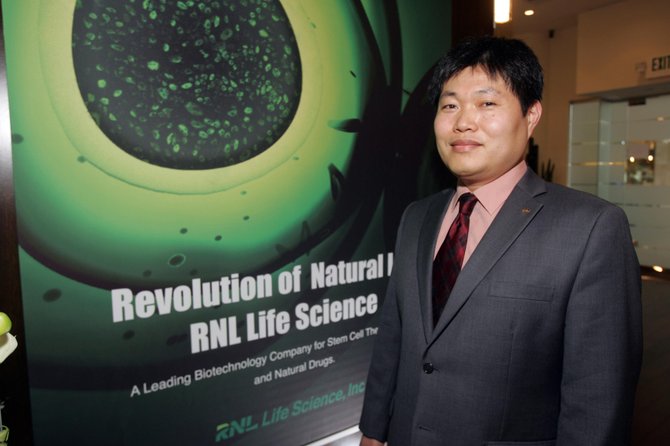 Patients seeking one of the most complicated and experimental therapies in medicine have been descending not on UCLA or Cedars-Sinai but on a small corner storefront in the Koreatown Galleria.

There, upstairs from a grocery and alongside stores selling handbags and Hello Kitty dolls, sufferers of arthritis, Parkinson’s, Alzheimer’s and other hard-to-treat diseases have been seeking relief.

In this most unlikely place, one of the world’s largest stem cell clinics, a South Korean company called RNL Bio Co. Ltd., has established its American headquarters. Looking to attract a foothold in the U.S. market, it is tapping into L.A.’s sizable Korean community – even as two patient deaths in Asia have incited criticism of the company back home.

Stem cells are so-called precursor cells with the ability to turn into other types of cells, and because of that they can regenerate tissues – and are considered one of medicine’s most promising sources of new therapies. But most treatments in the United States are experimental, or at best in clinical trials, with only a few approved uses, such as bone marrow transplants.

Still, increasing numbers of desperate patients are traveling to countries with fewer regulations for more experimental treatments – a trend RNL has seized upon.

“FDA approval will take years, and so many people who are suffering from degenerative diseases or the aging process cannot wait,” said Jin Han Hong, president of U.S. subsidiary RNL Life Science Inc. “I’m not trying to take advantage of desperate patients, but if the patient wants to go to another country to receive stem cells, which is not available in the United States, then that is just one option.”

RNL is one of a growing number of foreign companies, including Germany’s XCell-Center and China’s Beike Biotechnology, that U.S. patients are visiting for stem cell treatments. However, experts said that RNL is apparently the first with an L.A. office.

Since opening in March, that office has sent about 120 patients for treatment overseas. More than 90 percent of them are Korean. Patients pay between $10,000 and $30,000 to have their adult stem cells – which can be found in fat – extracted through liposuction by a local doctor, sent to the company’s Maryland laboratory for processing, shipped to Korea to be multiplied, and then injected back into their bodies in RNL’s partner facilities in China, Japan or even Tijuana.

By using a person’s own adult stem cells, the process avoids the ethical issues raised by embryonic stem cells, which can require the destruction of human embryos.

But the company faces a number of hurdles. RNL has yet to begin the process of seeking Food and Drug Administration approval to perform injections in the United States. The company also remains virtually unknown to most.

Most importantly, critics warn that stem cell injections have not been proved to be effective or even safe. The issue was highlighted this month when it was revealed that two RNL patients died after stem cell injections, though the company vigorously maintains the two died of unrelated heart problems.

Larry Goldstein, director of UC San Diego’s stem cell program and a board member of the International Society for Stem Cell Research, cautioned against unapproved medical uses of stem cells.

“Anybody can go on a street corner and declare they have a cure for anything,” he said. “Sometimes you find out there are dangers to patients that you didn’t anticipate, which emphasizes why it’s so important to do careful clinical experimentation before selling it to large numbers of people.”

Few of the 100 or so stem cell clinics estimated to be operating around the world apparently are on the scale of RNL, which claims to have treated more than 10,000 patients, far more than any competitor. It has found success skirting Korea’s ban on stem cell injections by partnering with clinics in China and Japan.

The company is publicly traded on the Korea Stock Exchange and reported around $42 million in revenue last year. It also reported a small operating profit but a net loss of $16 million for the same period. However, the company remains relatively unknown in the United States.

“I don’t think anybody’s come close to doing 10,000 patients,” said Zannos Grekos, founder and program director of Bonita Springs, Fla.-based Regenocyte Therapeutic LLC, which brings patients to the Dominican Republic for stem cell injections. “That’s huge if they have. But why don’t we know about them?”

RNL is trying to change that by establishing a U.S. presence. It invested $6 million to open a research and development facility in Germantown, Md., in 2008. But it’s in Los Angeles that the company chose to put its U.S. headquarters because of the large Korean community.

Because the treatments are so expensive, the company is specific about to whom it markets. The majority of patients are wealthy and in their 60s and 70s; the most popular treatment is for aging. Sales reps are encouraged to find potential patients they may know personally. Some patients can receive a commission as consultants if they refer others.

Apart from overseas injections, RNL offers several other services and products in Los Angeles. It also provides for $7,500 stem cell “banking,” a fairly common service offered by various companies. The idea is to extract and save stem cells in case they are needed to treat some disease in the future.

RNL also sells a line of stem cell cosmetics ranging from $79 for a bottle of hand cream to $1,220 for a 28-vial set of skin treatments. The cosmetics don’t contain actual stem cells but proteins excreted by adult stem cells when cultured, and are supposed to regenerate and rejuvenate skin. Cosmetics sales have totaled less than $20,000 per quarter in the United States.

The office also has referred clients to its parent company for another service that has made headlines: pet cloning. In 2008, RNL delivered the first commercial dog clone to a California woman. About 10 U.S. clients have each paid $100,000 or so for the service, Hong said, but the bulk of the company’s business continues to be stem cell therapeutics.

At least one person who is a believer in the treatment is 19-year-old Chloe Sohl. She began losing some of her hearing due to an autoimmune disease in 2006, and in a three-week period in 2008, her hearing went from 75 percent in one ear and 100 percent in the other to 0 percent and 3 percent, respectively. Steroids, chemotherapy and other drugs didn’t help.

She was considering cochlear implants as a last-ditch solution when her father, Bertram Sohl, a physician and director of the obstetrical clinic at St. Mary Medical Center in Long Beach, had a chance meeting with doctors from RNL, who offered to sponsor stem cell injections for Chloe Sohl on an experimental basis.

Despite concerns about safety and doubts that it would work, the family decided to go ahead with the procedure.

First, a local doctor extracted 5 grams of fat from her body. RNL has a network of about a dozen doctors in the L.A. area who can perform the procedure. The sample was shipped for processing to RNL’s Maryland facility, where her adult stem cells were isolated. The cells were then shipped in liquid nitrogen tanks to Korea, where they were grown in cultures and multiplied over a two-month period. Finally, in July of last year, she traveled to Japan for a series of three injections – an IV infusion as well as injections into her ears – of about 200 million stem cells each.

Last November, her hearing began to return. Today, it’s close to 100 percent in both ears, and she credits the stem cells for it – even though there was another drug, rheumatoid arthritis treatment Humira, in her system about the same time.

Her father believes she wouldn’t be hearing today were it not for the treatment. But he said that stem cells are not a cure-all.

“When people ask if we recommend it to them, it’s hard to know what to say,” Bertram Sohl said. “All I can say about my daughter is that it’s experimental and we’re happy we did it because it cured her and for us it’s a miracle. But most of the studies that have been done have been done to animals, and moving it from animal treatment to humans is much more complicated.”

Despite the success stories, the deaths of two elderly RNL patients after stem cell injections have fueled critics in Korea. One of the patients, a 73-year-old man, died of a pulmonary embolism at one of RNL’s partner facilities in Kyoto, Japan. The other died of complications from a heart condition in a hospital in Korea, two months after receiving injections in China. In addition, a third patient claimed he developed cancer in his neck within weeks of receiving treatments in China. The International Cellular Medicine Society, an organization of physicians and researchers supporting stem cell therapies, has opened an investigation into the deaths.

RNL has said it is not responsible. According to Hong, the man who died in Japan had heart surgery just two weeks before receiving injections but did not disclose his medical history to the company. In addition, he said, complications from a heart condition in the second death were unrelated to stem cell injections given months earlier. As for the patient who claimed he got cancer, Hong said it was impossible to have developed cancer within weeks of an injection.

But there are even more fundamental doubts.

“The notion that one kind of cell or treatment will work for many different types of diseases does seem very hard to believe,” said stem cell expert Goldstein. “That would be like saying one drug treats all kinds of diseases that are very different from each other. Stem cells are not magical.”

Still, he predicted “enormous breakthroughs” in the next five to 10 years as the technology is developed through research.

“I think the future is very rosy but we have to proceed responsibly and ethically,” he said.

Grekos, a cardiologist who began using stem cell injections as a supplementary therapy to his cardiac patients, predicted that even as researchers make more progress getting FDA approvals, “you’re going to see a groundswell of patients that are very frustrated with the system and are going to be going offshore.”

RNL is not even the only Korean company trying to tap the L.A. market. The Chaum Center is a new Korean luxury health clinic and spa based in Seoul that includes stem cell extraction and storage among a list of services that includes mineral baths and MRI scans.

It is marketing its services in Los Angeles and plans to open a local facility by early 2012. Stem cell banking will likely be a service and eventually the company may offer treatments, said Harlan Kleiman, chief executive of San Francisco consulting firm ReGeneration Centers Inc., which is advising Chaum.

“The thinking is that the Korean community is part of a foundation for something that is ultimately a part of a much larger universe,” Kleiman said. “But this is not just a Korean product, it’s an international product.”

Indeed, RNL opened a second California office in San Diego in September. There, more non-Koreans have been hired, and the office is not in a Korean neighborhood.

“Korean Americans have relatives who live in Korea and they are familiar with these kinds of therapeutics, so it was easier,” Hong said. “But Koreans are less than 0.6 percent of the U.S. population. This office is not our ultimate plan, but a starting base.”

RNL hopes to start clinical trials in the United States and ultimately get FDA approval treating specific ailments, starting with osteoarthritis, a disease that results in degeneration of cartilage and bone of joints. It has clinical trials under way in Korea.