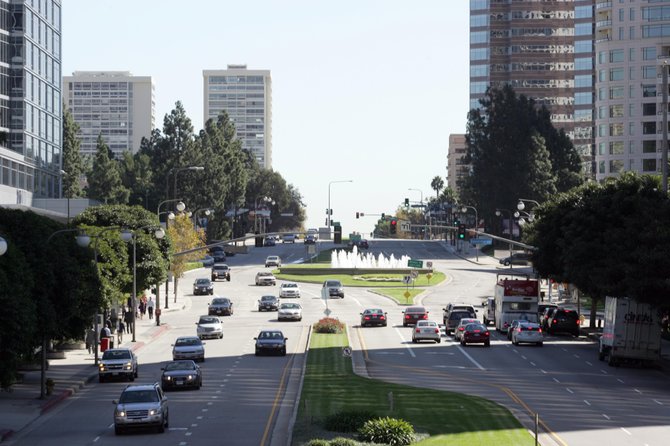 A Century City stop on the planned Westside subway extension has erupted into a battle between two major factions.

On one side stand most members of the business district. Pitted against them are their equally well-heeled neighbors to the east: the city of Beverly Hills and the Beverly Hills Unified School District.

At issue is whether the Century City stop on the $4.2 billion Purple Line extension should be at the edge of the business district along Santa Monica Boulevard or in its heart along Constellation Boulevard.

Many merchants and big employers favor the Constellation stop at the corner of Avenue of the Stars, arguing it would bring more customers and be closer to the large high-rises where thousands work.

The complication is that the Constellation stop would force the train to be routed under nearby Beverly Hills High School and several residences, causing school and city officials to balk over safety issues related to the necessary tunneling.

“Student and teacher safety should be paramount,” said Beverly Hills school Superintendent Dick Douglas, who, along with the school board and Beverly Hills City Council, approves extending the subway but vigorously opposes the Constellation stop.

Instead, he argues that the new Century City subway station should be built one block away at the corner of Santa Monica and Avenue of the Stars “the way it was originally sold.” Given the large size of the area’s blocks, that amounts to about a quarter-mile.

The disagreement is the latest wrinkle in the long effort to extend the Metro Purple Line, which ends at the corner of Wilshire Boulevard and Western Avenue. Late last month, the board of the Los Angeles County Metropolitan Transportation Authority voted in favor of a 9.5-mile extension largely along Wilshire Boulevard to the Veterans Administration health campus in Westwood. In doing so, it discarded other proposed route variants.

However, still to be determined is the exact route once the line reaches Century City, including the precise location of the stop in the business district.

Original route maps published in 2007 had simply shown a stop at Santa Monica and Avenue of the Stars. But after receiving public comment, planners in 2008 added the possibility of jogging the stop slightly west to Constellation. The draft environmental impact report approved by the MTA board includes both options.

Westfield Group, owner of the upscale Westfield Century City mall, is neutral on the issue. Its mall literally stretches the entire block of Avenue of the Stars, from one proposed stop to the other. But most local business people are strongly pushing the stop in the heart of Century City.

“We support the station at Constellation,” said Susan Bursk, chief executive of the Century City Chamber of Commerce, which represents hundreds of businesses. “We think that’s where the ridership will come. Not just employees commuting to the employment corridor, but visitors coming to shop.”

The MTA’s board is expected to consider and approve the final EIR – which would include its preferred option – by late next year. Construction would begin in 2013, with the project completed as early as 2022 if there are no delays.

The board will have to weigh the desires of both factions, as well as consider the environmental impact report, which will include the results of various geotechnical and environmental studies yet to be done. The studies will examine such factors as seismic effects, soil quality, hazardous materials, noise and vibration, safety, air quality and archeology.

“We will do the final analysis to see where the data takes us,” said Metro spokeswoman Jody Litzak. “I’m Switzerland on this. We’re completely neutral and have lots more analysis to do.”

Cameron Benson, general manager of Watt Plaza, a pair of 23-story office buildings on Century Park East, said that the overriding consideration for the MTA should be promoting the use of the subway – which she believes would tilt in favor of the Constellation.

“If they put it in the most convenient place it will be utilized more,” she said. “Century City is a vital economic engine for Los Angeles and this brings the subway right into the corporate hub. That would only contribute to the community’s economic vitality.”

However, an October letter signed by the entire Beverly Hills City Council sent to the MTA said that while the subway station should “serve the employment densities” of Century City, “of paramount importance is safety” and “it should not be at the risk of tunneling” under the high school and homes.

One solution, he said, could be the construction of escalators and people movers that would transport riders from Santa Monica to Constellation.

However, Lisa Schweitzer, a professor of urban planning at USC’s School of Policy, Planning and Development, said that tunneling beneath Beverly Hills could be done safely.

“The technology exists for it not to be a problem. From a transit point of view, Constellation is the better choice,” she said.

Both sides said they intend to continue writing letters and speaking at public forums to convince the MTA of their positions.

The school district, Douglas said, is considering hiring a consultant to weigh in.

Some Century City merchants, meanwhile, said they really don’t care which route is chosen, as long as the subway gets built.

One of them is Carol Brady, owner of the Pandora jewelry franchise at Westfield Century City mall.

“I favor a subway line at either of those locations,” she said. “They both would give us more traffic.”