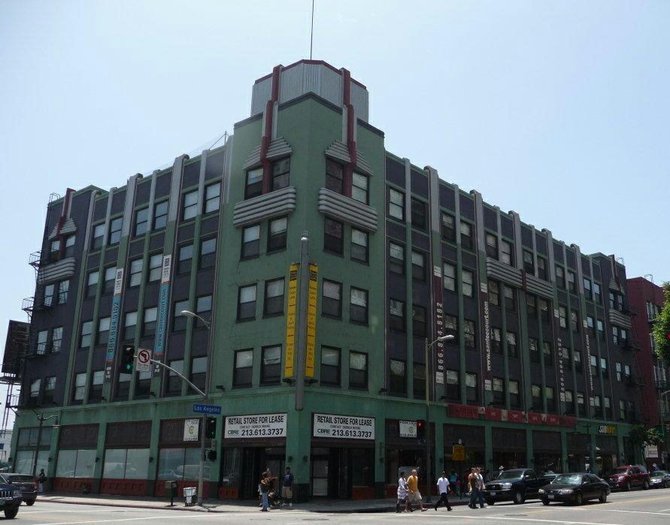 Last week, Beverly Hills real estate firm Kennedy Wilson announced that it had purchased with a partner downtown L.A.’s Santee Village for an undisclosed price out of foreclosure.

Now, the Business Journal has learned that the adjacent 165-unit Santee Court apartment complex has changed hands in a separate $31.1 million all-cash transaction.

Both the Santee Court and Santee Village projects, which share a courtyard and underground parking, were built by L.A. developer Mark Weinstein’s MJW Investments.

Greg Harris, a Marcus & Millichap broker who represented both sides of the deal, said Essex seized at the chance to acquire the apartment complex from L&B, which received eight offers.

The building, which is a redevelopment of a 1912 structure, has more than 38,543 square feet of ground-floor retail space. The units include 12- to 16-foot ceilings, stainless steel appliances and granite countertops. It is exempt from L.A. rent control statutes.

Harris said Essex plans to hold on to the project for the long term but may sell some units as condominiums if there is strong interest.

Calls to the buyer and seller were unreturned.

Broker Ron Harris of Marcus & Millichap, who is not related to Greg Harris, also represented both sides.

As most business people will tell you, dealing with the federal government is usually a time-consuming proposition. However, for G.H. Palmer & Associates, it also turned out to be profitable.

The L.A. luxury apartment developer recently refinanced its 752-unit Colony Townhomes in Santa Clarita with a $112 million loan from the Department of Housing and Urban Development.

Getting the loan literally took more than a full year, but the terms were highly favorable: The 35-year, fully amortizing loan is at 82 percent of the property’s value and at a fixed rate of 3.75 percent, said Gary M. Tenzer, principal and managing director of George Smith Partners, a real estate investment bank that handled the transaction.

While HUD loans are associated by many with affordable housing, the agency’s 233(f) program is open to owners of quality real estate in strong neighborhoods, Tenzer said.

“There’s a social policy in the country to foster housing and this helps support the housing industry,” he said.

Because of a lengthy time line working with federal officials, Tenzer said the program is not good for obtaining original project financing and is best left to refinancing.

The office is growing and looking to add employees who can build the company’s business lines in property and construction management, tenant representation, sales and more.

“The office decision itself really symbolizes our continued strategic growth,” Garfield said. “Over the last six years, as an example, we’ve been growing quietly and methodically, and we’ve nearly tripled the gross revenue in the Western U.S.”

“I expect we’re going to be expanding into our option space into 2011,” he said.

Transwestern did not release terms financial terms, but Garfield said the new lease rates were similar to what is was paying.

“We were able to attain a much better interior office environment with more expansion capability at a very favorable cost,” he said.